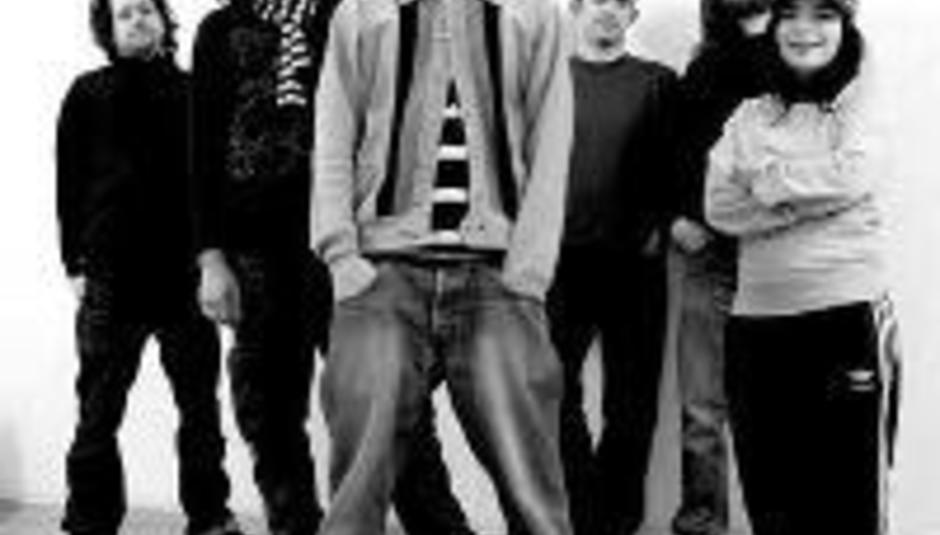 Electronica-infusing folksters, or traditional musicians toying with modern machinery? Either way, Tunng’s fusing of elements rooted in history and those echoing a future yet to unfold completely has earned them an array of plaudits, and their third and latest LP Good Arrows is one of the year’s finest albums to mix mainstream appeal with avant-garde tendencies.

The band – comprised of founder members Sam Genders and Mike Lindsay, alongside Ashley Bates, Becky Jacobs, Martin Smith and Phil Winter – emerged properly in 2005, when their Mother’s Daughter and Other Songs LP was released via indie label of much respect Static Caravan. Since then they’ve signed to Full Time Hobby, who released album number two, Comments Of The Inner Chorus, in 2006. Productive, then, the combo are, but don’t expect a new album next year. Things, you see, are picking up for the band, and live demands run high.

The sextet are touring the UK right now, and fly to the US after their London show at 229 to tour there ‘til early November. They’ve been particularly active on the festival circuit, too, as Genders explained when DiS got him on the phone ahead of a recent rehearsal.

Good Arrows came out the other month and has been really well received by the press. You must be happy?
It seems to be doing okay, yeah – we’ve had some nice responses.

One thing that quite a few reviews touch upon is that the album’s more ‘traditional’ than its preceding pair. Is this something you were quite aware of when making it?
I think… I don’t think it was especially conscious. I mean, I have something of a pop fetish when it comes to melodies, and I think… I guess we’d played around a bit more with things that were more ‘folk’, and I think when you make an album that has one type of sound to it you explore your other influences a bit when you come to do the next thing. I dunno if this is right or not, but I kind of think, with me and Mike… I think the first album sounds like me and Mike, you can hear who is doing what. With the second album that’s not so much the case, and I think with everyone else getting involved on this album, we’ve all got used to working together a bit more. So instead of being able to pick out individual bits, I think it’s got a more coherent sound. There’s actually loads of digital stuff going on – there’s field recordings and found sounds all cut up – but you don’t necessarily notice you’re listening to digital stuff. I think Mike is getting better and better at playing with sounds – you never really know what you are listening to, it just sounds really good. Mike’s getting a lot more skilful with what he is doing. I think, without planning it, the new album’s ended up more direct.

That sounds like one of your albums directly influences the form of the next. In that case, what’s in store for album four?
Well, we all have other things that we do, so life is a bit of a whirl at the moment. That being the case we’re not yet thinking about what we’re going to do next time.

I suppose you are busier these days, what with this UK tour and the American dates. Do you guys get much of a chance to practise much these days?
We had these three full days of rehearsals planned for this UK tour, and gradually little things have crept in and now our rehearsal time amounts to from 3 this afternoon through ‘til 11 tonight. If we’re doing a radio session or something we tend to have a quick sit down and work things out beforehand, or we’ll meet an hour before at the studio. We do the best we can really – normally if something’s really important you find time the night before to quickly have a run-through.

Is it tough getting together, what with the band now expanded to six from its original format of just Mike and you, and with members spread out geographically?
We all still do jobs – some of us have full-time jobs – and I’m doing a few side-projects, so maybe we didn’t properly anticipate things taking off the way they have. We’re kind of trying to squeeze everything in and not let people down. It’s a real adventure, and it’s lots of fun.

Everything seems to be happening pretty quickly for you – the debut was only two years ago…
It was just Mike and I to start with. And everything’s happened really quick – we’re having experiences that not everyone gets to have, and you’ve got to make the most of that.

You played a lot of festivals this summer: which were your favourites?
I love Green Man, although I didn’t spend very long there this time. We were there for an afternoon, and through ‘til the morning after. I’ve got to say The Big Chill was really good this year – it was one of my favourite gigs ever, actually. It was really good fun, and it was really relaxed. We ran into a lot of people we knew. Glastonbury was pretty great as a performance – it felt important that it went okay. That was relatively early in the summer, too, but now we’ve done 21 festivals, in a row! It’s been a bit full-on, but nothing was bad.

Twenty-one festivals? Surely not so long ago there was nothing like that many to even pick from, let alone play at. What are your thoughts on the state of UK festivals – are there too many right now?
There has obviously been a massive explosion in live music, and in people wanting to pay to go to see live music, and bands that don’t necessarily have a high profile are benefiting from this. It’s really positive. I don’t imagine all the new festivals will survive, because there aren’t enough people to go around so far as an audience goes. I’m not so much into the big festivals, but I know people who love that music and have a great time. It’s a personal choice really – I love the smaller ones. I am discovering more music, but it seems that there’s a bigger market now for going to see acts who are not that well known.

Finally, ‘cause I know your band mates are waiting: you began on Static Caravan, who’ve proven themselves to be an acclaimed launch pad label for a few artists. Who’s likely to follow you onto bigger and brighter things, do you think? Shady Bard, maybe?
I was going to say perhaps Shady Bard. I don’t know if you know Serafina Steer (DiS profile)? She is vastly underrated, but everyone who sees her thinks she is amazing. She’s a massive talent, and it’ll be a crying shame if she doesn’t make it. She plays harp and sings, and I don’t know if she has suffered a bit because Joanna Newsom did that last year. I think if people would listen to her… she writes incredible songs, which are twisted and dark in places, but really beautiful. I’m in awe of her as a songwriter. She’s out on Static Caravan, and that’s what they’re great at: finding people and helping them get a foot up without making things difficult. The result is that people move on, but that’s encouraged. Musicians are helped on their way.

Tunng are on tour now – see below for dates. ‘Bullets’, the latest single to be taken from their Good Arrows album, is released on Monday October 15. For MySpace, click here.