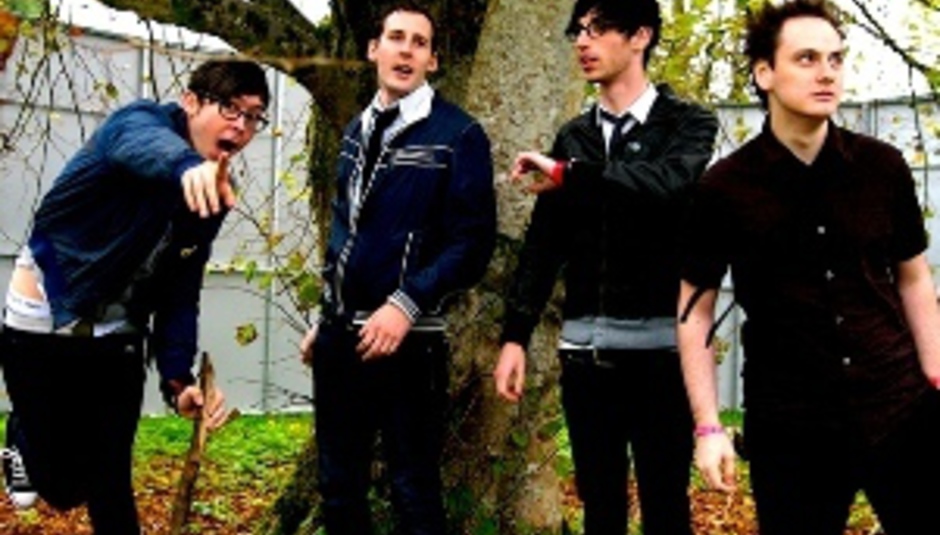 Today DiS will meet WATP during a leisurely photoshoot in Inverary, a mere three hours or so before their oh-so-surreal headlining slot on the YourSound unsigned stage at this year's Connect Festival (festival review here). The band are still in a state of shock at being asked to top such a prestigious bill...

Michael M: We're still flabbergasted at being asked to do this. That probably has more to do with the fact that it's such an amazing line-up. I mean, if we weren't playing it we'd definitely be here as fans. It's quite an honour actually...

Are all your families going to be watching your set later tonight?
Michael M: There are a few coming, yeah. I think all our girlfriends are gonna be there.
Michaeldrum: We hope they are!

You've played at several of this summer's major festivals; have they been as enjoyable as playing a show in a small club?
Michael M: I think we prefer playing festivals to be honest. I think one of the reasons is that you get to see so many of your favourite bands, so by the time we get to play you're already on a high having watched so many great sets.

Being asked to headline the YourSound stage suggests you are now seen as one of Scotland's brightest new talents. Do you feel any added pressure because of this?
Chris: We don't really think about it.
Michaelguitar: That's the first time we've heard it put like that; I think you've just put some pressure on us!
Michael M: Seriously though, yeah it does create a certain amount of pressure, although personally I like to think that we play every one of our gigs as if it's our last. That's not saying that we're thinking of calling it a day; it's just that we tend not to focus beyond the next show, and I hope it shows when we're on stage.
Michaelguitar: We always assume this will be our last gig so we'd better make a nice exit...

So no thoughts about packing it all in then?
Michaelguitar: No, none whatsoever. We're always too busy enjoying ourselves. We don't really care whether we're headlining or on first, just so long as we get to play our songs.
Michael M: I think we'd know when it was time to give it up and so would anyone watching us. We aren't going to go on and on aimlessly for years like some bands, either. People say longevity is the mark of success but we don't think like that; to us, it's about what we want to do at this moment in time that counts. As long as we make our mark, that's all that matters.

Your songs have developed over time, though. Even between the singles 'Less Than Three' and 'This Is Vanity' there is an obvious progression, so there must be some kind of focus.
Michael M: We've never consciously written or recorded a song with a gameplan; we don't think about radio play or current trends, either. Most of our songs emerge because all four of us agree on something we like. It's the same with our audience: we still play some of our oldest songs because we know it's what they want to hear. At the same time we've dropped some songs from the set after one show because those same people didn't like them, and in hindsight they didn't really stand out. We don't believe in sticking with one style. It's more about writing good songs, and if there's a variation of styles in the set then good. I mean, why would you want to write the same song over and over again but with different words?

The fact you are difficult to pigeonhole, though, will probably increase your longevity...
Michael M: Aye, perhaps, but everything about us is completely organic. I mean, we've only put two singles out to date so you'd expect any band at that stage to still be evolving. Or hope so at least...

Probably the first song I heard by you was 'Bulimia Sisters', which musically and lyrically sounds like nothing else this side of 2000. What inspired you to write that song?
Michael M: It's a song about secrets, and not actually about bulimia. It has a sort of claustrophobic feel; I suppose the lyrics are steeped in irony but at the same time it sounds trapped. A lot of people have picked up on it thinking it's the poppiest of our songs, but it's a strange one to us. I mean, it isn't like anything else we do, but sometimes we tend to play more for that reason than because we enjoy playing it. If that makes sense...

Your live sets are a mixture of both intensity and humour; how do you transpose that into the recording studio?
Michael M: It's really hard to capture us at our best in the studio. Again, playing live is such an organic thing; everything just happens as the show goes on. When it comes to making records, though, we have to play to people who aren't getting off on what we're doing, but are doing their day job so to speak instead, and although we understand and respect why they're there, it's nigh on impossible to initiate the same kind of feeling that you get from playing live.

So how do you get yourselves in the right frame of mind when you're recording?
Michael M: It's quite funny because once we said to this engineer, “Just try and make us sound the same as we do live”, and gave him this recording of one of our shows and it sounded terrible! I think I lose focus in the studio most of the time because I'm always thinking about food. I'll be thinking about eating a sandwich when I should be making a record and my concentration just goes...

What kind of sandwich?
Michael M: Chicken. Or cheese. Even now I'm struggling to concentrate because I know I've got a chicken sandwich in my bag...
Michaelguitar: I think there's more margin for error live as well. You can make so many mistakes live yet nobody will remember if they enjoyed the show, whereas the recording process is just total concentration.

Are there any plans to release any more records in the near future?
Michael M: We've just about finished recording the album - we just need someone to release it! Both singles have done alright but it's not like we're on the way to being massive or anything, but I do think people should hear our album. If only because of the fact we'll have gotten sick of it soon!

Surely there's been some interest in putting your records out, particularly on the back of the reviews you've received so far.
Michael M: There's been some but...
Michaelguitar: ...I think they haven't signed us because we're demanding a million pounds!
Michael M: A few people want to put out another single but no one has offered to release the album as yet. I think one of our main concerns is keeping our roots in Glasgow. We don't want to have to uproot to London just to get a record deal.

If the right deal was on the table at the right time though with the proviso that you had to relocate, would you consider it?
Michael M: Nah, I love Glasgow too much. I just think we'd lose our identity moving to somewhere like London. We've all grown up in Glasgow and I can't imagine us moving away, not in the foreseeable future anyway.

For more information on We Are The Physics, visit their MySpace. They will also be playing at Nottingham's Junktion 7 before the end of the year as part of Drowned In Sound's monthly club night.