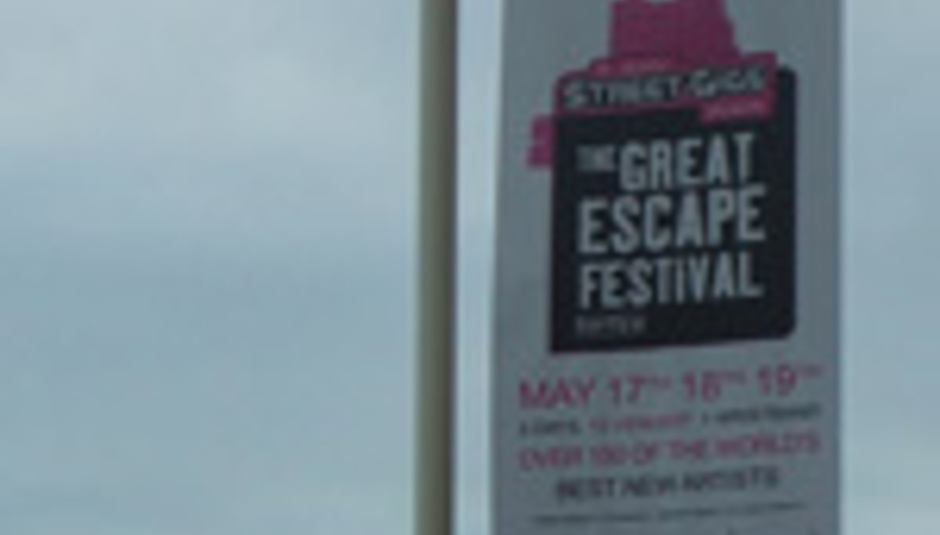 We left it a week – it needed space to breathe. Even now, every time I read this back I feel like a shoddy, poisoned mess of a human being. It seems like a good time when you’re sober, doesn’t it?

Either way, it was certainly a good time to be a DiS writer last weekend. While Diver, Denney and Strang bundled themselves into a car for the road trip West to Minehead and ATP's Versus The Fans, a handful of us made the shorter journey down to a wind-bitten Brighton as The Great Escape took the city for a second year.

Of course, you see a festival unravel in front of your eyes and a thread begins to emerge. I’d judge that the thread we followed through Brighton last weekend was one of easy comradeship; oiled by the usual tonics and rituals doubtless, but spurred on by fresh settings and playgrounds into something more than the old glug, glug, glug. To each of these ends, it makes sense to present to you this five-faced report from the front; letting voices buzz in and out like scatty radio to plug gaps in shared memory that now resembles the scattered shards of a lobbed beer bottle. Get me?

I spent Thursday revising for what was - fingers x’d - my last ever exam (retakes, though, are sure to follow). So, for now I’ll leave you in the capably incapacitated hands of the rest of DiS’s scattered army – Colonel Webb, Lieutenant Gwyther, Field Marshall Adams and Brigadier Leeson. Here’s a map, for the navigators among you. Carry on.

Rob Webb: Surreal is perhaps the watchword for The Great Escape. Finding yourself in the Sealife Centre, packed full of sharks (and toothy aquatic killers who don't work in the music industry), watching Land Of Talk's Elizabeth Powell doing her solo thing in front of a fish tank within minutes of arriving in Brighton... DiSorientating.

Debbie Gwyther: I get lost in the Sealife Centre. Walking through dark alleys surrounded by sea creatures, ‘Monster Hospital’ starts to play over the PA before we finally arrive at a shark pool - very surreal.

It’s up to Sean to cut through the surrealism and case the event that kicked off the weekend in the honorable language of reason and clarity.

Sean Adams: Land of Talk play in front of terrapins.

Cheers man. Rob’s on the think…

RW: I spend too much time post-Sealife Centre pondering whether the word 'vampiree' exists... I mean, you have employer and employees so why not? Also, a good way to save blood is to hide your name tag. A band named Eternal Erection have their own bus, parked on the seafront, from on top of which they deliver sets of sub-Chilis funk numbers to between two and nine people, but never more than ten. They’ve driven all the way from Finland to do this - they've got spunk, for sure.

We’ll run into Eternal Erection again tomorrow. Putting Finnish bus-funk aside for now, the first review of the weekend finds us in more familiar territory.

Youthmovies
RW: They’re signed to DiS but I've got bugger all to do with the label so I'm allowed to pick them as one of my top three bands, okay? Playing for the first time tonight with strings it could have all gone horribly wrong but, to my ears, that certainly wasn't the case - there are even some smatterings of sunny melody beneath the noise which represents something of a sea change (sea what I did there? Sorry, my brain is still fried) from the last time I saw 'em. Nice, nice, nice.

Billy’s here, and reckons he’s got something more than decent to recommend for you’s ears; even if he has peaked desperately early.

The Envy Corps
Billy Leeson: My favourite band of the entire festival - brilliant tunes, no effort made, but none needed. A band everyone should see next time they are in the UK.

Back at Zap, a Reading yoot is reppin’ my ends – kinda. Maidenhead’s the next big stop east along the tracks; so I'm claiming.

Laura Marling
SA: In a parallel universe Laura Marling is playing the Queen Vic, singing a duet with M.Ward between pulling pints and putting the world to rights. She’s wise beyond her 17 years, and not just musically but lyrically and emotionally, too. It’ll break our hearts even more if she doesn’t become bigger than Winehouse.

Shouldn’t be too hard, though AW's head is disproportionately large compared to the rest of her body. Hypocrisy? Whatever, Billy’s discovered something altogether less delicate up the road…

Les Breastfeeders
BL: Crazy rock! But it was in time and really confident. The lead guitarist holds his hands to the sky after every song, like he’s a boxer. He’s also doing the windmill with his guitar, which everyone thought was dead.

The Happy Mondays gig tonight on the pier means that Brighton is littered with a few original cast members of 24 Hour Party People. Yeah, I know it wasn’t 100 per cent accurate. But that’s what happens when you let celluloid dictate your legacy. Truth.

The Besnard Lakes
RW: I'm half certain I spot Bez watching The Besnard Lakes... or maybe it was all a dream. Either way, I laughed. Beardy-weirdy Canadians with a penchant for both prog and Brian Wilson-ish pop, The 'Lakes never quite manage to reach the dizzying highs of masterful second album …Are The Dark Horse, but still put on a pretty darn impressive show. To my whiskey-sozzled eyes, singer Jace Lasek looks a bit like Phil Spector tonight, but even in my drunken haze I know he isn't - his wife, stood next to him on bass and backing vocals, isn't ridden with bullet holes. The gap between Shoreline and Gallows at NME’s Komedia show is suspiciously large. It’s filled by some band from Oxford playing their first ‘secret’ gig of the weekend.

Foals
SA: Foals’ CHOON-laden set at Club NME more than makes up for Cut Off Your Hands cancelling to record their album with Bernard Butler. Tonight they blast the room with sharp angular shards of disco balls, like '70s prog mash-ups never happened. By the end of the third song my Vans are utterly beer-battered.
DG: The Scare played at Beach Club – the singer threw himself into the audience and writhed around the floor. Very entertaining, and watched by an audience that had no idea what to expect, Gallows included. Next up it’s Foals and Gallows at the Komedia – mosh pit shenanigans ensue and Sean makes James Jam [Former DiS writer in a Gallows tee, now NME new bands ed] get involved, before The Scare join them onstage for the last song. Steph Carter, Frank’s brother, has to go straight to hospital afterwards – he got bottled and has a deep cut behind his ear. Sean thieves beer from a 24-hour shop and then it’s drinks at the Queens 'til 6am. My sister and I wake up with two boys in our room that we’d only just met and a bewildered looking Billy – that boy is unwakeable.

Gallows
RW: Gallows are utterly atrocious. Sure, they can posture, spit, swear and even leak blood, but no tunes does not a good band make. They thank James Jam from the stage and rightly so because they owe him every penny they've ever made.