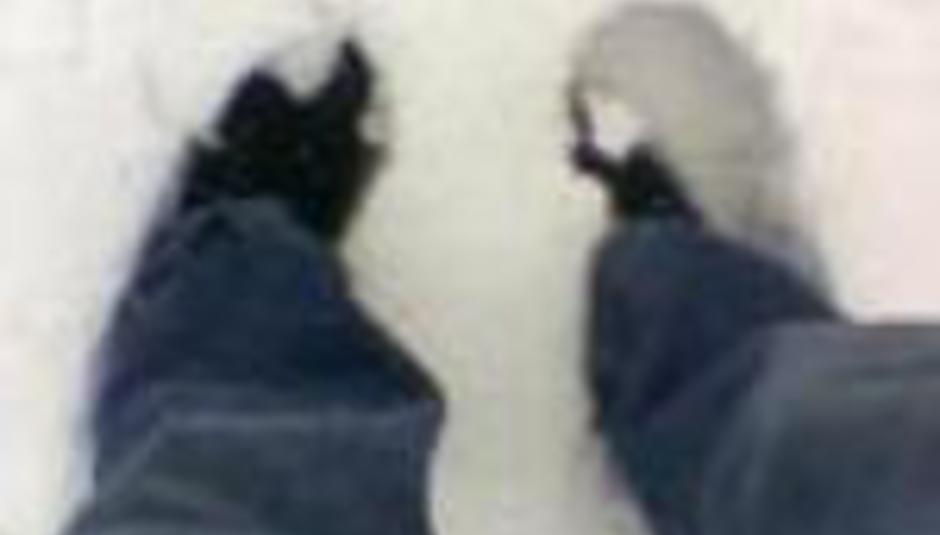 So there’s me, in bed, still in that delightful state of being neither fully awake nor out cold, and the girlfriend’s leaping about and the curtains are open and it’s all “snow snow snow” and the radio newsreader’s telling me not to travel unless I really have to and I’m desperate to drift off again but before I know it the duvet’s off and I’m marched to the kitchen window to gaze at a garden smothered with six inches of the stuff.

Great. All that means to me is an extra 40 minutes journey time on the way in (and probably more on the way home), and cold feet since I’ve no suitable footwear for such weather (see picture – brrrr). A sensible man would stay home, playing Sensi, drinking tea and eating crumpets. But DiS folk are rarely sensible. Our brains are too beer-addled for such thought processes to reach their conclusions.

You, though, might’ve chosen wisely. Perhaps – hopefully – you’re at home, looking at sparkling flakes falling and turning the gas fire up another bar. There’s probably something educational on UKTV History, but three bets you’re watching CBBC. Good one. Although, good one for still finding the willpower to turn your Mac or PC on and clicking your way here. We’re lonely in our snowed-in basement, and are turning to comfort songs to get us through our eighth cup of something warm and brown; to songs for snowy days and nights, that glitter like a morning’s frost and crunch like freshly laid underfoot.

Below, we’ve assembled a playlist for the snowed-in and alone. Enjoy for a while, and then head out for a snowball fight with the primary school kids at lunchtime.

Au Revoir Simone 'Fallen Snow'
From the album The Bird Of Music, forthcoming on Moshi Moshi.
Listen to this song on their MySpace

Low 'Last Snowstorm Of The Year'
From the album Trust, released on Rough Trade in 2002.

My Bloody Valentine 'Soft As Snow (Warm Inside)'
From the album Isn’t Anything, released on Creation in 1988.

Regina Spektor '20 Years Of Snow'
From the album Begin To Hope, released on WEA in 2006

Jeniferever 'Winter Nights'
From the album Chose A Bright Morning, released on DiS in 2006.

Watch the snowy video to 'From Across The Sea', from the very same LP.

Hood 'Winter 72'
From the album Outside Closer, released on Domino in 2005.

The Russian Futurists 'It’s Not Really Cold When It Snows'
From the album Me, Myself And Rye…, released on Memphis Industries in 2006.

90 Day Men 'Silver And Snow'
From the album Panda Park, released on Southern in 2003.

Stapleton 'Icy You'
From the Icy You EP, released on Gravity DIP in 2002.

Yo La Tengo 'Winter A Go-Go'
From the album Summer Sun, released on Matador in 2003.

Super Furry Animals 'Northern Lights'
From the album Guerrilla, released on Creation in 1999.

The Fiery Furnaces 'Tropical-Iceland'
From the singles collection _EP_, released on Rough Trade in 2004. Watch the video:

Björk 'Joga'
From the album Homogenic, released on One Little Indian in 1997; of course, you could pick any song from this LP or its follow-up, Vespertine. They all sound as if they were recorded in the middle of a glacier.

And the songs for all the travel chaos…

Death Cab For Cutie 'Gridlock Caravans'
From the special edition of the album The Photo Album, released on Fierce Panda in 2005.

Mogwai 'Travel Is Dangerous'
From the album Mr Beast, released on Rock Action in 2006. Watch the video here.

And because snow doesn’t half get boring after a while…

Cable 'Honolulu'
From the album Sub-Lingual, released on Infectious in 1999; alternatively, of course, you could have ‘Freeze The Atlantic’, but that’s still wintry of title. So boo to that.

And we didn’t even have room for…

Sigur Rós 'Untitled 1' From the album ( ), released on Fat Cat in 2002. Because it sound-tracked that photograph, up there; watch the video here.

Nick Cave And The Bad Seeds 'Fifteen Feet Of Pure White Snow'
From the album No More Shall We Part, released on Mute in 2001. Because it’s Nick Cave, end of; watch the video here.

DiScuss: What songs would you play to soundtrack a day spent either in the snow or watching it from the warmth of a fire-lit living room?