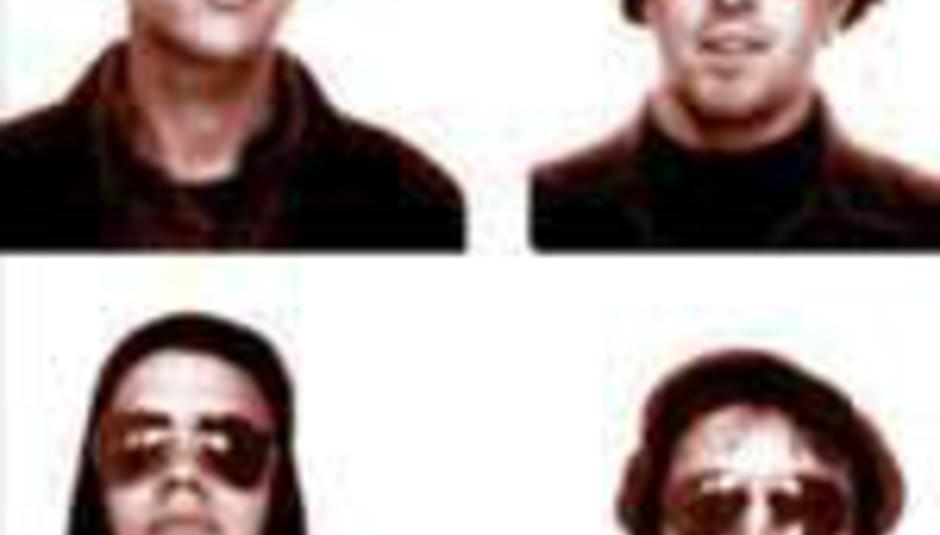 by Mike Diver May 5th, 2005
From the sands of time… well, September 2004. This interview was originally intended for the second DiS magazine, but since that fell by the wayside, it’s now here. Um, yeah… read on.

I don’t know how to best phrase it: is it The Constantines, or just Constantines? I’ve met the band once before this interview, and despite our time together I still don’t know. So, for the duration of this piece I shall refer to the best band to come out of Canada for a lifetime as another ‘The’ band. Please, don’t hate me.

Well, okay, hate me but not the band. I can live without your friendship, but you shouldn’t really be without a record by The Constantines. Formed in Ontario in 1999, the original quartet – Bryan Webb on guitar and vocals, Steve Lambke on the same, Dallas Wehrle on bass and Doug McGregor on drums – expanded to accommodate keyboard player Will Kidman prior to the recording of their second album, and their first to get an official release in the UK, ‘Shine A Light’. The record was picked up by Sub Pop for worldwide distribution, with the exception of Canada where the band are still signed to Three Gut Records, and acquired substantial praise, much of which concentrated upon Webb’s vocal similarities to Bruce Springsteen and Joe Strummer. Sub Pop have recently released the band’s eponymous debut for the first time outside of Canada.

“I’m happy that the record is coming out,” says Lambke via email; if you think DiS has the funds to fly me to Canada then you’re very much mistaken. “We don’t want to make a big deal out of it. It’s a record we made a few years ago, and I think it’s really good, but I’m always more excited about what we are about to do than what we have already done. I hope people take it for what it is.”

The two albums, whilst not as different as those of other acts suffering from awkward second album syndrome, aren’t exactly like-for-like. (A three-track EP, ‘The Modern Sinner Nervous Man’, emerged in-between releases through Seattle’s Suicide Squeeze label.) Kidman’s keys add substantial, almost tangible depth and a previously unrealised urgency to ‘Shine A Light’, and the record owes as much to rhythm and blues and soul music of old as it does contemporary punk or the combat rock of The Clash, to whom the band are frequently compared. The eponymous album comprises the blueprint – it’s a little rough around the edges for sure, but the intentions are commendable. “We want the death of rock and roll,” states Webb on opener ‘Arizona’; ‘Shine A Light’ is proof positive that they’ve not killed it as such, rather reinvented it according to their own unique specifications. Such evolution must be noticeable from the band’s perspective…

“When I hear the first record I think we sound really young. There’s something really exciting about those times – making a record with no expectations placed upon you, making it entirely with your own energy, from your own desire, with very little self-consciousness, because you don’t really expect anyone to hear it. We didn’t even know if anyone would put the record out. It was exciting times, meeting Lisa and Tyler at Three Gut, meeting and playing shows with Royal City and Jim Guthrie… it was like our little club, our little gang. I haven’t actually listened to the record in a long time.”

The Constantines visited the UK for the first time in early 2004. The show I attended – at London’s Buffalo Bar – bowled me over, and I’ve been in love ever since. Here was a band that not only sounded the business, but looked and, more importantly, lived the part too, even on the smallest of stages. Webb and Lambke thrust forward into the crowd, mic stands in hands, imaginary warpaint splashed across their brows; said crown didn’t know whether to embrace them as returning heroes or run to the hills. Words like revelatory are overused, but nothing else really sticks. It was super-kinetic… a punk-rock pressure cooker… jaw-dropping… revelatory.

“2004 has been quite a blur, [but] it’s peaks and valleys, good days and bad days. The shows in the UK were great, and the turnout was totally surprising. The first time we go anywhere we don’t expect to play to anyone, but the shows were packed, particularly in London, but also in Leeds and Glasgow. It was fun. We met some great people: the charming Joe Porn, the elegant Paul Frith, the mysterious John Israel Black and the beautiful and beguiling Pria. We ate bangers and mash and drank tea. And a lot of beer. The Constantines enjoy beer, whiskey and whatever you’re buying. I saw Olafur Elliasson’s ‘The Weather Project’ installation at the Tate Modern and I’ll never forget it. We’ll make it back to your fair country someday soon.”

Likewise, I’m unlikely to forget the band’s blistering performance – the image of Kidman twitching like a bug on an electrified fence is forever indelibly burned into my brain. The records also remain a permanent fixture up top in moments of surrounding silence – lead single from ‘Shine A Light’, ‘Nighttime/Anytime (It’s Alright)’, regularly starts up from the depths of my grey matter, the tiny voice midway through asking me to “turn it up!” echoing around my earholes. It’s perhaps needless to say (but stuff it, I will anyway) that The Constantines aren’t your average punk rock band. There’s more to chew on here, more nourishment, more flavour… Why don’t other bands, with similar disparate influences, sound this damn good?

“They don’t read enough books. Plus hockey, they don’t watch enough hockey. Books and hockey. Bands are mysterious. They are chemistry experiments. We should ask Doug sometime, since he’s the resident chemist.

“I just call us a rock band. Lisa from Three Gut says I’m the punk in the band, [but] punk is a strange thing. It means different things to different people. We’re people, not just punks. We play music, but I’m not a musician. Sometimes we’re abrasive, sometimes we’re sweet, sometimes we’re a failed Canadian bar band.”

Somehow I can’t picture The Constantines as a failed bar band, unless this, for them, constitutes failure. Lambke says he prefers to look forward than backwards. Well, so do I – how is the next album progressing?

“We’re pregnant. It’s hard to say what sort of a baby it’ll be, but we’ll love it no matter what. Music, like babies, needs love.”

Music, particularly your record collection, needs The Constantines. Or Constantines, whatever…