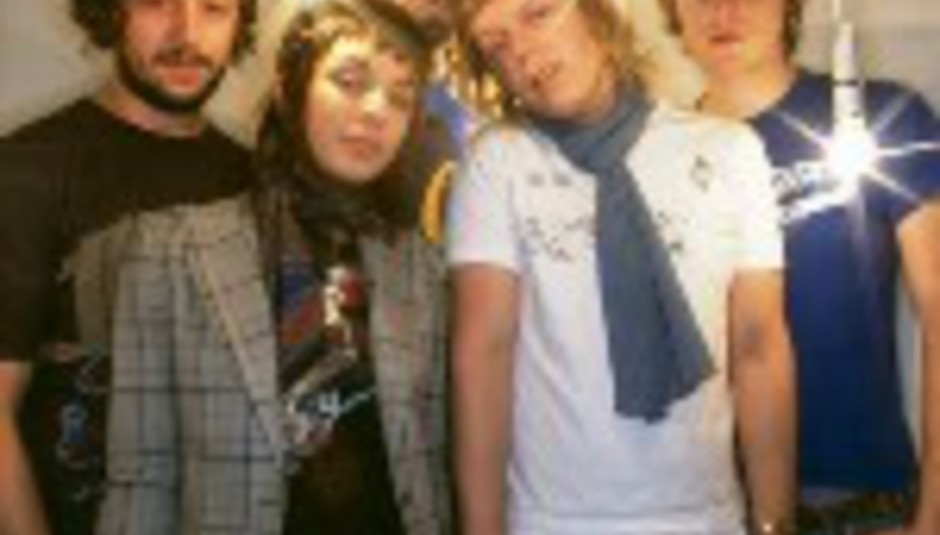 by Mike Diver March 14th, 2005
Set Fire To ’05 moves into March, and the sun is threatening to make a reappearance. That being the case, what better time is there to get all progressive? Let the sun shine down, and the riffs go on forever...

Setting things on fire is a fine art - it needn’t always involve aggression and fury. Whilst previous Set Fire To ’05 interviewees have explored the rawer side of the rock spectrum, London-based quintet Pure Reason Revolution craft spectral, ambient soundscapes that tip hats to the influences of both Pink Floyd and their pop-prog peers, the sun-kissed harmonies of The Beach Boys and today’s superlative post-rockers. One listen to their new, limited-edition single, ‘The Bright Ambassadors Of Morning’ (through Holograph), is all that’s required for their epic, progressive genius to become face-smackingly apparent. At 12 minutes long, the single - the band’s second following the Poptones-released ‘Apprentice Of The Universe’ in 2004 - isn’t exactly Top 40 fodder. Then again, what that’s good ever is? What that is fresh and exciting ever breaches the uppermost echelons of the pop pyramid? Um, Pure Reason Revolution, possibly...

“‘Bright Ambassadors...’ is the longest track on the record. Some don’t even make four minutes.” says lead vocalist Jon Courtney, referring to his band’s forthcoming full-length effort, due for a June release. But the song is certainly an anomaly in the popular musical sphere - why release a 12-minute song as your second single when surely immediacy is key at such a stage? “I think it’s really important to be ambitious!” says the singer. “If you’re not going to stay determined and focused, or push yourself then what’s the point?”

So you’re not worried that a John Peel/Yes reaction may follow? (Peel called Yes the worst band in the world, and it’s hard not to hear similarities between the prog dinosaurs and the music PRR are making today.)

“Who cares what people say?” Courtney responds. “Great bands have always been either loved or hated, and that’s already started for us. It’s bands that nobody has strong feelings about that never go anywhere. ‘Bright Ambassadors...’ works great live, and always goes down well. Also, it is a genuinely limited-issue release. It’s kind of an introduction to PRR.”

Back to the prog - it’s really, really hard not to hear traces of one’s father’s record collection in both ‘Bright Ambassadors...’ and its preceding release, the rather shorter ‘Apprentice...’. The question has to be asked: you grew up on prog, right? Your parents made you listen to the Floyd and ELP, right?

“My first musical obsession began with grunge at around the age of 12, and I was fixated with Mudhoney, Nirvana and Sonic Youth. But yeah, my dad would grab me and get me to listen to stuff like Pink Floyd, Yes, The Beach Boys, Led Zeppelin, ELP and Soft Machine. To be honest, I found it hard to relate to the progressive stuff at first, but then I found myself dipping into (my dad’s) vinyl and sneaking upstairs for listens!”

And is there a space for your updated take on prog-rock in today’s commercial music market?

“We simply view ourselves as a contemporary rock band. The 60s and 70s were amazing eras of invention and experimentation, and obviously there were some incredibly commercially successful bands from that period. Though some of our songs are longer than your average three minutes and may not follow ‘conventional’ structures, there are still strong hooks, interesting turns and exciting melodies. Perhaps we are a little more challenging than the norm, but give us a listen and then make up your own mind. We want to spearhead a movement, and it would be great if our success helped to pave the way for other like-minded acts.”

“The name came about as I was piecing together a thesis on the ‘Construction of Genius’. While reading various works by Immanuel Kant and taking in the troubled life and times of Gerard de Nerval - the chap who is said to have been the inspiration for the surrealist movement - the name flew at me as if I was deep inside the parallels between dreaming and meaning!

“Actually, that’s a lie. It came to me while watching Transformers The Movie.”

Ha ha, yeah... Transformers... “Me Grimlock kick butt...” Awesome. Anyway, what’s 2005 hold in store for you? Also, if readers take a liking to your songs, what other UK acts are out there that’ll warrant investigation?

“Well, the album’s done and will be released through Holograph in the UK and Or Music in the US simultaneously in June. In the US, ‘Bright Ambassadors...’ already features on a leading Billboard journalist’s answerphone message! Reactions there have been great so far. There’s dates booked for South By South West, New York, Philly, Boston and Montreal in March. Then, when we’re back in the British Isles, we’ll be touring, touring, and then doing some more touring.

“I’m not sure that there’s anyone else much like us, but Mystery Jets are referred to as ‘progressive’”.

‘The Bright Ambassadors Of Morning’ is released on April 4th.
Pure Reason Revolution’s website can be found right here.

Keep ‘em peeled for upcoming Set Fire To ’05 interviews/profiles with Bullet Union and Lords, to name but two!