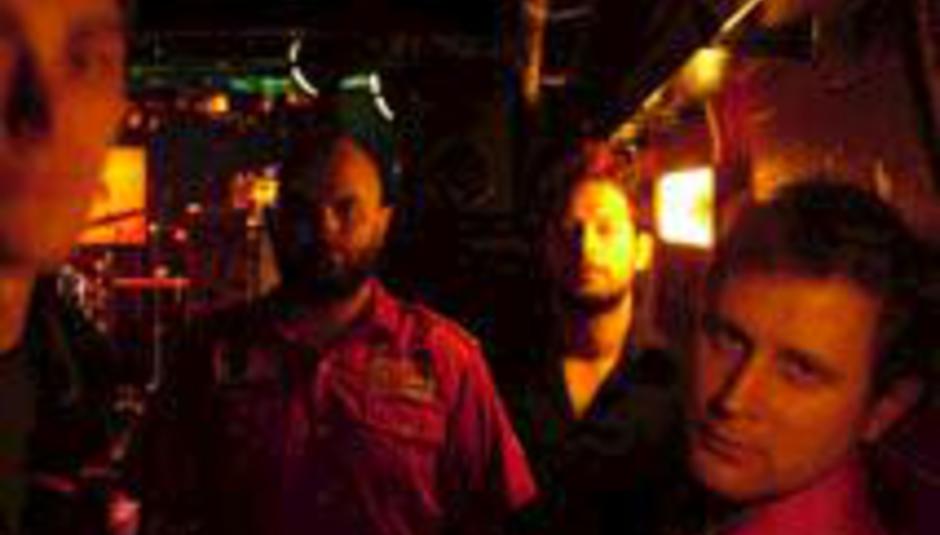 Short of a popular crisp brand, there’s not all that much that springs to mind when someone says ‘Leicester’ to you*. In fact, Gary Lineker’s solar panel ears aside, there’s exactly diddly squat. So it comes as some surprise that such a city can produce a rock band as, well, rocking as TEAM. Unclog your listening gear and wrap it around this; it’s some kind of sonic nirvana.

(*In my defence, I’m a know-nothing southerner. No doubt plenty of things spring to mind if you’re from the region.)

Indeed, such a description is somewhat appropriate: of the many comparisons made to date, the name Nirvana pops up as frequently as gangly Peter Crouch at gashed-up set plays. Alongside that band appear a number of rock legends: Mogwai, Helmet, Shellac and Fugazi, for example. (At a deeper level, think the unhinged fury of Bastro and the complex, off-key quirkiness of Joeyfat.) So, how’d it happen? How did four guys from the Midlands craft one of 2004’s finest British albums, The Penalyn LP, and how, exactly, are they going to follow it in 2005? DiS digs deeper underground to find out... your respondent, one Scott West.

The name, TEAM, suggests some kind of unified mentality, it implies that you’ve common goals. Care to expand?

TEAM represents the focus we have as a band, all driving in the same direction. A formed unit, all working towards the same goal, which is to be the best bands we can be and to try and get as many like-minded people to listen to our music. We hadn’t played in bands since school, so just getting to make the noises we’ve had in our heads is amazing.
The name, TEAM, is capitalised for emphasis, plus it just goes well in print. It adds that extra kick, which is reflected in our music - capitals just look better!

The bands you’ve enjoyed comparisons to have come from right across the rock board, sub-genre wise. Indeed, so diverse have the comparisons been that it almost suggests that TEAM are a band operating outside of regular categorisation. Presumably you’re happy to be regarded as simply a ‘rock’ band, rather than an insert-prefix-‘core’-end-with-random-suffix outfit?

We have been compared to a lot of completely different bands, some of which we’ve never heard of! People find it hard to label us because hopefully the music’s got something original to it. Comparisons to Nirvana and Fugazi come as a surprise but are very flattering - if we could emulate even a small part of their magic, then we’re on the right track.
I suppose ‘rock’ is the best way to describe us, because it encompasses everything. Being pigeonholed into a genre is a bit lazy in terms of trying to describe music. Saying that, we have described ourselves as purveyors of ‘guitarnoisepop’ - we’ve kinda created our own pigeonhole that we can live in!

You were recently featured in rock sound as a ‘buzz band’ - are more ‘recognised’, i.e. commercially available, magazines et al starting to take notice of what you’re doing?

Being a buzz band in rock sound was great - it’s nice to know that people are getting into what we’re doing. Other aspects of the music press have been starting to notice us, which again is great. We’ve been really chuffed with the nice things people have said about TEAM.

Do you particularly crave, or even care at all for, critical success?

I suppose all bands do to a certain extent, but it’s live that we’re best represented and hopefully that’s reflected in audience response. Having said that, we’re really excited about the next album.

You mention your live performances. They can be utterly brutal on occasions, yet also retain a sense of melody lost by so many heavy rock bands. Is the balance between noise and melody an important one? Do you crave the crushing noise?

We don’t really think about it - there is definitely a balance between the two, but it just happens naturally. It must come from all the different music we love. But there’s nothing worse than just ‘one sound’ for a band - all the best bands mix it up a bit.
There’s a journey, a path our music takes, and if we were one-trick ponies it’d be a dull one at best! The noise wouldn’t really be noisy if there wasn’t the softer, melodic buts. And, having pedals at your feet all the time, it’s hard not to hit them every now and again!

You’re part of the blossoming Captains Of Industry stable - what’s it like to be involved with a label that’s going from strength to strength right now? How’d you initially hook up?

Captains are great, and they’ve provided us with fantastic support. They heard ‘[50,000][Dead Sharks]’ (TEAM’s debut single) and liked it. We then recorded five more tracks and - hey presto! - stick ‘em together and we had the album. It really was that simple.

What about staying on an independent? Are you the types to say no to a major should they come calling? Does it matter to you, particularly?

In terms of staying ‘indie’, we’ll just have to see what happens. Our ethic is very clear and straight forward: we’ll always be DIY in our approach, no matter where the music takes us. Creative control is vital to the band, and the thought of a label throwing money at us and us having to change our direction doesn’t appeal to us at all. Unfortunately though, it’s so difficult to get onto the ‘next level’ without someone, somewhere, pumping money into the system. It’s a cutthroat business, of that we’re fully aware.
As usual, the main thing is to get as many people as possible to hear the stuff we make, and at the moment the relationship with COI is perfect, a true partnership.

What of your 2005 plans? This series of interviews is designed to highlight what you’ve got coming up this year, so that our readers are 100 per cent aware of what they should be spending their hard-won cash on...

2005 is shaping up nicely. There will be a free download single in April, and a few dates to support it. The recording of the next album, The Line From A-B, will commence in June and the album will be released on September 27, one year on exactly from The Penalyn LP. Hopefully there will be tour supports with a couple of cool bands, that’s all in the pipeline. We’re looking to produce our first video in August.
Getting out and playing is what drives us, and we wanna make the best record we can, as we can’t be sure what will happen. Making a great record is definitely our main priority for 2005.

And what about other UK-based bands? Are there any that readers should not only be aware of, but that they should be going to see and supporting however they can?

Love Ends Disaster!, Tired Irie, Ideals Grace, Teen Amateur and Kiajaroovah are all great bands from the East Midlands who congregate around the Pineapster music forum.
Then, there are amazing bands like Part Chimp, Lords and Hell Is For Heroes, all of whom we have had the honour of playing with. The Captains roster is rapidly growing, too - The Sound Explosion, We Will Be Pilots and Peace Burial At Sea are all worth checking out.

Keep ‘em peeled for future Set Fire To ’05 interviews featuring Lords, Bullet Union and Kill Yourself. More to be announced!