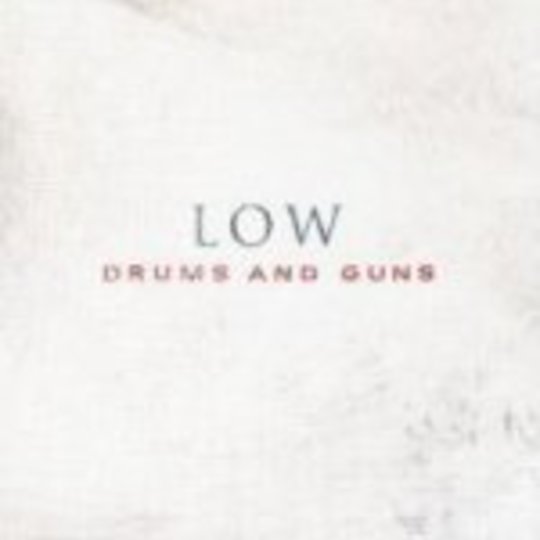 2007 marks Low's 14th birthday. It may be hard to believe, but the band have been weaving their majestic slowcore yarns for nearly a decade and a half. In that time they have created some of the most vital and depressingly underrated pop (for whilst Low's music may not be popular to the mainstream, they definitely aren’t a rock band) music spanning the time since their birth to the present, barely changing their desolate, minimalist formula until 2005's The Great Destroyer, the band’s own puberty if you will. Since then they have split with long-time bassist Zak Sally and recruited Matt Livingston, bassist for Low semi-side project The Retribution Gospel Choir, and have again delved further from their roots.

Due to its sonic left turn and lyrical (spiritual?) maturity, many will lazily label Drums And Guns as Low's Kid A. However, it is with Radiohead's own Amnesiac with which a real similarity can be found – on on both records there is an eschewing of slow evolution, brought mainly by a near complete change in instrumentation and ambitious, if somewhat overshadowing, production. See 'Sandinista' and album closer 'Violent Past', two songs strummed sweetly and slowly in typical fashion across their last UK tour now riding spluttering electronics and marching-band drums. While this new production offers a different light on the three-piece, it is often shining so bright that it’s hard to get a clear picture of the actual record at hand, with producer Dave Fridmann’s presence almost as strong as the band’s.

Luckily, singer and guitarist Alan Sparhawk's songwriting is as reliable as ever, and if anything these changes have resulted in a wholly more focused approach than could be found in earlier releases. Most tracks are clearly distinct from previous ones, and while classic albums Things We Lost In The Fire and Trust glided from song to song and some, the likes of the surf-guitar Yo La Tengo-esque 'Hatchet' here sounds like a real single. It makes the line “they will play our songs forever on the radio” a little less ironic.

Yet despite this Low have not branched out far enough to tear the roots out from under them, and the cold Duluth wind that surrounded the birth of the band still rustles the neck of most tracks, with 'Take Your Time' and album highpoint 'Dragonfly', a dulcet meditation on the subject of addiction, reaching back to the fractured isolation that dominated their debut full-length, I Could Live In Hope.

Drums & Guns is likely to split opinion to a greater extent than any other piece of Low's extensive catalogue, but avid fans should not be put off as behind the challenging production and at the centre of all their controlled experimentation lies one of the band’s strongest releases to date. Here’s to their next decade and some.