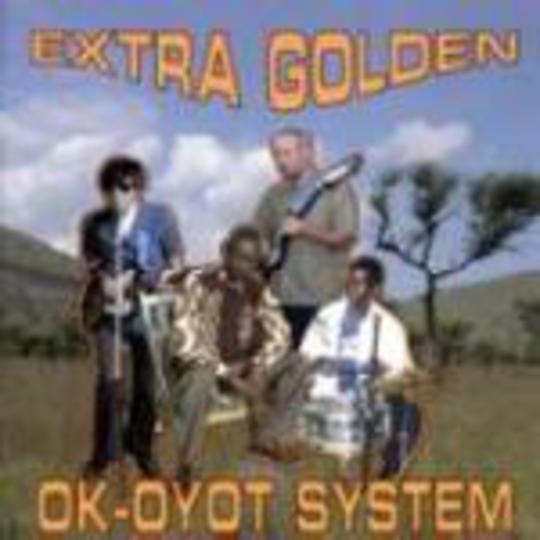 Now bear with us here, because there’s quite a back-story to be told prior to any ultimate recommendation.

Ok-Oyot System is a collaboration between DC outfit* Golden’s Ian Eagleson and Alex Minoff (the latter also plays in Weird War) and drummer Onyango Wuod Omari and guitarist/singer Otieno Jagwasi of the Kenyan benga band *Orchestra Extra Solar Africa (hence the name Extra Golden). The latter musician died in 2005 of liver failure, and this album is dedicated to his memory. He – Otieno – met Eagleson in 2000, and assisted the American in his study of benga (guitar-led dance music, popular in Kenya since the Sixties); in 2004 Eagleson visited the African nation for a year, to finish his thesis on the its popular musical style, and Extra Golden was born over a portable laptop ‘studio’.

What sounds a little too WOMAD for many tastes is actually a very accessible album, though, with Otieno’s lyrics every bit as essential to the overall sound and feel of this genre-splicing record as those of the English speakers. Granted, the likes of this writer has no idea what’s being said, but there’s an obvious tenderness in the lyrics of ‘Nyajondere’, a song written by Otieno for his ex-wife, that comes through regardless of the language barrier.

Defiantly lo-fi and low fuss, this collaboration isn’t the sort that finds its way into the collections of stereotypical world music fans – it’s simply too difficult to accurately pigeonhole, to slot beside so-called ‘traditional’ African releases. It swoons and sweeps, twangs and bangs but, most of all, it swings, gently and gracefully and in a fashion that ensures indie-rockers can get a flavour of Kenyan music without feeling like a sandal-wearing says-a-lot-but-knows-little sort, one whose entire experience of Africa is two weeks in a secure safari park and a couple of days’ sailing up the Nile.

Although tinged with sadness – the title translates as ‘It’s Not Easy’ – Ok-Oyot System is a record of celebration, and deserves investigation by anyone with an appetite for discovery.

The Murder Of Tom Fitzgerril