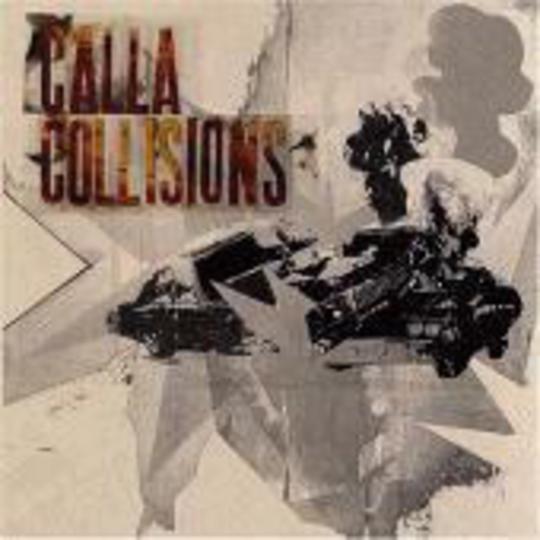 New York trio Calla share their name with a beautiful yet potentially deadly lily, and one listen to Collisions should tell you why. This is dark, brooding, sinister music trying to pass itself off as 40 minutes of spine-tingling rock, even if at first listen it appears to be delivered with a hint of... Dandy Warhols?!

Sure enough, Calla’s fourth long-player (their first for Beggars Banquet) opens with the single which preceded it. 'It Dawned On Me' is a driving, stomping song topped with a reverb-drenched lead guitar track, not a million miles from the country-tinged moments from the Warhols’ Thirteen Tales From Urban Bohemia or the haunting sounds peddled by Nick Cave. Pop fans should beware though, as despite the Warhols comparison this is not an album for those whose musical preferences rest solely with catchy hooks and hand claps. Even at its most radio-friendly with tenth track 'Swagger', it still isn’t exactly light listening: "How dare you stand corrected / No motives, intentions / A single thought to call your own", comes the accusatory slur from vocalist Aurelio Valle before he dares his audience, "so tell me something I don’t know". Indeed, much of Collisions’ intensity rests with the vocal delivery, as when the dulled, distorted guitar and roaming basslines weave in and out, sitting comfortably in the mix, Aurelio Valle’s vocals takes centre-stage and sets the mood in every case. His broken voice is frayed at the edges, its owner seemingly on the verge of an emotional breakdown at any given moment yet still capable of providing a texture to the songs that range from blues and country to Seattle grunge, from slurs and threats to delicate whispers.

The songs themselves complement their creators perfectly. Technically sound, simply arranged, atmospheric and occasionally psychedelic, Calla don’t just write musical warning shots bearing messages of violent frustration like 'Swagger' and 'It Dawned On Me' (where lines such as "Now I see, I believe / By the bruise that adorns your cheek" describe tales of slapped faces amongst other things), they are also capable of immense beauty. The haunting, atmospheric 'This Better Go As Planned' begins with a simple bassline before Valle opens his mouth. His voice a whisper, it’s one of only two tracks on the album which genuinely implores rather than menacingly challenges: "Are you swearing that if all this goes as planned, you’ll believe them?" comes the question, its delivery as fragile as the solitary high-pitched guitar notes audible amongst the backdrop of bass and percussion. It makes for the album’s highlight and here, along with similarly whispered and vulnerably delivered tracks such as 'Pulvarised' and 'Stumble', we are provided with a rare glimpse of Calla’s sensitive side.

The rest of the album is fairly consistent in its approach, but in terms of pace Collisions could do with some variation. Whilst the eleven tracks here do represent some of Calla’s best work it has just one pace, one feeling, which it rarely deviates from aside from the one comparatively uptempo number and an aimless but thankfully short throwaway instrumental known as 'Imbusteros'. So, somewhere around sixth track So Far, So What', Collisions begins to sound tired; the arrangements largely the same, the pace identical until 'Swagger' brings the tempo up for the ending sequence. Depending on your mood, the middle section of this album will be either one of the tenderest things you’ve ever heard, or it will be nothing at all, but that’s Collisions through and through; it’s not an album for all moods, it’s so intense that it cannot be taken lightly. It’s not upbeat and it’s not going to trouble the music-buying public for their attentions, but Collisions is deep, it’s dark and you could do worse than spare it 40 minutes of your life, even if it’s only once. Just don’t expect roses.