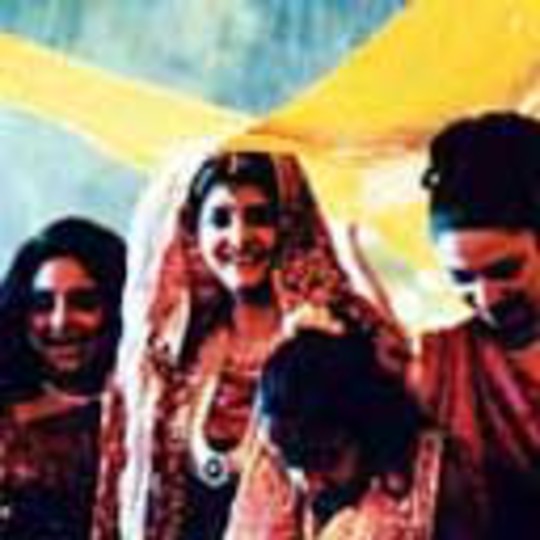 " _Sabrina (Sabrina Dhawan - Scriptwriter) and I wanted to make a film on modern Punjabi life as we know it. What better than making a film about a wedding because that is when the entire family comes together from all over the world? When family politics is at its height, romance in the air and illicit liaisons happen at night...... The film has five stories, each dealing with an aspect of love. There's blind love between the tentwala and the aayah (the real romance of the film); mature love between the parents of the bride; twisted misplaced love; teenage lust and wild sexual love, with affairs before marriage. So the film just uses the wedding as a context. It is actually all about love."_

A fantastic, feelgood, funny, intricate, romantic film, that, like a Robert Altman film, has a myriad of stories intertwined and brilliant spirited perfomances from the cast. It contained one of the most romantic moments I've seen in a film (Which of course I'm NOT going to reveal),traced the human weaknesses of a bride-to-be whose closeted skeletons are threatening to break out into song and yet simultaneously dealing with the sinister undertone of child abuse in a brilliant un-sensationalist way. The happy, but pressurised chaos of an extended family.... I loved the way that self-titled 'Event Organiser' PK Dubey (Vijay Raaz) goes through a Del Boy transition from wide boy wise guy to wide eyed pathos ridden romantic... and I loved * Naseeruddin Shah*'s character Lalit, the father trying to hold everything together...and I loved the way you were drawn in to the character of Ria(played by Shefali Shetty), the brides unmarried cousin... and the way it is subtly revealed why she has chosen to remain unmarried...... very beautiful performances.... but I shouldn't go on about them too much, because, from the bride and groom(Vasundhara Das and Parvin Dabas) to the coquettish teenage cousin Ayesha (played byNeha Dubey)... it's ALL good.

On freezing cold days like these, it's great to have a film that so warms the cockles of your heart, and does it in such a finely judged and intelligent way, without indulging in the usual cheesy sentimental quagmire.... Yep... Hollywood's arse get's another firm kick, this time from India!