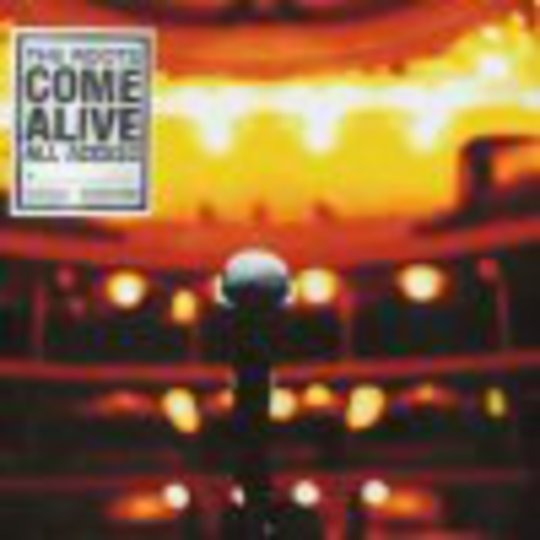 Ahmir '?uestlove' Thompson wouldn't know modesty if it shot him in the back with a twelve-gauge. In the sleeve notes, The Roots' turbo-powered, dynamite drummer takes a snide swipe at "all the groups who refuse to do shows with us ever again." This isn't because Philly's finest are potty-mouthed, gun-toting rap rascals with a So Solid-style reputation for trouble; it's because when they play live, The Roots' explosive brand of amp-crushing jazz-hop blows away their peers. Their wall-shaking, roof-rattling live-band sound makes the deck-heavy dependency of most rap acts sound anaemic & drab.

'The Roots Come Alive' – a stop-gap between studio outings 'Things Fall Apart' and 'Phrenology' – bottles all the funk-fuelled rap-rock of their records, adds all the full-throttle excitement & spontaneity of their live shows and a couple of studio tracks to boot. The crew's main rapper Black Thought is on incredible form here, tying his tongue-twisting ghetto poetry to the frantic beats of the curtains-up calling card 'The Next Movement,' and whipping a frenzied crowd into hysterics on the elongated 'Dynamite.' His brilliant dense lyrical flow is yet another way The Roots stand out from the mediocre pop-hop of the likes of Ja Rule and Cam'ron.

Elsewhere, there’s the off-kilter free-jazz of 'Essaywhuman?!!' and 'Love of my Life' – a sweet, low-key ode to hip-hop, featuring Common on a typically existential head-trip. But the real delight here is 'You Got Me.' Flitting from gentle love poem to frenzied noise and featuring the gale-force hollers of a then-unknown Jill Scott, it takes the Grammy-winning studio version and morphs it into something truly mind-blowing.

The odd mistake, and even the occasional over-long instrumental break only adds to the idea that this is a band pushing the very limits of what they are capable of in front of a breathless audience, and shows that their best is still yet to come. Ahmir Thompson probably thinks this is one of the finest rap records of all time. Strange thing is, he's probably right.