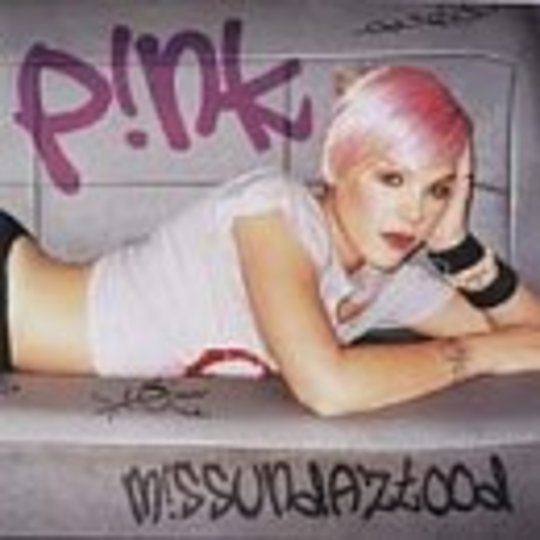 *P!nk *is only a couple of years older than Britney. Why do people take her more seriously? It’s cos she’s a serious artist, innit! This is quality RnB. It’s pop? It’s RnB? Ooooh, I just can’t decide.

I’m bouncing though. Or is that a nervous twitch? Ooooh, I _just _can’t decide. It must be good. Oh maaaaan! Where did those four minutes go? Hmph. That’s no good. This record is stealing bits of my life. *THIEF! *I’m whistling also. Or is that just me wheezing again? Ooooh, I just _can’t _decide. Damn fine singer.

I was alerted to P!nk’s world when my mate showed me the website. She had an undeniable allure: a bottle blonde with pink streaks…hmm. What’s going on with the eye make-up? Looking foxy, though. Is she trying to be a ‘rock chick [‘Get The Party Started’], or she on crack? Hmph. I just can’t decide. What the hell? She’s got black hair and sexy lingerie on and her sparky nips have been taped up [‘Just Like A Pill’]. Interesting. But why, oh why, is she so sad? Poor lulu.

She is most certainly a figure made for telly. She’s a bit cheeky and in turn you feel a bit cheeky. Don’t laugh. Not my fault! Without the graphic value of the videos these tunes should mean almost near to nothing but instead they stand up like a little meerkat. It’s not even just about the singles. The second finest non-bouncy song on here [‘18 Wheeler’] discusses the possibilities of throwing the bint through a window; running her over with an HGV and treating her like a slave. It’s damn good. A recurring theme is trouble at home [‘Don’t Let Me Get Me’ and ‘Family Portrait’] and the lyrics, thank mother of fuck, aren’t totally self-indulgent. They seem honest. Honesty isn’t the same as being a big fat crybaby.

Such melancholy shrouded in nothing. It is bare. You might see her as a kerrazy American chick who wears big, bad, *gold *jewellery with leather hats. It’s all a front. A bad choice of front, but hey, I’ll let her off.

This Is Not A Weapon EP