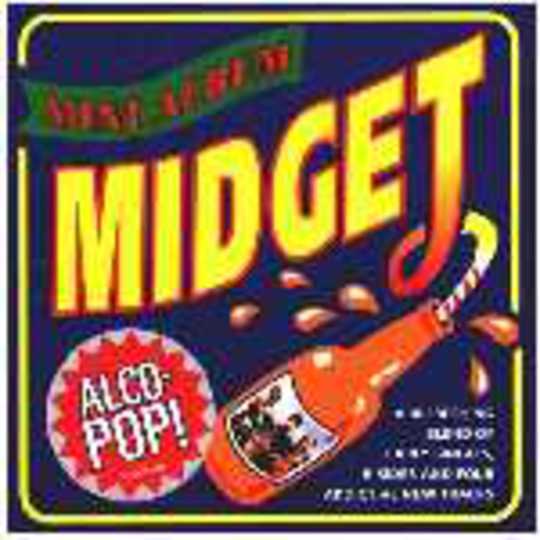 Think back to the mid 90's if you will. When the Power Rangers were everyones fave toy, the Sony Playstation was coming to dominance on the streets and Oasis, Pulp & Blur were kings of the airwaves.

However, elsewhere, there was another mini revolution picking up momentum. It was titled 'Sugar Metal' & the manifesto was simple... be happy and bounce!!!

Bands that got put in this genre were Symposium, Radish & Weezer to name just a few. For me though, one of the shining lights were Midget.

Their album 'Jukebox' was one of the most sadly over looked of the time. It was happy, it was party music, it was made for people to pogo and mosh and sweat and be as one... it was pop punk with an edge... they were our equivilant of Reel Big Fish go pop or the Symps with a slightly more punk sound.

Their mini album 'Alco-pop' epitemised everything about the band. It was a collection of singles, b-sides and a few new songs on a 9 track CD and showed everything Midget had got!

'Kylie & Jason', one of their first singles, said it all. 2 minutes of pure high octane bounce. Sounding like Ash's 'Lose Control' loaded on cherryade at a 7 year olds birthday party with a bouncy castle and springy guitar solos and keyboard samples towards the end, it really is what the band were put on earth for...to make us move.

'Why Have Cotton?' shows the bands slightly more rock edge while 'Camoflauge' has an almost sinister edge to it, but sounds like the kinda thing that Symposium woulda pulled out in their prime.

'The Pop Song' makes you bounce, wether you like it or not. The almost stabbing guitar and solos over the top make for a wonderful blend of pop rock.

'So Damn Creepy' is riffalicious, pop pumped up to 100 MPH and stuck on the motorway to speed it's way to our open ears so we can pogo the night away.

'Silly Little Rich Cow' made a Kerrang! cover CD once, which suprised me seeing as it really is a distance from their other stuff musically.

Clocking in at over 4 minutes, it is almost double the length of their other songs. However, it is also one of their best. Showing that they do have a great musical edge and thoughtful lyrics as well as full out adrenaline. Lyrics such as 'I've Got The Deadly Cyanide, Contemplating Suicide, What're You Gonna Do Now, You Silly Little Rich Cow' all sung over an almost US rock guitar solo with xylophones and a brass section... it is almost too much to take in.

'Wendyhouse' is under a minute long, and can compete for great short song status along with 'Monosyllabic Girl' by NOFX.

'Welcome Home Jellybean', & 'Parting Shot' follow on along with everything else, keeping you jiving along to their delicious meld of loud guitars and subtle, almost dream-esque breaks.

This band, long forgotten by the music public, never got the recognition they deserved. In a world infested by Limp Bizkit, Papa Roach & Linkin Park & the Prozac and razorblades society of today, this kinda thing could be just what they need to see it is not all doom and gloom. There is sunshine, there is happy days...there is Midget!