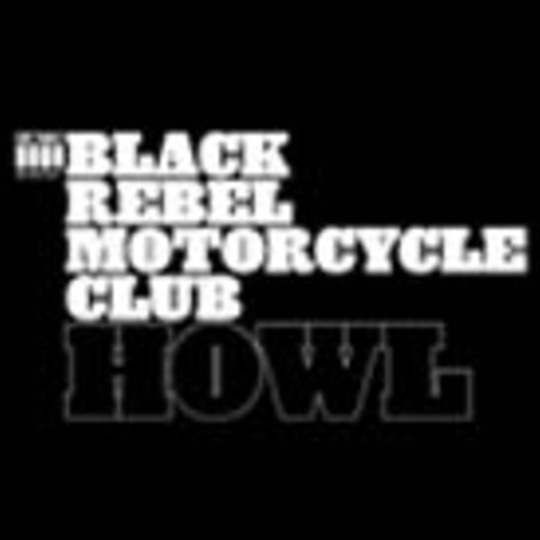 "Time won’t save our souls" - 'Shuffle Your Feet'

And so the monochrome messrs of shadowy rock 'n’ roll return with a brand new label and a brand new album. Can Black Rebel Motorcycle Club wipe away the big woopsie that was Take Them On, On Your Own and recapture the edge of their debut? What will they do? Where will they turn? Will they ever smile? All will be revealed…

If BRMC read their own press there is one band name that, if mentioned, must cause the trio to slam their heads into their hands, sigh, get up and leave the room in silence. Thankfully, Jesus and The Mary Chain seem to have left their field of vision, leaving a dusty, open plain of gospel blues and twanging good-time Americana. Howl tears up the pages, discards what has come before, and shows that a combination of inter-band brawling, record label indifference and an inflatable man’s part really works_ for this band. BRMC’s third album is a triumph.

Returning to their native San Francisco, Peter Hayes and Robert Turner have shed their well-worn garage band tunes, instead opting to sit down with a couple of acoustics and turn their heads to the light. The celebratory jam session at the core of opening track ‘Shuffle Your Feet’ sets the tone for a record that brushes through beatnik heraldry (‘Howl’), snakey blues, (‘Ain’t No Easy Way’) barrelhouse-piano balladry (Promise) and epic drone-rock (The Line). What emerges most startling from these tracks is the sheer quality of the vocals. Both Hayes and Turner – now Robert Levon Been – grapple with coursing blues melodies, tender laments and Spiritualized (yes, they’re still in there) influenced ambience with a new-found strength – only falling short once during album filler ‘Still Suspicion Holds You Tight’. Yet this is but a minor complaint on a record made by a band who by all accounts were certified dead some time ago.

BRMC have been resurrected and re-tuned. Howl is a clear indication that it’s time for us to start reaping the rewards. If they aren’t smiling yet, they soon will be.