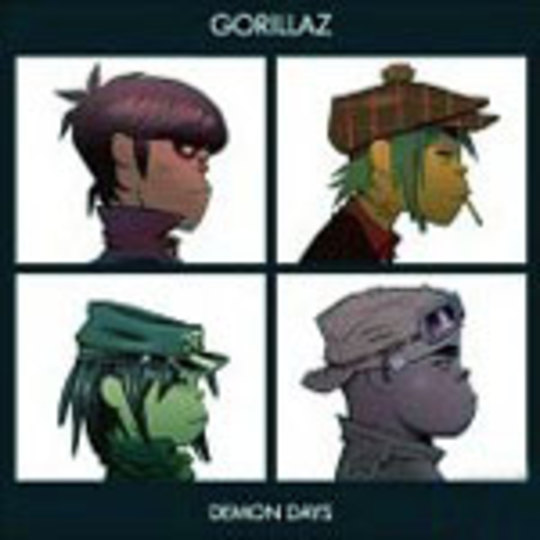 Gorillaz’ 2001 debut was a, largely, inventive and playful affair coupled with a Jamie Hewlett-created cartoon façade which allowed Damon Albarn to manufacture a twisted variation of hip hop without making himself look like an arse on Top Of The Pops.

Albarn is still making an arse of himself on TOTP but he’s a smart one: ‘Demon Days’, Gorillaz somophore album (complete with 'Let It Be' style cover - mmm could that be an omen?), utilises an array of talent from the sublime - Danger Mouse, De La Soul, Roots Manuva - to the ridiculous - Shaun Ryder. Joining the bill are Neneh Cherry, Martina Topley Bird, and the San Fernandez Youth Chorus (2003-2004 season, natch) who lend 'Dirty Harry' a strangely sinister edge. Simon Tong, former guitarist with The Verve, is an inspired choice, effortlessly running through Coxon-esque riffing ('O Green World', 'White Light'), porno style wah wah ('Every Planet We Reach Is Dead'), and Balearic house guitar ('Feel Good Inc').

Perhaps the biggest contribution comes from the London Gospel Community Choir who grace the Beach Boys-tinged 'Don't Get Lost In Heaven', and the swirling sonics of 'Demon Days'. Their sweet vocals have often been the saving grace of many a third rate indie band (and indeed Albarn's 'other band', Blur) but here their contribution is at the forefront of both songs lending this sublime closing couplet a suitably soulful edge.

It's needed, too, because Albarn is, let's face it,not the greatest of singers, and Shaun Ryder sounds as tired as he looks on the directionless 'Dare'. Pharcyde's Bootie Brown could be rapping from a shopping list because he's virtually indecipherable here, and as for Dennis Hopper's starring role on 'Fire Coming Out Of The Monkey's Head', well, let's just say Timothy Leary would be proud.

So many names, so many influences: perhaps unsurprisingly 'Demon Days' is a dizzying, disorientating and sometimes directionless album. It does retain an inventiveness but doesn't have anything as immediate as, say, 'Clint Eastwood'. It's a record that requires patient investigation so will be richly rewarding for some but hard work for others.