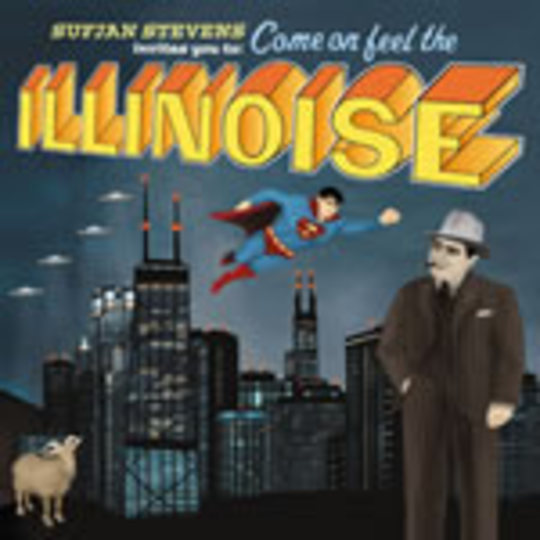 Illinois is the prairie state. The twenty-first of fifty in the North-west territory, Wisconsin to the north and Kentucky to the south. Across Lake Michigan lies the birthplace of Sufjan Stevens, a man treading a thin line between bravery and mental illness. His 50 States project aims to document every American state before either he loses his mind or we lose our interest. 'Illinois' (the second in the series) makes it abundantly clear that neither of these things are particularly likely. I'm not going to be coy about this - I am about to gush unashamedly about this record. Gush in a justified manner. It's breathtakingly beautiful, adventurous and deserves no less.

'Illinois' is composed of 22 tracks rich with history, heartbreak, geography, culture, romance, murder, intrigue and politics. While 'Greetings From Michigan, The Great Lake State' (Michigan being Stevens' home state) was an immensely personal and reflective collection of songs, 'Illinois' is told through different eyes. Where Stevens was a ambassador for Michigan, to Illinois he is a reverent actor re-telling history and embellishing it with drama and emotion, for example, a short coda honours the wife of Abraham Lincoln ('A Short Reprise For Mary Todd, Who Went Insane, But For Very Good Reasons'). The surging waves of plaintive piano and flute that open 'Concerning the UFO Sighting Near Highland, IL' lead onto what feels like a true opening - the thunderous 'The Black Hawk War...', laden with bombastic percussion, brass and vast choral arrangements. Then with almost no breathing space comes the two-part 'Come On, Feel The Illinoise!', the first section ('The World's Columbian Exposition') is a bouncing piano-led bustle that evokes history and pioneer social development ('Chicago/The new age/But would what Frank Lloyd Wright say?'), the second a series of strutting horn stabs and shuffling drums.

Musically, the arrangements are staggering - while there are similar sounds here to those found on 'Greetings From Michigan...', there are over 30 instruments and musicians at work here and never do they feel cluttered or unnecessary. Dubbed the 'Illinoisemakers' (formerly the 'Michigan Militia'), the core performers bring together heavenly vocals (heard best on a vocal round that ends 'Decatur, or Round Of Applause For Your Step Mother!'), regal horns, lavish strings and some superbly artful drumming provided by Ester Drang's James McAlister. For reference points, the aforementioned 'Decatur...' blends Iron & Wine's wistful folk with playful lyrics; 'The Man Of Metropolis Steals Our Hearts' recalls the more dissonant side of recent Wilco and, rather oddly, I can't escape the fact that the organ-led interlude 'Prarie Fire That Wanders About' could almost be avant-garde Scooby Doo incidental music. No, really. There are about six of these minor asides amongst the 22 tracks, but instead of appearing gimmicky, they mostly add personality of the record as a whole. 'Let's Hear That String Part Again, Because I Don't Think They Heard It All The Way Out In Bushnell' steals the strings from the sly groove of 'They Are Night Zombies!! They Are Neighbors!! They Have Come Back From The Dead! Ahhhhh!' (itself, an absolute high point) while 'Riffs And Variations on a Single Note for Jelly Roll, Earl Hines, Louis Armstrong, Baby Dodds, and the King of Swing, to Name a Few' pays a brief horn-lade tribute to Illinois' jazz luminaries. In this respect, 'Illinois' less like an album, but a seemless orchestrated movement. This idea only wavers as the album nears its finale, an instrumental piece that recalls the Philip Glass inspired moments of 'Michigan'. The dirge-like 'The Seer's Tower' almost threatens to kill the pace and whilst the joyous _'The Tallest Man, The Broadest Shoulders..' sports this year's finest use of handclaps, it just manages to outstay it's welcome.

Beyond all the miniature deviations though, there are stunning songs at the core of this record. 'Jacksonville' blends piano, banjo, stately horns and strings into tumbledown folk with the Illinoisemakers gleefully singing 'Andrew Jackson/All I'm asking/Show us the wheel and give us the wine!'. The breakdown of 'They Are Night Zombies..' houses possibly Sufjan's most beautiful vocal work, but perhaps the most affecting is 'John Wayne Gacy Jr'. Comparatively bare and lyrically haunting, it documents the life of its namesake, the revered 'Clown killer'. If you aren't chilled by the stark emotion evident in Stevens' breaking falsetto ('Twenty-seven people/Even more, they were boys/With their cars/Summer jobs/Oh my God, are you one of them?'), then consider yourself devoid of a soul.

Though the unitiated could dismiss this as gimmicky, rose-tinted romanticism or tired Americana, repeated listens reveal what makes _'Illinois' so special. There's a conviction and a reverence that fluidly runs through these songs - there are so many minute nuances to pick through and convince you that this is not a project taken on lightly. This is a faithful and staggering tribute to a state executed with passion and originality, and it's one of the finest records you'll hear this year.

All Of Our Hands