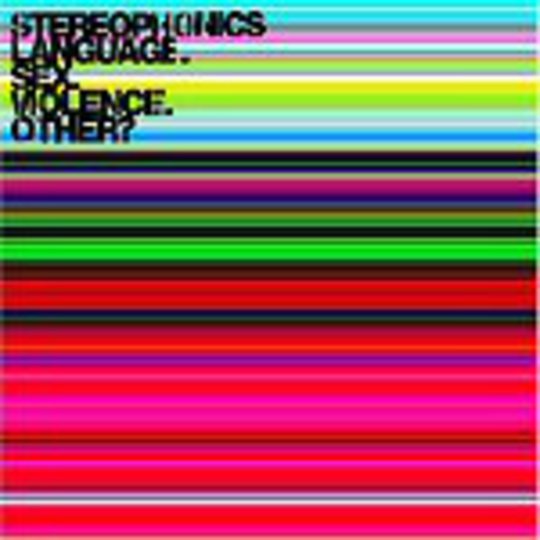 In the accompanying press release, Richard Jones claims "We put the spliff away for this one" with Kelly Jones agreeing, adding "This one was recorded with a lot more energy."

'This one' is Stereophonics' fifth album 'Language. Sex. Violence. Other?' and the bushy-eyebrowed frontman is right, it certainly is a lot more energetic but a change in direction? Well, it's hard to say if the heavily Pro Tooled production counts as a change. This kind of manouvere could be seen as, especially given the lukewarm critical reception afforded 'You Gotta Go There To Come Back', an attempt by the 'phonics to claw their way into the 21st century.

Stereophonics have in effect 'done a U2', packing in the arena-filling songs but with added AOR. Elements of rock dinosaurs such as ELO, **Chicago and Fleetwood Mac all crop up over the course of 11 songs. As for single 'Dakota', well, it does have an uncanny resemblance to Bono & co. but the less said about the fact that 'Brother' sounds like Kula Shaker, the better.

As for that title, well, it comes from the classification code used on the back of DVDs (stop yawning!). Kelly Jones wanted to know if it meant everything could be broken down into those four categories or if there was 'something more'. That question could equally be applied to 'Language...'. Sure, there are radio-friendly, stadium rock moments aplenty. Yet, the chugging, plodding guitar riffs remain, new drummer Javier Weyler adds little value, and Jones is still straining away like Liam Gallagher having a dump. All this anchors 'Language...' firmly in the now familiar 'Phonics crowd pleasing pub rock territory. It will no doubt sell by the van load but frankly, who cares?

So, there's no sex, no violence, only a little (bad) language (I counted at least one 'fuck' in 'Superman') but something 'other'? Hardly. Maybe Sterephonics should get back on the gear - or something harder - next time.

The Black Velvets at The Joiners, Southampton, Mon 21 Feb