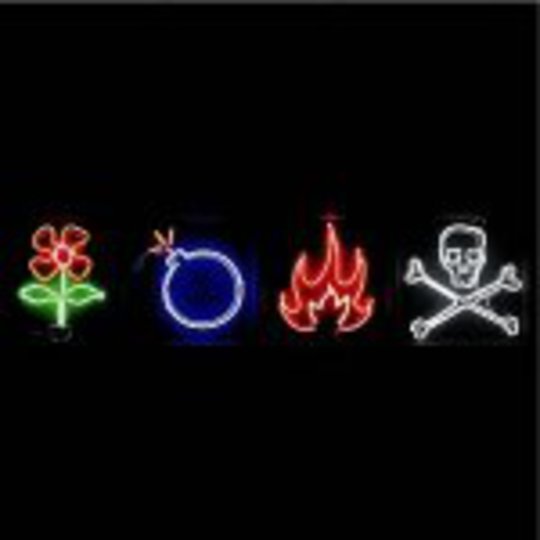 Kill the last romantic? If only. I wouldn’t advise getting this for your loved-one on Valentine’s Day.

Poor Easyworld still haven’t got the hang of this albums lark, but at least 2002’s ‘This Is Where I Stand’ had some great guitar pop moments (most notably ‘Bleach’). The endless tours saw them pick up a small yet loyal following. ‘Junkies and Whores’ was the song often dedicated to them (charming). The eyeliner-clad King Adora fans (note: wearing eyeliner does not suddenly make you ‘glam’) found a band younger and prettier to devote themselves to. But is it the same fans who put newest single ‘Til The Day’ in the Top 30?

To a great extent, it’s hard to see how it is, but if it be true, there’s going to be a damn lot of letdowns when they hear the rest of the album. In a nutshell, ‘Kill the Last Romantic’ is a steaming pile of donkey droppings. It’s as much of a departure to their last album as The Electric Soft Parade’s equally awful effort last year was to theirs. Change is good, unless the change is, er, well, bad.

Let’s get this straight: I was a fan. I really, honestly, fucking adored Easyworld. I don’t want Easyworld to turn into the sort of band even Radio 2 would reject for being “a bit too easy listening.” Well, that’s only what they’ve just gone and bloody done. And believe me, I have tried listening to this over and over, over a number of months since it unexpectedly bypassed the PR folks and slipped through the DiS letterbox, waiting for somebody to notice it and give it a good home.

Where to begin? God, I haven’t the energy – that’s fine, as it seems Easyworld don’t either. ‘A Lot of Miles From Home’, ‘Saddest Song’ … looks like somebody’s been upset, and that means everyone else will have to suffer too. Come on Dav, give it some welly! Out of 12 tracks, the only one with a bit of bite is ‘When You Come Back, I Won’t Be Here’; a no-bullshit, timeless 2.5-minute pop song which even has a little key change at the end. Ah, bless.

Overall, less romance, more melancholic whinging from a band who sound like they can't be arsed anymore.