War All The Time 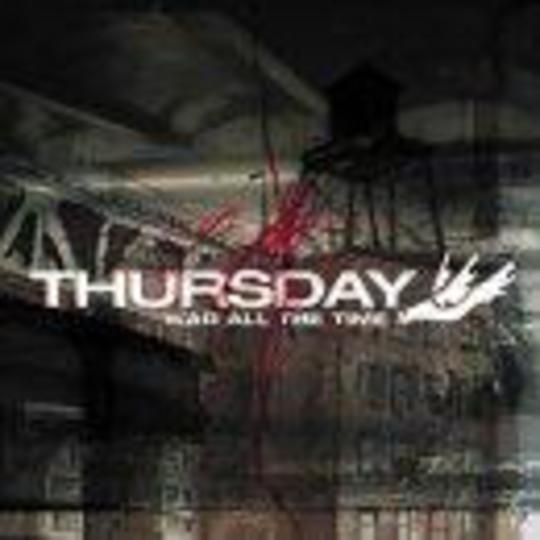 When Thursday released their previous long-player ‘Full Collapse’ on US independent Victory Records in 2001, it was instantly hailed an emo classic. And as word spread of the record and the band’s intense and fan-welcoming live shows, their popularity only continued to grow further. In the UK, even without an official release for ‘Full Collapse’ or earlier release ‘Waiting’, they sold out shows in London and, perhaps most tellingly, when supporting the now defunct The Movielife on their 2001 tour, the audience thinned out considerably at the end of their set each night.

‘War All The Time’, marks Thursday’s major label debut for Island. In defence of the band against cries of ‘sellout!’, Victory Records are hardly the straightest of indie labels; infamous for a clause in their contracts stating that if a band wishes to leave Victory they cannot sign to another independent. This is shitty and this is true.

Glad we’ve got that settled then.

But enough of the background information, because I’m not sure Thursday really deserve a lot more of it. While ‘Full Collapse’ was awash with feeling and, more importantly, memorable songs, ‘War All The Time’ falls flat on its face through trying too hard. The melodies are haphazard and overtly awkward and the instrumentation, while competent and intricate, is nothing you couldn’t hear on the previous record.

After the electrifyingly brilliant track 'Jet Black New Year' from the 'Five Stories Falling' EP (the band's final Victory release), I had high hopes for the new album. Upon buying it however, I’ve been left sorely disappointed by a disjointed and generally underwhelming collection of songs and almost-songs. Sure, it’s not all bad; tracks such as ‘Division St.’, ‘Signals In The Air’ and recent single ‘For The Workforce, Drowning’ are all fine examples of great rock music. The title track isn’t exactly terrible either. But this is less than half of the album and it doesn’t compensate for the spacious dirge of filler elsewhere.

Frontman Geoff Rickly recently described ‘War All The Time’ as "an album with no hooks". Well, at least he’s honest.