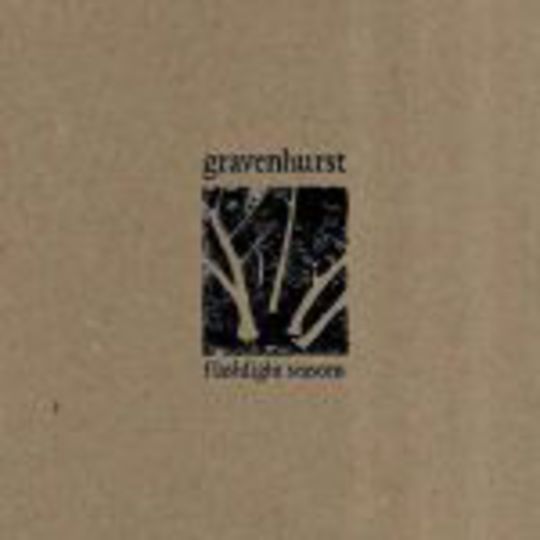 I'm savouring Nick Talbot's second album under the moniker Gravenhurst, 'Flashlight Seasons' from Bristol's Sink And Stove Records. These melancholic, mid-paced pop recordings could easily see Talbot lost in an overcrowded field of polite songwriters - or worse, damned as an also-ran by the numbskulls who listen to thirty seconds per track. But that would be an awful shame because these are memorable, twisty, premier division songs. The genre is the tripwire.

'Flashlight Seasons' sits somewhere between the British schmindie of Richard Hawley or, if I'm being mean, Trembling Blue Stars and American moaners like Rufus Wainwright. But Talbot's material outguns those names. Meanwhile, the budget production makes it intimate and simple. I guess they could've hidden the cheapness in mushy reverb and cried 'lo-fi!' but instead we get beautifully-played arrangements and a deft economy of instrumentation. Never use a whole drumkit when the kick-drum and some shakers will suffice. The result is a runaway winner.

Talbot's archetypal neo-falsetto post-Buckley vocal is also rich enough to carry a much bigger production, if somebody sees fit to throw some cash Gravenhurst's way. He's a pretty guy too and if sensitive gentleman tunesmithery were to become fashionable again, he'd be a prime contender for stardom. I was - perhaps incongruously - reminded of Nineties suitwearers like Delicatessen, rather than the Simon And Garfunkel mistakenly mentioned in the press release. By the way, I had problems with the press release and I'm very glad I listened to the record before reading it. Their claims were impossible to match (My Bloody Valentine, music concrete and Velvet Underground!), while they patronised me by telling me I wouldn't know this was a home recording, when it's patently obvious.

But that scarcely matters. I'll be looking out for Gravenhurst in the future - as well as digging out his own-label debut 'Internal Travels'. And if you're up for risking some artful pop on spec, I'd recommend Nick Talbot.