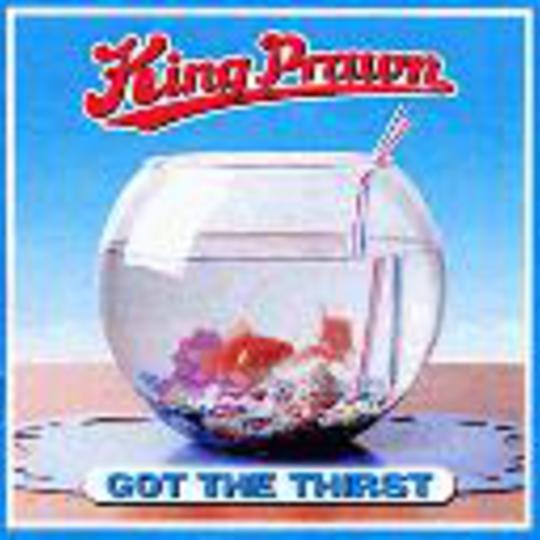 King Prawn, in my opinion, have always been one of the most underrated bands in the UK, if not in the mainstream and fanzine press, then by music fans, regardless of musical preference. As one of the most hardest working and hardest touring bands in recent years King Prawn seem to be stuck permanently in the same toilet circuit that has seen off similarly talented acts; of which many reluctantly turn to more commercially acceptable forms rather than playing what they love most.

But not King Prawn. With music this infectious and uplifting they’re not gonna let anything stop them having a laugh and playing what they and many others enjoy so much. That is, creating the most up-beat, danceable and ultimately hard-hitting music possible. Which, since their debut ’95 album ‘First Offence’, is exactly what they’ve done, not compromising their rigorous touring schedule for no one.

‘Got The Thirst’ is KP’s fourth album and most certainly does quench the thirst accrued over the three year wait since 2000’s ‘Surrender To The Blender’ album. Babar’s wonderfully distinctive fretless bass tip-toeing underlines the album with his usual cheeky ska/dub swagger whilst songs like ‘Bring Down The House’ demonstrate their punk rock tendencies, rupturing the ska skin and unleashing the punk spirit in an infectious, raging chorus.

But while much of King Prawn’s material follows this structure they always seem willing to experiment with cool-sounding production techniques, whether it’s a little bit of funk in ‘Gather Round’, some tinkling horror-film style pianos in ‘Hell Below’ with additional cut-n-pasting of drum loops and vocal arrangements, and even some Gaelic panpipes opening ‘Viva Devi’. Quite simply, KP are a band with far too much creativity to limit themselves to a simple ska-punk template and therefore emerge as the true kings of the UK scene.

Just listen to ‘The Dominant View’s grimy, rumbling bass distortion as it scrapes crudely against a drum ’n’ bass backdrop and name one P-Rock ska-punk band that can get you grooving in remotely the same way. No one even comes close.

My only criticism is the track ‘Smoke Some Shit’, whereby a group of young girls provide the backing vocals to the chorus of, “smoke some shit, we wanna smoke some shit, marajuana’s the real heal, we gotta smoke some shit”, which I find kinda worrying when I think of the gormless, red-eyed, couch potatoes it's turned some of my friends into.

But, despite this, ‘Got The Thirst’ is still a record that bursts with an enriched, explosive quality that, regardless of what genre descriptions get stringed together in an attempt to describe it, is pure feel good music.

Today Is The Day, Charger at Camden Underworld, Camden Town, Thu 08 May