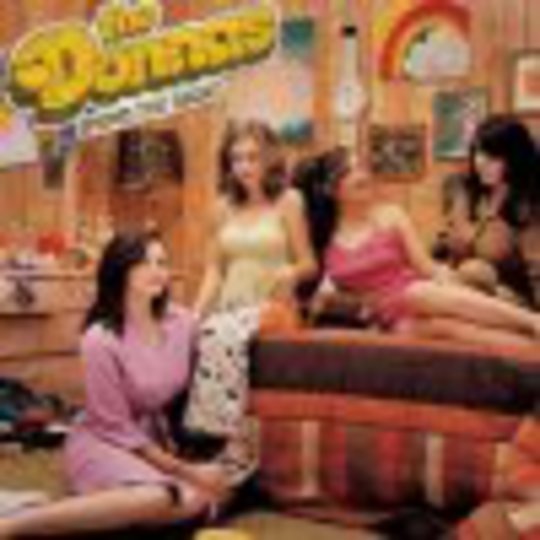 …so like yeah, The Donna’s wanna spend the night. I mean like everyone totally wants to spend the night with me, but that’s not what this is about. They’ve named their latest offering to chicks with guitars rawk, Spend the Night. The cover is all sleep over chic, with some dude on the back all passed out, with lipstick on his face. Cuuuute!!

I never used to like these girls. They seemed REALLY annoying, but if I really think about it I may have been confusing them with Kenickie. I won’t do that again. Cos they really were annoying. And shite. Anyways, the (four-non) Donna’s blast us with 13 songs of girl angst covered in sugar sugar candy pop. What else did we expect? Hmm, not much else and that’s a good thing.

Something’s gone wrong in my chemistry and all I wanna do is dance around my bedroom air guitar in one hand and hairbrush in the other, pretending like I’m part of some loud mouth sexy as fuck band, making out with boys and spending my days covering up hickies so mom and dad won’t see. I wanna move like some Sandra Dee after her cherry was pipped.

*drops cigarette on floor and stubs it out with hot pink sandals…burning hole in carpet*Fuck!

As I’m still mourning the brutal kidnapping of the gorgeous goddesses Veruca Salt (damn you Courtney!) I need something to cheer me up LIKE NOW. And with three days to go until pmt melt down, this record is the band aid of choice.

Spend the Night, with its fast paced guitar rants about boys and their bad girlfriends, skinny boys (ick) and bad boys trying to get girls drunk (try roofies, much faster and the compliancy is probably worth the conviction) will fill my rock chick needs and save me from whinny boy rock, that is until mom and dad ground me for giving head to the gardener.

*picks up fake ID and climbs out of window*

(Stacey does not condone the use of illegal mood altering drugs to victimise women and their sexuality. She generally needs little coercion and will DO literally anything to get attention. Except dogs-ED)