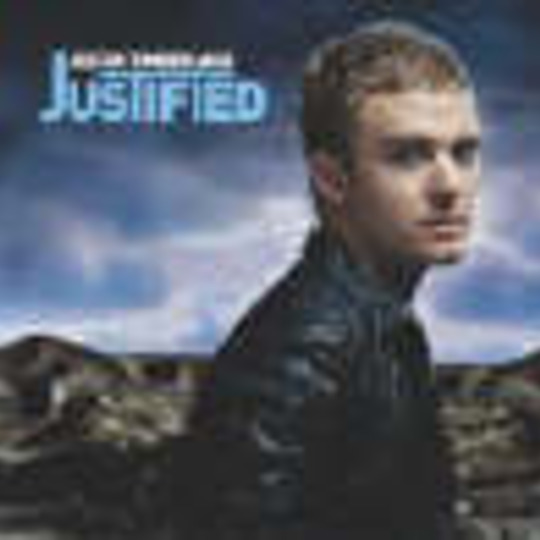 During one of the many radio interviews he took part in to promote this album and its accompanying single, ‘Like I Love You’, Justin Timberlake admitted to performing oral sex on his ex-girlfriend, Britney (no surname needed) during their supposedly true-love-waits style relationship.

Now, with any luck you should now have a mental image of Justin snuffling his face about in Britney’s crotch like a starved pig at a feeding trough. I would hope so anyway, and, more to the point, so would Justin, and probably even Britney. Because the aim of such a confession is sure to help destroy the pairs squeaky-clean image of them as two apple-pie huggin’ virginals, as no doubt the marketing demograph shows that at this point in their career they should really consider trying to reach out to an older and more ‘street-credible’ audience.

So, out with the clean-cut, in with the rough stuff, and Timbo’s new solo ‘project’ is an antiseptically ‘hipper’ and ‘mature’ album that will (hopefully) prove he can make it on his own, away from his day-job in bland boyband, *NSYNC. And it’s called ‘Listen Without Prejudice’.

Er, except it would be if only someone else hadn’t already used that title for similar purposes. No, it’s called ‘Bad’. What? No that’s not it, it‘s called ‘Justified’, yeah, that’s it. Yeah. Because he’s now been ‘justified’ as an artiste by making a proper grown-ups album, see? So stop having a FUCKING GO, alright?

And you know what? More or less it’s a thumping great success.

Most music reviews not written by vinyl-sniffing tossers wouldn’t normally mention the album’s producer without good reason. But here the reason isn’t so much as good as unavoidable, in fact I would bet that every review of any note, outside of Smash Hits! territory, has given generous mention to ‘Justified’s producers. Reason being this album is likely to attract attention due only to the fact that it has received the Midas touch of not only Timbaland but also The Neptunes. I know that The Neps, due to the high strike rate of hits that their characteristic production sound has helped create, are already building a devoted following themselves - and in a similar way that people track down Phil Spector or Joe Meek produced singles and albums, regardless of who the artist is, I don’t doubt that this’ll also sell to those who wouldn’t necessarily go near a Justin Timberlake album but are Neptunes completists, and see this primarily as a Neptunes album (or, of course, Timbaland - but be warned Timba-fans, in the battle of the producers, The Neps OWN this beeyatch, yo).

And the rumours are true - well, they aren’t rumours - Pharrell Williams, Chad Hugo and Timbaland have been listening to prime era Michael Jackson and Stevie Wonder for inspiration, the best results of this endeavour are ‘Rock Your Body’ and ‘(And She Said) Take Me Now’, both of which sound like ‘Off The Wall’ off cuts, and the utterly sublime, slinky n’ smooth ‘Nothin’ Else’ which could be a lost Stevie Wonder classic.

Overall they have crafted what is a thoroughly modern, stylish and super-smooth sound, all long drinks in late-summer afternoons and soft ocean breezes. And sonically speaking Timbaland’s stuff comes across as all a bit too fussy sounding compared to the Neps’ calm economy. Indeed, The Neptunes’ less-is-more approach results in some striking sounding tracks where, not only does there not seem to be anything much of an actual tune, there isn’t actually much in the way of any music here either, just percussion, sometimes using arcane instruments, building up an incessant chattering rhythm, and lots of space into which they drop flourishes of strings or Spanish guitar strums or, in the case of ‘Last Night’, the tune to Van McCoy’s early disco hit, ‘The Hustle’ played on an xylophone.

This could’ve ended up, as many expected that it might, with Timberlake being the producers’ pop puppet; making him dance to their tune and having him as acting merely as a shop-window dummy for an album that that is a showcase for, and is all about, them.

Luckily however, and to his eternal credit, Justin, meets their challenge and proves that he has a talent that elevates him above being a mere boyband gonk. He perfects his Jacko falsetto yelp and hiccuping and largely adopts the pre-wacko vocals of the ‘Show You The Way To Go’ era Jackson, while elsewhere he also manages to just about match Stevie Wonder’s caramel croon without sounding like Jay Kay.

I’m not entirely surprised, *NSYNC completely passed me by until I heard their single, ‘Girlfriend’, a fantastic pop song which had an incredible vocal performance from Timberlake which reminded me of Scritti Politti‘s similarly nectar-voiced singer, Green, and I can’t think of a much higher compliment than that (I even thought it would be a good idea for them to cover Scritti‘s ‘The ‘Sweetest Girl’’, but I fear they would consider the lyrics a bit too ‘complex’ for *NSYNC’s audience. Cah).

For what it’s worth, lyrically ‘Justified’ has a fair share of the expected ‘girl done gone left me’ cry-baby ballads, but these are overshadowed by the more deeply funky tracks which have Timbo comin’ on like a right old saucy beggar; no sooner has he wiped Britney’s girl-honey from his chin than he’s off on the prowl round the nightclubs, lasciviously checkin’ out the señoritas, “I bin watchin’ you and I like the way you move/so go ‘head girl, jus’ do/that ass-shakin’ thing you do” and “I can tell you want to more than just dance with me”, and “get real wet, if you know what I mean”, oo-er! At one point he even promises [the listener]: “bet I have you nekkid by the end of this song”, steady on Timbo! (Brr - it‘s chilly in here). (Well, that‘s my excuse).

But although Timberlake proves his worth, it is perhaps telling that the two real stinkers on the album are the only two which don’t involve either the Neptunes or Timbaland. ‘Never Again’ and ‘Still On My Brain’ are both soppy, boiled to mush ballads whose inclusion was presumably intended for the *NSYNC fans still craving the none-threatening poster boy of old simpering his heart out. ‘Never Again‘ is particularly wretched, over thickly clotted piano and syrupy strings Justin’s voice trembles and cracks as he sings of his lost love (you know who), “all you had to do was apologise and mean it” he whimpers. Frankly you’d have to have a heart of stone not to laugh out loud at Timbo’s emotional breakdown.

He does it to himself, he does, and that’s what really hurts. He can’t fully mask his insincerity or his smugness or his vaunting self belief or his cold-eyed ambition with any great success which 1) therefore makes him the US’s Robbie Williams (bad news for EMI then), and 2) stops the casual listener from becoming engaged in him or the album.

Nevertheless, his faults - which may only exist in my ears - don’t stop ‘Justified’ from being what it is: great pop. Too stylishly sticky for some, maybe, but it shows he’s come along way since, along with Britney and Christina Aguilerra, he was a Disney Club mousketeer, and as a first step on the notoriously pitfall strewn path away from boyband-dom, this is a remarkably assured move. “If you give me that chance to be a man” he pleads. Chance granted, Timbo, just don’t blow it (no oral-sex related pun intended, honest).