The End Of The Way It's Always Been 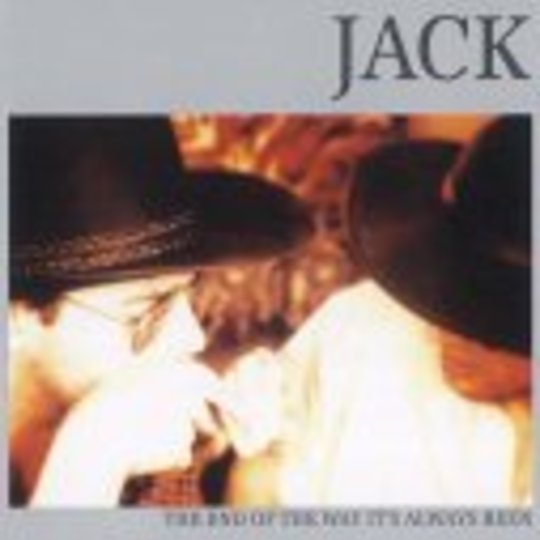 Well, anyway, the thing is, Jack are back.

Along with ‘Fox Base Alpha‘, ‘From The Heart of Town’ and ‘Mornington Crescent‘, Jack’s albums, ‘Pioneer Soundtracks‘ and ‘The Jazz Age‘, were two of the great London / city albums that sprang up during the nineties. Awash with red wine and romantic melancholy, they stumbled down empty, north London side streets in the dead of night singing their bruised and heavy hearts out.

Both were string-laden, orchestral pop mini-masterpieces which came wearing their literary and cinematic references unashamedly on their (record) sleeves.

A third album was started then scrapped and the band parted ways with their record label. After a fairly lengthy hiatus, Jack signed to French label Les Disques Du Crepuscle and their third album has just been released in the UK.

Oh yeah, Jack’s back. Pretentious, wordy, melodramatic Jack are back

(By the by, the word pretentious has always been a curious form of insult where art is concerned, especially music which is, surely, pretension’s natural home. From Mozart to Morrissey; from Beatles to Bowie to Blur, pretence and pretending and preening and general pratting about have all been an integral part of their artistic growth. I mean, pretension usually just means that, at the very least, the artist is actually trying something. Overreaching, overdoing , overwhelming, overweening, overshooting, overkilling, over blowing maybe, but it’s something. And something is always better than nothing. If envelopes have to be pushed (and they do), and boundaries have to be crossed (and they do) then we have to expect musical acts to do more than plod out samey, ‘it’s-trad-dad’ albums. We’ve seen what a landscape dominated by prosaic, no frills, no spills music looked like during the upsurge of blokey, Weller-worshipping, Britlad-rock in the 90s, and I say: not that way. By the by.)

Though still driven by a mixture of Walker-like drama and a Dexy’s-esque anguish, Jack return changed men. Old ideals but new ideas.

The changes are clearly marked out on the first track, ’The End Of The Way It’s Always Been’, which parallels ‘... Of Lights‘, the opening, equally slow-burning track of their debut album. The change is, well, electronics mainly. Samples, tapes, synths, drum programmes and all-sorts have been embedded into the sound to create a dynamic asperity. In the 90s there was a brief vogue of tacking on strings to dull indie tunes in an attempt to somehow create an instant ’sophistication’ and supposed emotive depth. But unlike Shed Seven et al, Jack never used a hired string section for superficial effect, strings were, instead, an essential part of their musical make-up. They were a string led soul band like their heroes before them.

The samples and so on, on their new record, are used to the same integral effect. The first couple of tracks, at least, fuzz and crackle as if just struck by lightening; glowing with an energy that is primal blue. While ‘... Of Lights‘ was filled with a nervous, pre-millennial dread (ha! remember that? Oh we can smile about it now, but at the time it was terrible), ‘... Always Been‘ shakes with - the equally du jour - disgust of broken promises and a sleeves-pulled-up determination that starts with someone singing the la-la-la part of ‘My Cherie Amour’ then fizzes and burns for a quite a while before breaking into a surprising - well, I was surprised - cascade of punishing industrial drum beats.

Second track then opens with what I first thought - with even greater surprise - was Henry Rollins doing a voice over (it isn’t Hank, Lucifer be praised, it’s ‘actor’/playwright Dan Fante). “Hush my child, by morning it will be over. That last century is just smoke beyond my shoulder“ he intones purposefully over a slinky, dancey, chika-chika beat. I’m thinking, ‘have they given me the right CD? This is_ Jack ain’t it?’ It is. I know it’s them when I hear “Undress for me in a room by the docks overlooking Nasa_“. Ahh, they’re back alright.

‘Emperor of New London‘ continues and contains arresting lyrics. Regard: “The revolution happened, we didn’t even stir in our sleep“

No sooner have I chiselled that onto my gravestone, than another pearl appears.

“You know why they call me ugly? It’s ‘cos I run _faster than beauty_“

That one I’m having spray painted onto the walls of my tomb.

Jack’s back. There are still plenty of ‘Jazz Age’ type string-drenched ballads on here. Anthony Reynolds - claret for blood, vocals burred by cognac and kissing, moved by movies, driven by dreams, Cocteau, Kerouac and Peckinpah moving like ghosts through his writings - is still tossing out bon mots like “I Loved you like I Love the view from a winter train“ like confetti, scattered like the petals of a kicked flower-head (and I Love how the word Love is capitalised in the lyrics).

Then there’s a one-off track like ‘Disco-Cafe-Society‘ which sounds like Fosca or Denim or someone attempting to do electroclash and, against the odds, against all the sods, succeeding. ‘With You I’m Nothing‘ is a drive at breakneck speed down mountain roads, vision blurred by tears; ‘Sleepin’ Makes Me Thirsty‘ is a lonely-hours memory of teenage snogging on fairground Waltzers, and, with the nine tracks mostly exceeding five minutes, the songs luxuriate in their length without out-staying their welcome, without becoming stodgy prog chug-a-lugs.

Jack are back with their best work to date by a city mile (though Reynolds has left his Holloway Road flat behind and moved out to the country. The traitor). Their triumphant return is all the more delightful as I had genuinely thought they had decided to split up (Jack it in). But ‘... Always Been’ is a surprise in its eclecticism, which is deftly handled (Jack be nimble), and it breathes new life into the band; brimming with energy, ideas seem to gush forth in a torrent, a group restating their position as one of the top soul bands in Britain.

It may be an album of shifting tones and temperament, where unexpected flourishes suddenly spark up (Jack in the box), but the songs remain, at heart, as always, about girls and drinking (what else is there?).

They tumble forth into the new century, Jack, transforming everything about them but staying absolutely the same at the same time, at the same time as deciding to do something else entirely that they’ve only just thought of, just because they can, just because they want to and the bag of tricks they’re rummaging around in still holds new treats after all. They’ve mastered many a different style (Jack of all trades) but still they are undoubtedly the same sweeping, soaring, emotive band obsessed with the same three things which they return to time after time: wine, women and song.