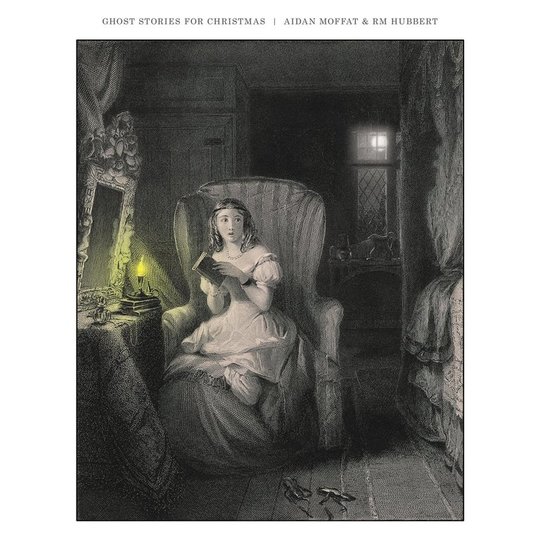 With the possible exception of Phil Spector, Brits do Christmas music way better than the Americans. Across the pond they have the big, sentimental celebrations of Mariah and Kelly Clarkson, or the drippy schmaltz of Bing Crosby and Andy Williams. Over here we have just three moods: pissed (Slade), miserable (Wham!) or cynical (Wizzard). The best (‘Fairytale of New York’) manage all three. On their second collaboration Scots indiepopfolk stalwarts Aiden Moffat and RM Hubbert are firmly part of that tradition.

Musically the watchword is ‘warmth’, from the literal crackling fire that opens the record to the child joyfully singing ‘Jingle Bells’ right at the end. Hubbert’s arrangements are lovely, centred around folksy finger picking, the lowing of a cello and keening of a violin. It’s always beautiful. ‘A Ghost Story for Christmas’, the song that inspired the whole project, is a clear highlight, skittish, jazzy drums driving along the plaintive picking, ‘Desire Path’ traces a direct line to Bon Iver’s For Emma, Forever Ago, quirky, minimalist beats underpinning the acoustic lonely guitar and poetry, while ‘The Fir Tree’ is disquieting and dark under Moffats’ narration.

From his days in Arab Strap onwards Aiden Moffat has always been a master storyteller, and as he’s aged his poetry has become more concise. Here he’s on impeccable form, telling simple, heartbreakingly relatable tales in just a few short lines. “How can absence fill a room? How can nothing hang so heavy?... You better watch out and you better not cry” he sings on ‘A Ghost Story For Christmas’, concluding, wryly “Oh come all ye unfaithful”. ‘Ode To Plastic Mistletoe’ is especially bleak, with its resigned, displaced and disappointed modern Christmas and New Year booze ups, where “the bargain fairy lights are all flash and fizzle, there’s no snow, just damp and drizzle”. There’s more here than a miserablists’ Christmas party though. Moffat’s great skill is his subtlety and, while for some, ripping puns as the tears splash onto the turkey would be enough, Moffat’s take on Christmas is richer than that. ‘Such Shall You Be’ has a little girl asking the narrator ”who’s that old man in the mirror?”, leading him to contemplate his aged face, seeing his tufts of grey hair, plump cheeks and ”eyes laden with the sacks of seniority.” Our hero attempts to slink off to the bathroom to look at his phone and feel sorry for himself, but a plea from his daughter changes the narrative. ”I can see the old man again,’ he says ”and he’s smiling”.

Aside from the original songs here, which are uniformly excellent, simultaneously warm and unfathomably sad, the choice of borrowed material is perhaps most telling of the tone of the record. Mud’s ‘Lonely This Christmas’ is stripped of its ridiculous nostalgia to reveal a gentle folk tune of utter heartbreak (Los Campesinos! did the same thing a few years ago, but Moffat’s bleak vocal makes this even sadder), while Yazoo’s ‘Only You’, a Christmas number one for the Flying Pickets in 1983, feels delicate and hopeful. A narrated rewrite of an old Hans Christian Anderson story, ‘The Fir Tree’, in which a sentient Christmas tree is excitedly decorated and then burned alive, is bleakly comic. These are offset by a straight reading of a Charles Dickens essay on the spirit and joy of the season. It’s unsentimental and unfussy, as both Moffat and Dickens’ best stuff usually is, but still radiates a simple joy in celebrating a special time of the year.