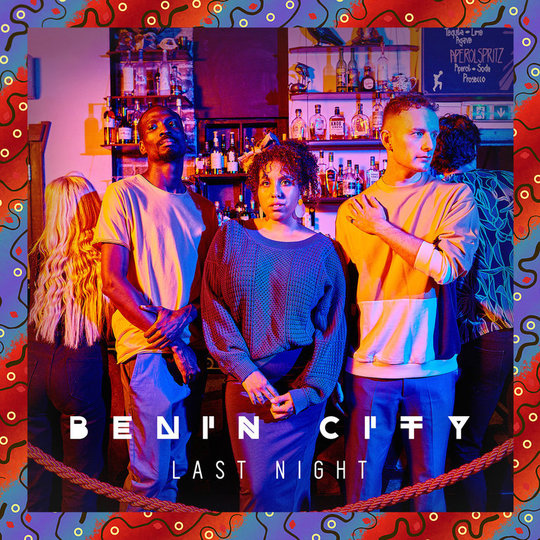 The nighttime belongs to the youth. For some, that’s the only time when anything makes sense – strangers unite on the dancefloor, old friends hail each other at the bar, the bass shakes everyone down. And for the devoted, there’s a point when this world offers way more than just a good time – the rhythm of the clubs becomes the only one they can comprehend, the only social order where they belong at all.

From that angle, Benin City’s Last Night both is and isn’t an album to bust out at parties. If you’d been paying attention at all to the chimeric career of spoken word MC Josh Idehen, you’d know that he’s no stranger at all to London’s after hours – from his intermittent moonlighting with metro electro team LV, to Benin City’s jazzy debut Fires In The Park, the charismatic front man has certainly been around and under and in between. And while his brief stint as half of the smoother R&B duo HUGH didn’t hit the pavement with quite the same impact, our hero certainly gained something from the encounter – a second perspective. If you stick around with Last Night, you’ll realise that this is a coming-of-age tale on multiple fronts: a reveller’s reluctant maturity, a steamy romance set inevitably on ice, but also a city’s relentless shuffle.

Now, back up a minute. Before we unpack what all this means, we have to remember: Benin City still bring the heat. Last Night gives Idehen every opportunity to showcase all his strengths – old mate Tom Leaper lends his mad brass skills and epic arranging, while LV’s back to mix the electro rumbles where Idehen’s infamous monologues take flight. Even long-time colleague Shanaz Dorsett returns to test her mate’s duet prowess. Like a DJ on a hot streak, the band switch seamlessly from grimy and bleak, to neon and sleek, to even the closer’s paradise lounge vibe without raising any brows. As Idehen remarks on ‘What The Hell Are You On’, "it all makes sense in the end in the nightlife."

And that’s precisely the point. The four-to-the-floor opening scene ‘Take Me There’ casts a panoramic shot around London, from anonymous warehouses to the Boiler Room, high heels and bare feet, refugees and city natives. That’s one of two axioms established early on in Last Night: one, that everyone’s an equal on the dancefloor, and two, from again ‘What The Hell Are You On’, the youthful assertion that “it’ll never get better than this”.

Yet, as time passes, both theories are stretched to their limits, and those breaking points are where Benin City really shines. The disillusion sets in as it usually does, in quiet waves – a soured relationship plants the seed on ‘Double or Nothing’, where Idehan and Dorsett share their first TV On The Radio-esque moment of regret. Then ‘Is This All There Is’ compounds nights of ennui into a terrible revelation: “I don’t even like to dance”. So when Idehen whips himself (as both a regular and a bar owner) into a fury over gentrification on the trap-lite ‘All Smoke, No Fire’, you can understand the indignation – both are losing the turf that they earned through years of long nights.

Depending on how you look at it, then, the comforting chorus of closer “Not the End” may seem like a cheap resolution to a cultural crisis: “I read it online somewhere / it will get better in the end”. But the verses also describe our protagonist in the light of day – hence the sunny Caribbean feel toward the finale – heading “back to the humdrum”. It’s a clever reminder that most clubbers – even the most fervent ones - can’t afford to go crazy every night without a rather normal lifestyle on the flipside. Likewise, the paranoid episode of ‘Reluctant’ only develops because “all I’ve got at the house is Wheatabix and milk”.

So while Last Night might seem dressed to impress, Benin City hold a mirror to London’s nightlife that condemns and empathises in equal turns. And, even more than Fires, Idehen and the gang weave a mesmerising web, one you could either sit and admire at home or bounce up and down on the dancefloor.