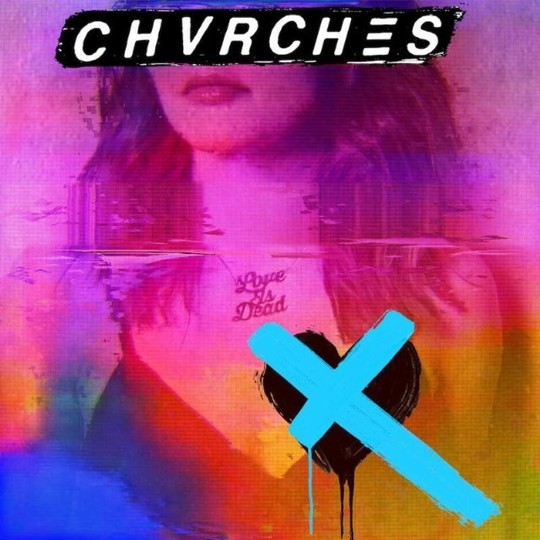 The third album by Glasgow’s Chvrches, Love is Dead, is the sound of your heart as it falls back in love. Let me set the scene. You’re in a club, and there’s your ex.

They shuffle toward you. Press play on track one.

‘Graffiti’; a symphonic sunrise that’s akin to the chemical-burn sensation when you first spotted them as they paid their entrance fee. The first four bars break, electronic ascendance as the barbed wire you caged their memory in with falls by the wayside.

Lauren Mayberry provides us with our opener “I’m running to ask you, did you achieve all you wanted to do/before we were dragged up/something was different and nothing was new…when did we move on/I didn’t feel it/nobody told me”.

Your scalp tingles. A person you once shared your precious existence with is there, large, watered-down glass of wine in their hand. Our song sours, you track the condensation down the side of the glass, the fluttery bars in the music. You realise, you can’t not think about the past. No matter how far you’ve run, how long you’ve tried to escape them, they’re familiar and different all at once. You’re itchy, pent up, you sweat.

“time stood still/and now we never will never will/write our names across the bathroom walls/graffiting our hearts across the stalls”.

You ask them what the fuck happened.

“I’ve been waiting for my whole life to grow old/and now we never will/never will.”

Your anger, the music, bubbles over Dr Jekyll mad-science. Shades of green and red. You call your ex out in public. The track, your will, it angrily charges forward. But you have been here before. Your ex knows your best art drives from your anger, so you lay your foundations of what is to come clear, true, predicable, strong.

Track two. ‘Get Out’. Your anger will win this argument.

Turns out that wine was for you. It’s not a large, it’s a spritzer, with lemonade not soda-water – just how you always have it. Your skin, the song, catches the emotion both familiar and distant. You’ve slipped back into the same battle. The album perseveres with the same style. It’s not different, but damn; why change a good thing?

You and your ex should leave.

One of you calls a cab to their place. This is ‘Deliverance’, and track three.

You’re past the point of no return. You can’t turn this album off, and you don’t want too. You trace those fluttery, opaque beads of synth-pop condensation down the side of the cab windows; as your ex-talks about change in the landscape to Moe or Jay in his Toyota Prius.

“Careful when you’re looking for a true confession mirror what you want to see”.

Fuck. Is this a clever idea? Track three is the sound of second-thoughts, of backtrack a little too late. Emotional regret. But of course, you’re already in deep.

You reach their place.

The argument picks up again. Track four. ‘My Enemy’. Knights on horse-back, but you don’t know who is good and who is evil. A conversation with a ghost, and so matches the ethereal vocals of Matt Berniger from The National. The argument, the music – less symphonic, more a soporific bedtime lullaby. You’ve got a myriad of memories of these arguments, held together by a lilt that’s ever-so-slightly out of time, so you’re half-comforted, half woken-up.

Jealousy, the cure, creeps at the edge of the room, the song. Through it all, you can’t help but think how you’ve never seen your ex, or the band, expose their heart on such an intimate level.

So, this is the point where the scale shifts. You move close to each other. Rough hands, careful ones, wipe away tears. After all, now Love is Dead has shown you it’s heart, there’s no need for more subtlety. No need for politeness.

There’s a break in the argument. Track five. ‘Forever’. Your ex still wears the same perfume, but from here you can smell they’ve changed their strawberry shampoo to something muskier. More adult. Thus, grows our bond with Chvrches third album. You feel a sense of something; older. Your ex has grown up. They promise you, they won’t hide behind those symphonic sunrises anymore.

There’s one thing you’ve always wished you could say to them.

“I always regret the night I told you I would hate you too forever”.

You kiss. A familiar warmth moves back up your spine, your heart contracts. Blissful darts of pain, a raw, blip on the ECG machine; your whole body moves and jumps with an insistence your heart has stopped beating irreconcilably.

With that kiss you’ve built a more precious castle, so your apology isn’t made with regret. It’s a torch-song, empowered by Love is Dead’s exposure of it’s dark heart – and thus you’re in love again. So runs the rest of the album, a celebration of your reunion; and immersive treat of electronic love songs. You’d forgotten what it was like to feel so free.

Chvrches may declare that love is dead; but you just fell right back into it. You won’t shake this record for a very long time. When you close your eyes, you’ll forever be able to trace the outline of its face. Truth is, you can’t control who you fall for. What has profound effect on your memory. But I promise, that’s okay. It happens to us all.