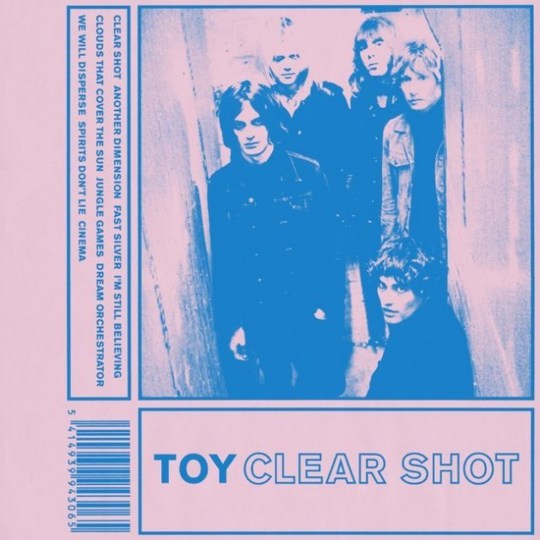 As one of the first UK bands to fully embrace the recent psych rock resurgence, Toy have never been ones to rest on their laurels. Constantly evolving and developing their sound, they've moved into previously unchartered territories with every subsequent release since the seven-and-a-half minutes opus that was debut single 'Left Myself Behind' launched them at the tail end of 2011.

While the band's self-titled first LP effectively sequenced their live set of the time into one neatly packaged compendium, its 2013 follow-up Join The Dots demonstrated their ability to push themselves to the limit and explore other territories beyond the confines of any one specific genre. So it probably shouldn't come as too much of a surprise that album number three represents another significant sea change for the Brighton five-piece.

The gestation period for Clear Shot has been a steady one, with the band having spent the majority of 2015 writing, demoing then recording the album in various locations from Walthamstow to Stockport. In that time they also lost a member, with keyboard player Alejandra Diez departing to be replaced by Max Oscarnold from The Proper Ornaments. While Diez's sonic interludes proved a key element of Toy's sound on those first two albums, Oscarnold comes to the fore at regular intervals throughout Clear Shot. Indeed, its that unpredictable streak of not knowing what's coming next which makes Toy such an endearing prospect, and ultimately acts as a catalyst for Clear Shot's most precocious moments.

Inspired by Fairport Convention, Ennio Morricone, acid house and The Wicker Man film soundtrack among other things, Clear Shot revels in its mix and match approach. Effects-laden guitars launch the title track into a euphoric haze similar to that eschewed by many bands on the Creation Records roster circa-1991 before the song changes direction completely in its final third.

Better still is the charismatic 'Another Dimension', which sees the band in refined mood like post-Floyd Syd Barrett only with more layers and ripples. The biggest criticism here - and one that might irk those more in tune with their earlier material - is that Clear Shot lacks the immediacy of its predecessors. Instead, its a record that encourages - demands even - repeated listens and as a result, such perseverance reaps its rewards.

Both 'Clouds That Cover The Sun' and 'Jungle Games' display an elegant sense of maturity while epic closer 'Cinema' bristles with ambition even if the results aren't necessarily the grandiose finale it was intended to be. Elsewhere, 'I'm Still Believing' and 'Dream Orchestrator' provide capable reminders of Toy's cosmic rock outs from yore but its the dreamier, lovelorn compositions that steal the limelight and honours here.