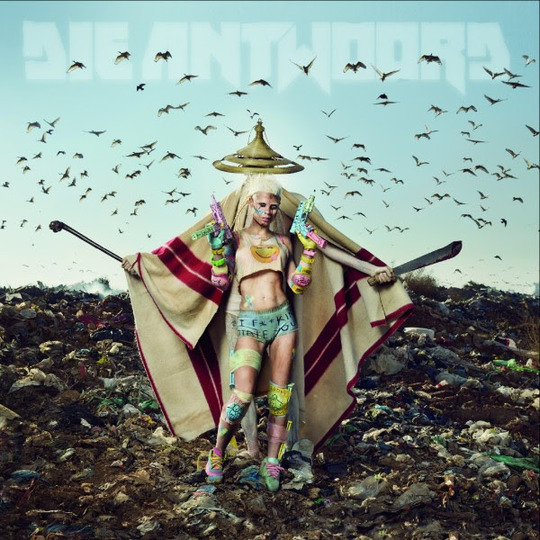 Faced with the new Die Antwoord album, you may ask the question ‘does this band matter?’ After a couple of spins of Mount Ninji And Da Nice Time Kid the answer is an emphatic ‘yes’.

Some may begrudge Die Antwoord for not moving the dial enough on this album, especially after the band’s own comments suggesting a seismic shift, but as soon as ¥O-landi Vi$$er dons her inept-demon persona (a persona that peppers the album) luring Ninja to the dark side with nothing more than coffee, the audacity of a gangsta rap song about drinking black coffee (opener ‘We Have Candy’) brings a welcome smirk to the side of the mouth.

And the album, while inevitably stuffed with humour as per the MO of any good rap set, is as dark as coffee, especially as it comes to its close. ‘Daddy’ could be perceived as a musical realisation of their ‘Uncle Jimmy’ skit against former label boss Jimmy Iovine from Ten$ion, if they’d fallen for the industry promises. Thankfully they didn’t.

Lead single ‘Banana Brain’ provides the album’s big warehouse beat and ¥O-landi shows she can do a commercial chorus as well as anyone, but sonically this blasts commercial pop a new one. That’s always been an appeal of the band. Go big or go home. Live as though it’s make or break. Not everyone’s comfortable with that, but Ninja and ¥O-landi are. Fair play.

Part of the reason Mount Ninji And Da Nice Time Kid is darker than its predecessor, ‘Donker Mag’ is that it’s less overtly violent, but there’s just as much implied. While the comedic segue of ‘Wings On My Penis’ introduces Lil Tommy Terror who, Jonah Hill in ‘Superbad’-style, has an obsession with drawing penises (and praying to grow wings on his) and culminates in a superb performance from Jack Black as King Rat in the West-End styled ‘Rats Rule’, come ‘Alien’ this delves into the darkness.

With ‘Alien’ the music-box, xylophones and accordions come out for a song that could soundtrack The Village of the Damned, or a Residents’ curated freak show and while there’s nothing in the lyrics to suggest violence, it’s a song that drips in an atmosphere of vengeance. It then bleeds into the ‘Street Lights’ that gives room for Ninja to, well, kinda’ croon about a murder he’s going to commit. The track closes with remorse that’s spluttered out over gangsta-rap snares but the line of ‘blood, blood, so much blood’, rolls out with a rich, thick, crimson.

Die Antwoord. You can take them as a joke, you can be fascinated by a psycho-sexual investigation of their songs and personas, but the bottom line is they make huge rap tunes. Closing with a dance-ballad in ‘I Don’t Care’, they open the high church of rave and let the sermon begin. It washes all past sins away and as they cite "God is a DJ, and he loves you", stand up and give thanks.

I Had A Dream That You Were Mine