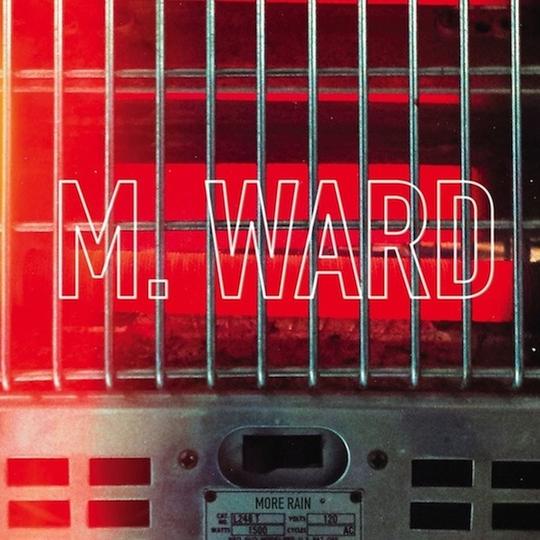 Possibly the only thing more nuanced than an M. Ward record is the typical review of a M. Ward record. Bob Dylan, a slightly older fossil, has been gifting critics golden subject matter for decades, such as his motorcycle accident, his religious conversion, and most especially, his rather bizarre decision to package a cow chip he found from his farm and officially package it as 1988’s Down in the Groove. But for over 20 years, M. Ward has been consistently astonishing with hardly any 'fake motorcycle accident' stories to his resume. Critics have repeatedly showered him with praise, and even showered She & Him with praise. But with only so many synonyms for 'good' around, critics have taken to spewing vitriol at superfluous things that have little relation to the music at all in a pseudo-intellectual strategy to depart from the ole’ “M. Ward has delivered yet another good, concise album yada yada yada.’ As one would expect, the 12 brief songs on M. Ward’s More Rain hit, plow, and bulldoze their way right into the sweet-spot of joyous existential-wonderment. And while the title is far from Shakespearean, his haircut isn’t exactly en vogue anymore, to the disappointment of many, this review will sidestep sensationalising these paramount concerns for an analysis of the sensational music itself.

Owing equal parts to Ward’s eccentric Portlandia roots and his 'Dream of the 1990s' musical tenure, he excels at the art of scene placement. With 'Pirate Dial' he fully inserts himself by not inserting himself, allowing the listener to trade places with him via his blustery poetics and abound in his blanketing yet minimalist soundscape. Ward aids and abets this identity theft by employing keen spy games rather than work within the introspective sentimentality of 2012’s A Wasteland Companion. What follows this early upshot is a hefty portion of comfort food through sound, inevitably providing the soundtrack fodder for dozens of soon-to-be-released indie films.

The collective thematics of each track’s weathery ambience makes More Rain’s title a fitting companion piece. But what commences as a lush drizzle evolves into a torrential cascade as Ward experiments with breakneck tempo on 'Time Won’t Wait Up'. Rustic-sounding drums compliment his haggard voice, which shifts from bombastic whispers to cooled bellowing. Like the bulk of his projects, there is no place for filler here. Each song seems to emanate from a protracted repetition of chiseling, shaving, and sculpting, yet somehow remaining faithful to an impenetrable fog of organic spontaneity, like the creaky acoustics of 'I’m Listening'. Hints of doo-wop and stabs of operatic strings betray the initial simplicity of the ballad. Regardless of whether or not you think Ward would look better donning a moustache, this harmonious juxtaposition effect is something only the masters can achieve.

One of the hallmarks of Ward’s success over the years is that there is no singular 'M. Ward sound', but More Rain is arguably his most malleable exhibition to date. In interviews, Ward stated that he wanted to thematically reflect humanity’s inevitably bipolar survey of contemporary life and the relationship between music; one minute reading news of 4,000 holes in Blackburn, Lancashire, and the next coming together over shared catharsis through song. Usually one to shine light on the adversities of life, Ward seems to revel in contentment. 'Temptation' surprisingly commences with a heavy metal ambience, then quickly settles into a catchy, cavorting riff buttressing an equally rollicking Ward for one of the album’s seminal displays.

Even the most hardened, stoic individual is rendered prostrate when Ward sets his sights on love. Birthed from fiercely uninhibited yearnings of Van Morrison, authenticity is never a matter of query with Ward. On 'Phenomenon' he almost savagely defends his love interest, snarling in sweet-voiced couplets while nakedly exposing and even bleeding his own devotion. With More Rain being M. Ward’s 300th album or so, there is a serious danger that he will soon have more songs to his name than there are words in the English language. In light of such immaculate artistic consistency, it’s probably best to just to take a moment to appreciate that.

You Know Who You Are