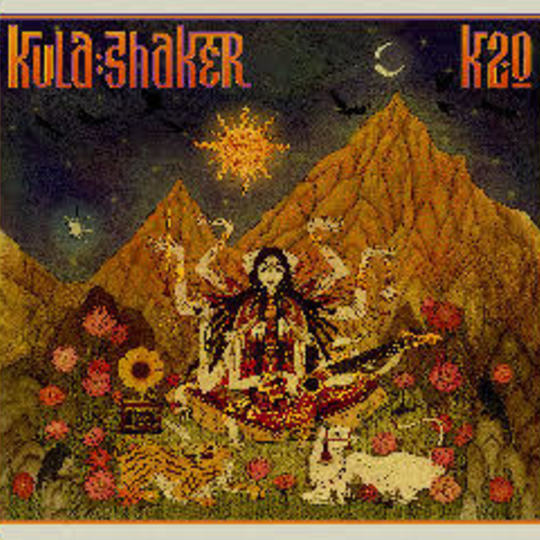 Say what you like about Kula Shaker, they did manage to sneak an ancient Indian hymn into the UK Top 10. Reaching No. 7 in 1996, ‘Govinda’ remains the only British top ten hit to be sung entirely in Sanskrit and, sure, you could denounce them as culturally appropriating poshos, but pretty much all rock‘n’roll is appropriation of the most ham-fisted variety and to their credit Kula Shaker were lifting ideas from more imaginatively global and spiritual sources than Noel Gallagher with his plagiarised Slade riffs and Gary Glitter lyrics.

They may have been privately educated but at least Kula Shaker offered a more psychedelic take on Britpop than most of their Nineties rivals who, despite wearing their Beatles badges proudly on their parka sleeves, definitely skipped ‘Within You Without You’ on their Sony Discmans. Kula Shaker were also more interesting than our contemporary crop of Mumfords, Ronsons and Welches. We had a better class of poshos, back then. It’s hard to imagine Marky Mundane Mumford saying anything as inadvisably #problematic as 'I'd love to have great big flaming swastikas onstage, just for the fuck of it' or 'You can see why Hitler got support. It was probably the uniforms that swung it.' (Come on, that first bit of Crispian Mills’ notorious NME interview was about reclaiming the swastika as an ancient spiritual symbol and the latter quote’s no worse than what David Bowie said, may he rest in peace.)

You could even set those dodgy quotations to some rackety indie backing tracks and you’ve almost got the new Fat White Family album. Tactfully, Kula Shaker don’t do that here. Drawing parallels between classical Athens and modern politico-economic woes, ‘Death of Democracy’ is a politer, earnest critique of the fact that money sadly rules over everything. To be honest though, the track needn’t have been included. Not only is its jangling Kinks-ish approach one of the album’s weaker musical moments but, given Mills’ background and seemingly inerasable interview indiscretions it can’t avoid coming across as an opportunistic attempt to reiterate that he genuinely ain’t no fascist. But no one really still thinks that anyway and, more importantly, nor are they particularly bothered because he’s no longer on the front of any of our magazines.

Besides, Mills is simply better (if still at times clumsy) when writing about more personal, spiritual or quasi-philosophical matters. K 2.0 begins very promisingly with the loose psych-rock stomp of ‘Infinite Sun’. It’s chant-like lyrics about flying like an eagle and “ch-ch-changes” are throwaway stuff but musically the band weave together their sitars, handclaps, organs and Seventies guitar tones to somewhat impressive effect. ‘Death Of Democracy’ is sandwiched between two stronger numbers: ‘Holy Flame’, which places shuffling ‘Coffee & TV’ verses alongside a rowdier love-struck chorus and ‘Let Love B With U’ which, if you overlook the lame textspeak of its title, is a smooth organ-heavy ditty that would probably get Austin Powers feeling pretty frisky. Bringing things down a notch, ‘33 Crows’ resembles one of those mournful Dylan break-up ballads with the addition of George Harrison hiding behind a paisley curtain. There’s also the obligatory Hindu interlude in the form of ‘Hari Bol’ but the indisputable highlight is ‘Here Come My Demons’ which opens as a (fairly self-pitying) acoustic lament, with Mills hitting some existentially distraught high notes. Then its midsection suddenly breaks into a fun and fuzzy hard-rock mash which in turn fades into a hazier, trippy outro. It’s a journey, man.

Not everything works that well, especially in the LP’s second half. Kula Shaker have never deployed their influences in particularly subtle ways and its spaghetti western sonics and cliché-ridden lyrics about final hands being dealt and the chips being down mean that ‘High Noon’ is not going to be hailed as the greatest song the Walker Brothers never wrote. Similarly, the undercooked funk of ‘Get Right Get Ready’ won’t be troubling Craig Charles’ playlists anytime soon. And by the time they reach the “lifty lifty krishna krishna” middle section of closing track ‘Mountain Lifter’, the ’Shaker are plumbing new depths of accidental self-parody.

Still, we’ll take that over the High Flying Birds, right?