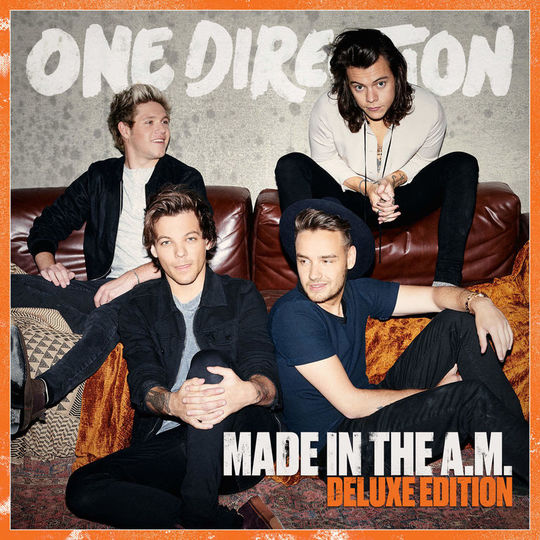 Louis Tomlinson has a tattoo across his chest that reads, in big gothic lettering, 'It is what it is'. You can’t argue with that, can you. ‘It’ quite literally is what ‘it’ is, whether ‘it’ is a banana, a shit tattoo or a One Direction album. 'It is what it is' is one of those things people say when they haven’t got anything to say but are contractually obliged to say something.

You might wonder why Louis didn’t just go with a massive ¯\_(ツ)_/¯. You could say the same about Made In the A.M. Instead of dragging themselves and their assorted collaborators and marketing teams and bookers and agents and runners and assistants and harems through the tedious process of writing and recording 17 songs (four for the Deluxe edition), One Direction could have stuck a big ¯\_(ツ)_/¯ on iTunes and a special 3D printed one in shops where the CD was meant to go and saved everyone a lot of bother.

They’ve been up all night, made some midnight memories and now they’re fucking exhausted. They kind of just want you to leave so they can go to sleep. After all, no one cared enough about Made In The A.M. to put the TITLE TRACK on it ('A.M.' is only on the deluxe edition and, as we all know, deluxe editions are bullshit).

If there wasn’t room for the track that gave the album its name, you’d expect the 13 core songs to be amazing, wouldn’t you? Even more so given that this is one of the biggest pop bands on the planet with access to some of the best songwriters out there. Every song will be at the very least good and at best spine-tinglingly amazing, right?

There are some good songs on Made In the A.M. Most of them have already been singles - ‘Perfect’ is good if you can ignore the fact that it’s essentially a list of excuses for treating you like shit, ‘Infinity’ is a good end-of-the-last-show-ever-glitter-cannons-and-goodbye-tears tune, ‘Drag Me Down’ is still a bit of a slog if you ask me but it’s acceptable. ‘Olivia’ is the only brand new wonder. Co-written by Harry Styles, it has everything from alliteration to a Willy Wonka reference that goes nowhere and means nothing. There are Disney flourishes and Beatles-ish backing harmonies and it’s been stuck in my head for days. It’s the only song on Made In the A.M. that sounds even vaguely like anyone is having any fun. By contrast the forced 'fun' of 'Never Enough' – essentially the unholy love child of 'The Lion Sleeps Tonight' and 'War (What Is It Good For)' – makes me want to shoot nails into my ears so I never have to hear again.

The problem with One Direction is that they never really figured out who they are as a band. The other problem is that it turned out that who they are individually can be summed up as ‘totally different to each other’. That might work in a sitcom, but a band? Four wilful young men pulling in different directions raises the question of who is happy after a four-way compromise and the answer is literally no one.

So instead of making a One Direction farewell album, they made a Take That comeback album. Middle-aged cash-strapped Take That exploiting everything Gary Barlow knows about swelling strings and backing oohs. It’s a Sunday morning cookery show. It’s a Marks & Spencers advert. It’s not that this album is particularly bad, it’s that I don’t understand why it isn’t better.

Track five on Made In the A.M. is called 'End of the Day'. “All I know at the end of the day,” the chorus goes, like an old man leaning on the bar to tell the barmaid how to think, “is you want what you want and you say what you say.”

Because at the end of the day, it is what it is.