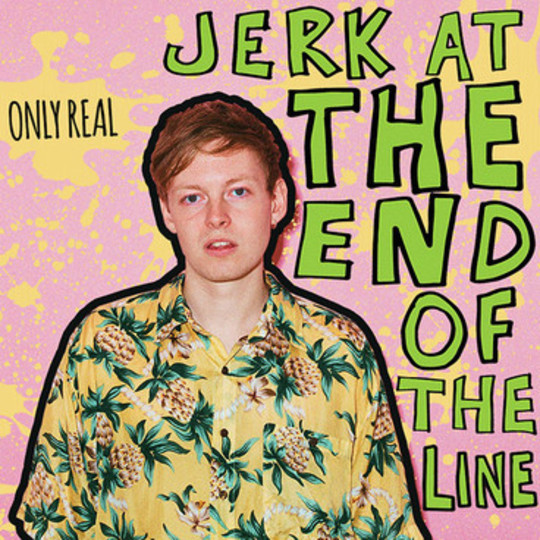 I press play. The impact is instant. Cod rap verses smashing together with slacker guitar twangs without a care in the world for structure. Every once in a while we're interrupted by a robot bleeping about something or other. It's pretty wild, avant-garde stuff.

Then, it clicks. Something isn't right. The album stream has corrupted. So after a few bashes of the keyboard and a quick reboot the real Only Real record emerges and, well, let's just say it's not the satirical, chopped up, cynical vision of Britain it appeared to be.

In reality, Jerk At The End Of The Line is a much more formulaic, traditional record, and is all the worse off for it. Instead of disturbed time signatures and knowing nods to some of music's cringiest moments we're left with an album of woozy indie hip-hop sketches that sound new and familiar at the same time.

However, in some ways, the record is innovative. It manages to dream up a brand spanking new genre: SU pop. You can almost hear the cheap shots being spilt onto Hollister jogging bottoms throughout the duration of 'Can't Get Happy'. Saying that, the chorus is pretty huge. It takes you through a wormhole to an alternative reality where The Maccabees have embraced Mike Skinner's down-and-out rhymes rather than Guy Garvey's knack for an epic tune. However, the thing about choruses is that they're followed by a verse. And Only Real isn't the best at the whole 'verse' business. A painful suburb rap twang rears its ugly head and throws us back to the real world where indie artists mash disparate genres together in the hope of somehow becoming relevant.

There's a lot less to the album than Niall Galvin would like to have you think. Boil Jerk down to its key ingredients and you're left with nothing more than a slightly soggy Jamie T off-cut, or a King Krule remix with all the moody bits taken out. The songs are swimming in indie-hop beats that have been riddled with reverb that try and force you to reminisce about some summer that didn't exist.

There are a few hints that, in time, Only Real will develop into something other than a Leeds and Reading NME tent mainstay. 'Petals' is the one and only time Galvin gets his sulk on, and it actually works pretty well. The rap gimmick vanishes and we're left with something altogether more wholesome. The guitars seem to chime in the perfect way and everything just feels right, proving that sometimes cynicism is the only option.

It's clear from the evidence on show on Jerk On The End Of The Line that Only Real really needs is a bit of a shake up. He could try his hand at reggae maybe? Or jazz? Or... wait for it... I've got it. He could release a remix album. I know just the people. Get that streaming service on the line.