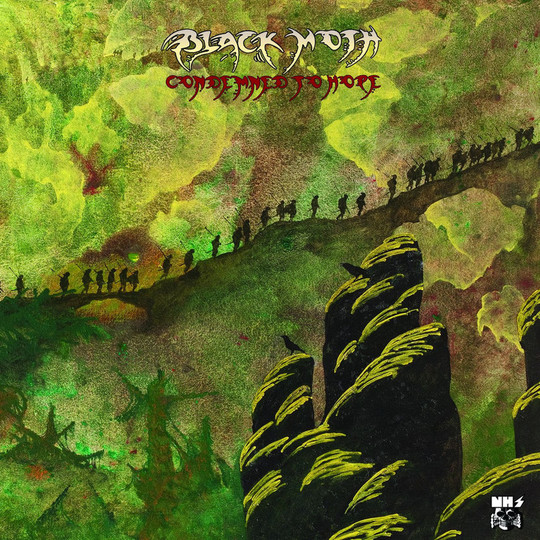 I don’t think it’s too controversial to suggest that Leeds has the best music scene in the UK. At the very least, it functions as more of a living, breathing musical community than London’s disconnected sprawl of sonic sects. Black Moth exemplify this perfectly, successfully straddling the city’s ever burgeoning metal and noise rock scenes whilst also easily gaining enough indie points to slot seamlessly onto the bills of Live at Leeds or even the titanic teenage getaway that is Leeds Festival.

It’s not beyond the realms of possibility then that Condemned to Hope might just see the quintet accelerate along the path to becoming Leeds’s next substantial breakout act. With Harriet Bevan’s powerful voice leading the charge, one senses that anything might be possible, but it would be unfair, and lazy, to focus this review on her contribution. Condemned to Hope is very much a team effort from a band that works as a solid group.

Being, nominally at least, a doom band, Black Moth get their fair share of Sabbath comparisons, but these are largely wide of the mark. The guitars of Jim Swainston and Nico Carew are generally far more indebted to late Eighties / early Nineties sounds than to the venerable heroes of early heavy metal. The frenetic chug of Buzz Osborne at his best is adeptly reconstructed on single ‘Room 13’, whilst ‘White Lies’ is more indebted to Steve Albini or Duane Denison. Whisper it but ‘Red Ink’ even sees the pair drifting pretty close to dual-guitar Nirvana mode.

If Black Moth remain moored to metal then it is largely thanks to the rhythm section of Dave Vachon and Dom McCready, who work together to offer some considerable low end heft to proceedings. The overall effect isn’t that dissimilar to Boris at their most accessible. Pop songwriting blended in with heavy metal drive and all sorts of art rock weirdness generally makes for pleasant listening and Black Moth certainly haven’t broken that mould here.

All these things were, of course, present on debut album The Killing Jar but this time around things are shrouded in a far darker atmosphere. From the specially-created Roger Dean cover art (yes the Roger Dean)) to the album’s bleak title and its references to both gothic horror creations and the everyday horrors of real life in Bevan’s lyrics (I’m pretty sure I heard the Daily Mail get a namecheck at one point), Condemned to Hope certainly feels grim despite its listenability. One can almost imagine them opening for Nick Cave circa Murder Ballads - given that Bad Seed Jim Sclavunos is the producer here, perhaps it’s not completely wishful thinking to imagine the two artists being paired on the road at some point in the future.

What ultimately makes Condemned to Hope a real success, however, is not so much any of these things but the sheer conviction with which it delivers the goods. There are bands not all that dissimilar to Black Moth in every other city in the country but few play like they really mean it. Although this does not mean they carry off everything they try - there are a couple of dud tracks here it has to be said - it does earn Black Moth a major victory here. Never ponderous, always engaging, this is doom you can put on when your non-metalhead mates around and when the world starts to end, which is a pretty great combination by all accounts.