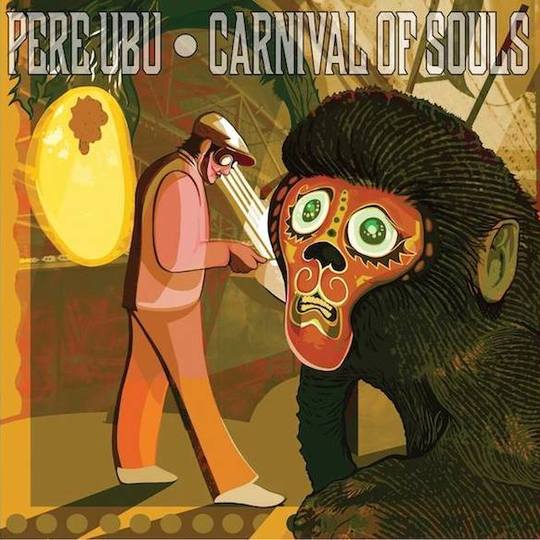 Carnival of Souls starts like a washing machine choking to death. So far, so Pere Ubu.

But after opener 'Golden Surf II', at least ‘Drag the River’ is much more straightforw… Oh wait, no it isn’t. The bass line sounds like it’s being played in a fishtank at midnight. The drums seemingly spend most of the song trying (rather desperately) to escape the song itself and David Thomas… well, David Thomas is himself, and yet not himself, which is to say that he completely fulfils the role he has defined for himself over the past 39 years.

Thomas and his various co-conspirators in Pere Ubu over the years have always been utterly indefatigable in their pursuit of what Thomas has often (perhaps only half jokingly) referred to as the sound of ‘avant-garage’. Carnival of Souls is hardly representative of a change in mission statement, but it is demonstrative of Pere Ubu’s ability to achieve their goal in a wide variety of ways. There are jolts of the frenetic post-punk with which the band originally made their name, hints of the musique concrète noisescapes that always compromised the group’s ability to fit in with their contemporaries, and moments of disarming pop dynamism.

This being Pere Ubu there’s also something new on the table, with Carnival of Souls being specifically designed to sound like the product of 'a machine composed of human beings' - a midpoint between the clarity of Kraftwerk and the chaos of Suicide, with Pere Ubu’s distinctive roots still part of the mix. Interestingly, Thomas has chosen to see this as Pere Ubu’s contribution to the lineage of progressive rock, naming Van Der Graaf Generator’s 1971 classic Pawn Hearts as an inspiration, which is certainly apparent through the record’s mood, if not via clear musical similarities.


Where there is some clear crossover, perhaps, is in the increased prominence of the band’s electronic side. This is a record largely framed by the contrast between analogue and digital; no more pleasingly than in the addition of Hove-based clarinetist Darryl Boon to the ensemble. ‘Dr Faustus’ is largely composed of electronic gurgles and groans, Boon’s noir-esque contributions providing a perfectly menacing new texture to the disorientating mix.

As hinted at by the reference to the consistently bleak works of Peter Hamill et al, this is also a record defined by darkness, with many of the songs arising out of Pere Ubu’s live soundtracking of the 1962 cult horror film from which the album takes its name. “Come on feel the fricking cold”, Thomas cries in ‘Bus Station’, reducing guitarist Keith Moliné’s otherwise jaunty riffs into terrifying stabs of six string foreboding. ‘Carnival’, is a particularly sinister ditty: “If you feed the monkey, the monkey will say ‘I love you too’; if you feed the monkey, the monkey will reward you”.

The lullaby like ‘Irene’, meanwhile, is an almost hymnal lament, reeking of despair and loneliness, yet also of acceptance and assurance; “I put a spell on you because you’re mine… You will say you love me and I will say it’s all gonna go wrong, not gonna turn out very well at all”. Followed up by the grotesquely gargantuan closer that is ‘Brother Ray’, it stands as a rare moment of obvious beauty on an album that tries its best to shroud its entire contents in mist and gloom.

There is a tendency in reviews of Pere Ubu to assume that their spirit is to be admired more than their actual music, that they deserve credit more for being consistently bizarre than for being consistently brilliant. Such a sentiment is all well and good but, much like similarly long lasting contemporaries The Ex and The Fall, it tends to result in each new Pere Ubu record being received as 'just another Pere Ubu record'. Carnival of Souls is not just a new Pere Ubu album, however. This is the sound of a band that, all things considered, has upheld remarkably high standards over a four decade career, and this eighteenth studio album is the latest highlight in a long list of very genuine standouts.