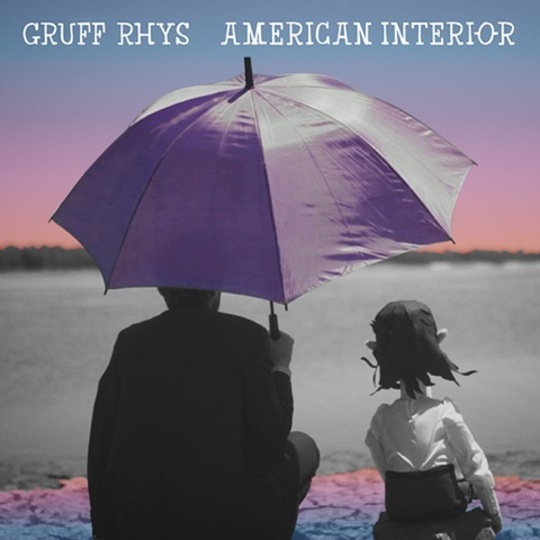 After concept albums about a wealthy Italian Trotskyite, an eccentric car designer, and a film about a search for lost Welsh tribes in Argentina, the news that Gruff Rhys was to release an album about something as straightforward as an American explorer could be seen as something of a let down. Like most projects involving Gruff though, there’s more to American Interior than initial impressions suggest.

For one, the explorer in question is John Evans, the man who first mapped out the Missouri river whilst searching for another of those lost Welsh tribes, and who Rhys has suggested might also be a distant relative of his. In addition, an accompanying film, book and an app are released alongside the record, allowing you to explore the story in pretty much every medium you could wish for. The fact that Rhys has been promoting American Interior whilst carrying around a Muppet-style puppet of John Evans and wearing a hat shaped to look like a wolf head - as if that’s what most singer-songwriters in their mid-forties do - only adds to the particularly idiosyncratic charm that this Welshman seems to personify.

Away from all this, though, the style of music itself will be immediately familiar to anyone with even a passing knowledge of Gruff’s work as a solo artist, with Neon Neon or in Super Furry Animals. In particular, this record seems to share certain similarities with Hotel Shampoo, his last solo album, mixing straight-up pop songs with more introspective fare, beautiful orchestral moments and even a couple of more out-there tracks. That’s not to say that American Interior is a retread – more that it’s further proof of a man growing in confidence as a solo artist, with an ability to bring together far-out concepts with immediate, well-crafted music.

The opening title track is a clear highlight, a fine example of what Gruff Rhys as a solo artist does best – expansive, slightly melancholic rock with an infectious melody at its heart. Just like ‘Shark Ridden Waters’ on Hotel Shampoo, ‘American Interior’ builds around a circling, hypnotic rhythm, with Rhys’s spaced-out vocals floating above before breaking towards a blissful chorus. It’s conventional, 4/4 time indie-rock – there’s even a guitar break in the middle – but it’s done supremely well.

At the other end of the spectrum is ‘Allweddellau Allweddol’, a Welsh language track that harks back to early SFA b-sides or their acclaimed Mwng album. Produced in collaboration with DJ/producer/Twisted Nerve founder Andy Votel, it's built around a slightly sinister sample of a children’s choir which speeds and slows to fit with Gruff’s drowsy, mystical vocals. Of course, short of speed-learning Welsh there’s no way of telling what it is he’s singing about, but it sounds absolutely captivating.

In between these two pillars, the rest of American Interiors ties the story of John Evans around Rhys’s own modern travails, and is most successful when that melancholic edge is added to proceedings. ‘The Swamp’, told from Evans’s perspective, is an epic ballad that initially seems to be playing at the wrong speed before breaking into another of those blissful choruses and the kind of hopelessly optimistic keyboard motif Grandaddy built their career on.

Elsewhere, ‘The Last Conquistador’ and ‘Lost Tribes’ seem inspired by the Neon Neon side of Rhys’s persona, using vintage synth sounds to build sparse, slightly off-kilter backing to the tales of lonely travel in a lawless American past.

The only slight missteps on the record come when Rhys attempts to counter the melancholic air with some more upbeat numbers. ‘100 Unread Messages’ manages to stay just the right side of kitsch with some clever musical misdirections but ‘The Whether (Or Not)’ wobbles over the line a few times – it’ll probably be chosen as the next single and never be off the radio, but hey, what do I know?

So, it’s another excellent Gruff Rhys album then, tied around an unusual concept but not bogged down by it. Lyrically, the concept works well, drawing parallels between Evans’s life and that of a travelling musician – without straying too far into mawkish meandering. It nods to various points in Rhys’s career, without simply retreading familiar paths, only slightly veering off course but quickly righting itself. You do wonder exactly how many lost tribes of Welshmen Rhys can track around the world for future inspiration, but at least you know that whatever strange concept grabs his attention next, there’s likely to be a cracking record at the end of it.