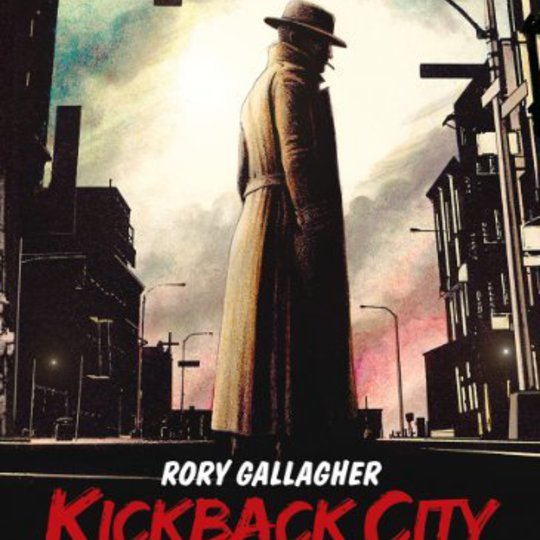 Before I think about undertaking the mammoth task of trying to elucidate what Kickback City actually is, I would take a moment to reflect on Rory Gallagher’s life and career, if it weren’t for the fact that the two are barely distinguishable. One of the most criminally underrated guitar players of the twentieth century, his prodigious talent was matched by his work ethic; Dylan might have coined the phrase ‘Never Ending Tour’, but Gallagher’s life was very much the embodiment of it. When he died in 1995, he left no immediate family - the only marriage he’d had was to the road - but his influence was profound, with Slash, Johnny Marr and Brian May heading up an impressive list of musicians to have acknowledged his significance. One can only assume that his refusal to commit fully to either blues or hard rock might have cost him a more prominent place in either genre’s history.

There’s already at least four million different compilations of Gallagher’s work, both solo and with Taste, so anything arriving with as much fanfare as Kickback City would need to promise something wholly different. It’s a collection of the songs that, explicitly or otherwise, represent the manifestation of Gallagher’s love of crime noir. To go along with it, crime writer Ian Rankin penned a novella, The Lie Factory, based around the themes in the Gallagher tracks in question. It’s an ambitious attempt to breathe new life into a back catalogue that’s been repackaged countless times.

The need to include only the tracks that deal with the relevant lyrical themes mean that, musically, Kickback City is a mixed bag. Disc one - exclusively comprised of studio recordings - has been frontloaded with the songs most relevant to the concept; the title track and ‘Continental Op’ are both staples of the distinct type of ‘hard blues’ that Gallagher had such an affinity for. A handful of real gems are present and correct - ‘Kid Gloves’ swings between improvised riffing and racing keyboards, whilst ‘In Your Town’ and ‘Loanshark Blues’ serve as terrific examples of what happens when Gallagher’s scattershot stylistic approach proves thrillingly effective, with raw vocals married to some delightfully erratic signature solos.

Taking Kickback City purely as a compilation album, though, and ignoring the (often contrived) attempts to weave in nods to the crime noir aspect of the project, it’s often a pretty jarring listen. Previously, collection’s of Gallagher’s work would - sensibly - shy away from making things too sonically diffuse, usually either focusing on either blues or rock; Kickback City’s failure to discriminate contributes to its unharmonious feel. The jump from ‘Barley and Grape Rag’ - all shuffling acoustic guitar and harmonica - straight to the rollicking ‘Doing Time’ is a case in point.

Gallagher’s music dates from a time when live records represented far more than the poorly-mixed opportunities for a quick buck that so many of today’s equivalents amount to; the searing energy and appetite for improvisation that came to be his trademarks have been superbly captured on a number of occasions in the past, with Irish Tour ’74 a fine starting point for beginners. The inclusion of a live disc here, then, certainly isn’t unwelcome, particularly as some of Gallagher’s most exciting cuts were never captured in the studio. A terrific, rare rendition of ‘Off the Handle’ is the clear standout; he’s one of the few modern bluesmen to be able to pull off songs of this length (in this case, nine minutes) simply through the vitality and charisma that seems to bleed out of his guitar playing.

The inclusion of ‘Continental Op’ and ‘Loanshark Blues’ a second time suggests that efforts to source crime-related songs from the catalogue weren’t as fruitful as suggested; the latter is an electrifying unreleased take, but you won’t take much away from the live version of the former that you wouldn’t have from the studio iteration.

Ultimately, the links between Rankin’s novella and the actual music on Kickback City seem fairly arbitrary, but the ambition displayed and desire to approach the very concept of the compilation album from a different angle should be applauded. This is a hectic, disorganised record that doesn’t display Gallagher’s genuine brilliance quite as often as some of his indispensable live releases, but if the publicity surrounding it helps to introduce new listeners to the genius of his guitar playing, it’ll prove a worthy venture indeed.