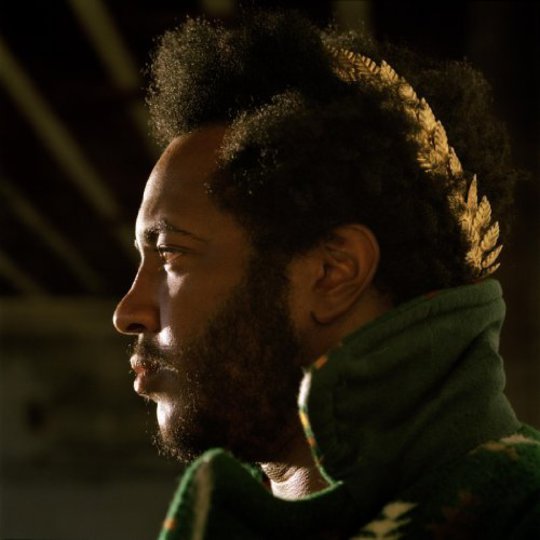 It’s hard to find a more ‘Brainfeeder’ artist than Stephen ‘Thundercat’ Bruner. He’s got the jazz family connections box firmly ticked; and as his work on Cosmogramma showed, he has more than enough of the kind of technical chops that producer and label owner Stephen ‘Flying Lotus’ Ellison looks for in collaborators and signees. Spiritually he fits like a glove: his music is heavy with the cosmic Ra-isms, offbeat wit and soulful musings that have permeated the label’s releases. And now, musically, with Apocalypse, he’s come closest to capturing the sounds one could imagine resonating inside Ellison’s own head, a kindred spirit and fellow traveller to accompany the latter’s cosmic soul opus Until the Quiet Comes.

Produced by Ellison himself, Apocalypse is a bitches brew of space voyager electronica, bedroom night soul and subtly fused jazz. It’s a superficially lighthearted record with a somewhat ambiguous dark heart, a revival of a time-honoured tradition of the soul and jazz records which Bruner grew up on. From the solemn and proud front cover through to the final orchestral triptych – dedicated Austin Peralta, a collaborator, close friend and labelmate who passed away earlier this year – Apocalypse is an album that is reflective and often melancholy, especially when compared to its playful, bright predecessor.

Above all else, this feels like the album where Bruner puts it all together, delicately balancing his absurd technicality with a more vocal approach to songwriting, spurred perhaps by the coherency of his lyrical themes, all balanced by stellar production and mastering from himself and Ellison. The term 'difficult second album' is thrown about far too often, but for Bruner this feels like a writing experience that was difficult and eventually cathartic, the sound of a young man coming to terms with the world around him as he shrugs off death and misfortune as just another set of obstacles.

At first listen, it’s the brazenly emotional nature of the lyrics that stand out, at least for those familiar with the backdrop from which Apocalypse emerges. Opener 'Tenfold' finds Bruner musing and coming to terms with loss, a theme that sticks with us throughout the album. “I am glad we got to share this life/maybe someday we will learn to fly”. From then on the themes of loss and heartbreak are never far. Even when displaying a little of that trademark gonzo wit on ‘Oh Sheit It’s X’ - a party grenade of wobbling funk - there’s hints towards what’s been left behind. “I just wanna party/you should be here with me” could be about a girlfriend or, perhaps, in the words of Biz Markie, just a friend.

But it’s not just about what he’s saying, but more crucially, about how it’s being said: Bruner’s vocals often previously felt like an afterthought, another shade for his palette, but here they’re front and centre. Whilst highlight ‘Heartbreaks + Setbacks’, certainly Bruner’s finest moment to date, rides LA producer Mono/Poly’s chirruping, searching electronica and Bruner’s languid bassline, the real thrust of the song is in his vocal, soft, soaring and burnished to a shine. This is a record where the music and the lyrics are inseparable, but not always necessarily synchronous. As such, a line like “Straight up seeing goblins/we don’t need to be frightened” might find itself laid over a dormant groove primed to explode, while “breakdowns, build ups, knock downs, throw downs” finds a places somewhere over a synth line spiralling skyward.

Musically, the upbeat summertime soul of prior recordings isn’t dispensed with entirely, but instead has been for the most part stripped down, removed of excess. This is, to borrow a phrase from the excellent Numero Group compilation of last year, ‘bedroom soul’ from Bruner’s very own personal space. ‘Without You’s languid bass and softly softly snare crash complements Bruner’s stories of long dark nights; “Maybe just a drink or two… another drink and it’ll slip”. ‘Evangelion’ is even more sparse, a watery bassline overlaid with a solemn snare and the faintest of chimes as our protagonist pleads with his listener “to open your ears and your mind”. The instrumental tracks, notably 'The Life Aquatic', aren’t just interludes either; Bruner exploring textures and tones (in this case, a mutant blend of g-funk crossed with Vangelesque nightrider) that previously wouldn’t have sat well in the context of a lighter record.

And of course, he can still kick it when he wants to, as all of those he’s played bass for would willingly testify. ‘Seven’ is a mellifluous piece of technicality, fluttering bass scrambling all over one of Ellison’s atypically off kilter downtempo beats, and the psychedelic ‘Lotus and the Jondy’ starts as the musical equivalent of a Mexican standoff, an ebbing groove tensed like a trigger finger, before exploding into a frantic sparring session between Bruner and erstwhile Mars Volta sticksman Thomas Pridgen, splattering the speakers with broken drum fills and clusters of plucked frets.

But the chord this record strikes hardest is an emotional and highly personal one; it’s a record that conveys with exceptional delicacy the transition from relative naivete to a more reflective and worldly view. For most of us, this happens in our twenties: much has been written on the subject of the ‘lost years’ when we establish; or fail to establish, relative stability, and peace with ourselves. For Bruner, this transition seems to have been provoked by a tragic event, but for most of us, it’ll be something experienced painfully and gradually for the better part of a decade.

The themes of Apocalypse are the milestones of these lost years: the parties don’t feel the same, the drugs don’t work, things were better as they were before, it’s not you it’s me, the never more apparent futility of the daily grind. Thematically, lyrically and musically, this is an album about overcoming those fears and hangups, an album about maturation, that opens with tragedy, ebbs and flows between highs and lows before arriving at a measured, yet optimistic swansong. As Bruner opines “Do you know time will pass you by, you’ll die, we’ll die?” it’s neither a morbid nor profound message, but the juxtaposition (is it bleak lamentation or casual acceptance?) somehow feels incredibly reassuring.

Apocalypse is very literally a rewarding and difficult second album, with its roots in tragedy and loss and its furthermost fronds in hope and moving forward, an album that challenges listeners with an incredible level of subtlety, hidden depths and wash of openly expressed emotion. It might even just be the album that best sums up what the Low End Theory beats scene in LA has always been about, the perfect blend of virtuous technicality and cosmic self discovery with a message delivered wrapped in genuine human warmth. Bruner himself says it best “Maybe, you’ll see, one day, we’ll be free…”