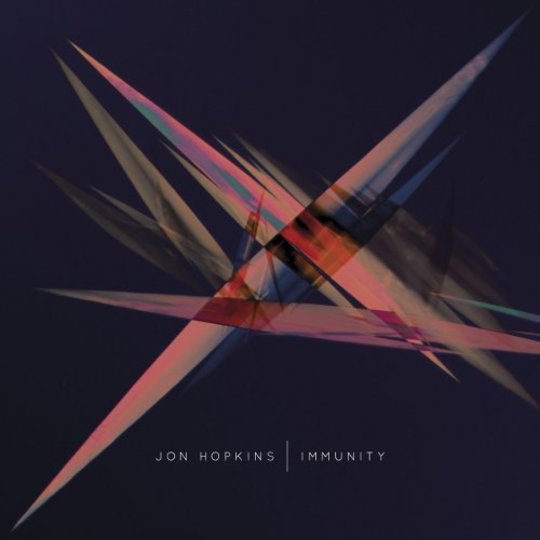 Taking its deserved place at the top of the UK albums chart, Disclosure’s Settle seems to be on an inevitable course to becoming the definitive electronic soundtrack to the summer of 2013. But while Disclosure use electronic music to evoke the nostalgic ideal of summer, Jon Hopkins’ sublime Immunity plays out like the more sober reality of the season. It’s rich, enrapturing and wholly at home within a sweltering context – but it leaves the space to acknowledge that the nights get just as dark as during winter, and that our anxieties are ultimately just as present.

Immunity is described as mirroring the trajectory of a night out, following its build up into climax, and the soft numbing of the come down. Whatever you think to that analysis, it’s nevertheless immediately apparent that this is a record with a bravely precise sense of pacing. Loading the front of the record with the deliciously physical ‘Open Eye Signal’, and the even more visceral ‘Collider’ – the album’s royal flush – Hopkins demonstrates a steely resolve in allowing the remaining half hour of the album to drain itself of its more obvious senses of power.

Moving through its back half with the close to rhythm-less ‘Abandon Window’ and the gorgeous mixture of manipulated found sounds and human vocal on its title track, Hopkins makes his boldest statements with his quietest music. While a lot of albums might feel the wilt of opening with – and subsequently sticking with – a 4/4 dance-floor statement only to move into vast passages of ambience and restraint, but with a record as masterfully conceived and arranged as ‘Immunity’, the gamble is no gamble at all.

Sometimes the manipulations of texture are purposefully jarring, such as when the bottom falls out of ‘Breathe this Air’, allowing a twinkle of piano keys to move into the space and form the track’s new backbone. Other times, some of the most prominent ingredients somehow find ways to ease away and slip out through the back door without you noticing, such as the metronomic breath of sexualised pleasure in ‘Collider’. At one moment mesmeric, the next you notice it to be entirely vanished – and like a bout of hiccups, you struggle to put your finger on exactly when the exit was achieved. Hopkins is the master of sleight of ear – at once keeping you fully attentive, as well as distracted from the movements in arrangement which keep the music so thrillingly alive.

Very occasionally Hopkins puts a little too much faith in the mileage of his subtlety – with tracks like ‘Abandon Window’ not exactly tipping into self-indulgence, but certainly spreading a fraction of his ideas a little too thinly, or pushing them a little past their shelf life. But almost universally, Immunity is an album which puts a well-placed confidence in rewarding the patience of the listener, melding together current club trends with a vulnerable humanity to create an hour-long arc of total immersion.