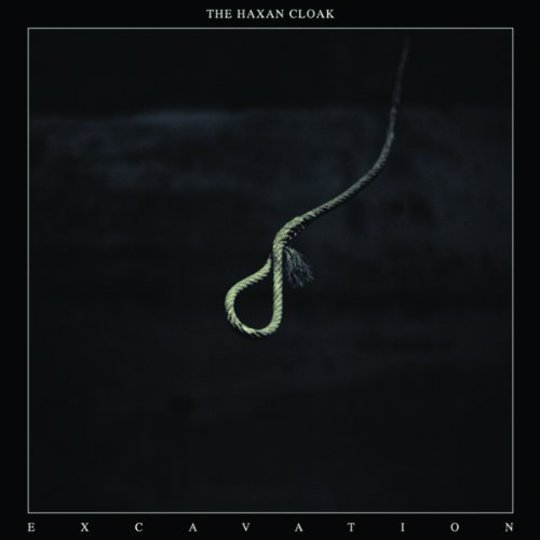 When we die, we probably just die. No harp-wielding cherubs. No 72 virgins. No God that looks or sounds like Morgan Freeman. No God at all, in fact.

This hasn’t stopped countless artists, writers and religious mumbo-jumboists from using their boundless imaginations to craft predictive representations of what might happen after. For Hieronymus Bosch it was a hellish damnation of amorous pig-nuns, stabby fish-bird people and playing the flute with your bum. In the artworks owned by Richard Harris recently exhibited at the Wellcome Collection, it’s skellington after skellington in a variety of different poses. For David Byrne it was “a place where nothing, nothing ever happens”. For OPM it was a halfpipe.

The Haxan Cloak’s 2011 self-titled debut soundtracked a character’s journey towards death. Its sequel, Excavation, represents the journey after death. And this journey, it seems, is no jollier than the one preceding it.

Like Raime, Haxan Cloak’s Bobby Krlic uses his mossy digital cauldron to concoct electronica which is the antithesis to the essence of rave. This is not for dancing your limbs off in a field of fluorescently-dressed new friends. It’s more suitable for being tied to a wooden chair in an abandoned meat locker with a damp sack over your head by a gangster who’s just harvested your kidneys.

As one might expect from its cover art of an ominously swinging noose set against a black background, this is bleak and spooky stuff. It’s an electronics-led close cousin to doom, drone and perhaps even goth (‘haxan’, after all, is Swedish for ‘witch’). It is also very, very slow, as if Earth’s Dylan Carlson had been raised on claustrophobic trip-hop and industrial dub rather than Sabbath and Slayer.

Not much happens, and what does happens is fairly frightening. If you thought Massive Attack’s ‘Teardrop’ went downhill after its opening ten seconds of moody heartbeat minimalism and that the beat was too fast in the first place, then ‘Excavation (Part 1)’ is the track for you. ‘Miste’ adds terrifying, murky, drowned voices to the eerie ambience. ‘Mirror Reflecting (Part 2)’ is like one of DJ Shadow’s darker moments, at half-speed, trapped inside a catacomb.

‘The Drop’ (or its first half at least) contains hints of optimism: the lighter keyboard tones that float among the dystopian throb evoke one of the happier scenes from John Carpenter’s filmography in which, for a short time at least, nobody is being pursued by a mutant alien or masked psychopath.

In his 1956 autobiography, the political cartoonist David Low described his ‘Infallible Remedy for Depression’:

Retire to quiet room, lock door, draw blinds, tightly bandage eyes and chin, lie down on back, fold hands on chest, clear mind, remain completely and stiffly still for 20 minutes imagining you are buried under six feet of wet earth. Then get up, go to a lively restaurant and have a good dinner. After that if the world hasn’t taken on a new interest and you aren’t glad to be alive, I’ll eat my hat.

A similar psychological effect can be achieved by listening to the whole of Excavation, immediately followed by They Might Be Giants’ ‘Doctor Worm’.

Even without this aural dessert, however, there is something strangely life affirming about The Haxan Cloak. As the Richard Harris exhibition showed, by enabling us to momentarily confront our own mortality, morbid artistic meditations on death can be oddly and overwhelmingly uplifting.