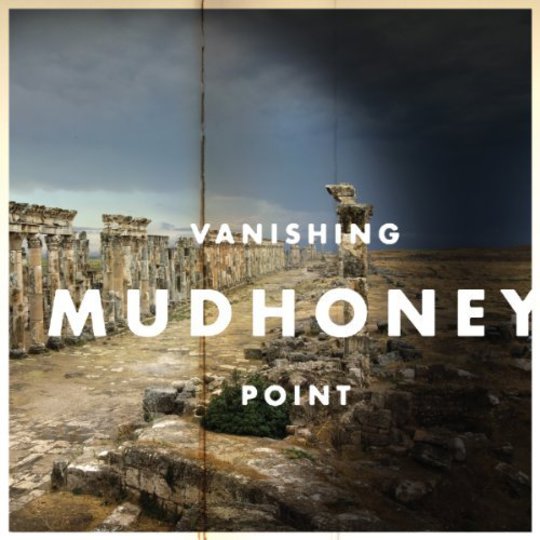 There’s a brilliant paradox about Mudhoney, that a band so caustic and cynical can be so oddly comforting. The seasons come and go, technology evolves, Presidents rise and fall, pop music is ripped apart, reinvented, ruined and resurrected, the world turns but Mudhoney remain, laughing at everyone else's expense and outlasting them all.

Like close cousins the Melvins, Mark Arm and co changed the world in a second-hand sort of way, playing John the Baptist to Nirvana’s JC, being the darlings of the Sub Pop first wave and then being left behind as various Grunge behemoths pushed forward without them and imploded. You get the impression Mudhoney preferred it that way, out of the limelight they’ve carried on trudging round the world peddling exceptional sludge-pop gems in the form of belligerent proto punk with shiny choruses twinkling amid the muck.

Twenty-four years on from their debut, and five years from their last release we arrive at Vanishing Point, the ninth Mudhoney album. While it’s very much business as usual - groove-led-Stooges-acid-pop with added screaming - it sounds so gloriously Mudhoney it offers a thrill akin to Popping Candy fizzing in My Little Pony blood.

Kicking off on a proper drum wig-out from Dan Peters, guitarists Arm and Steve Turner soon root Vanishing Point firmly in the garage where any good Mudhoney record belongs, with stop-start opener ‘Slipping Away’ paying as much homage to Detroit 1972 as Seattle 1989, while ‘I Like It Small’s hand claps and riffage maintain the pace and the cheeky mardyness. As openers go, they’re snapshopts of fun, zippy doom: what Mudhoney have always done best. And so it continues. ‘What To Do With The Neutral’ takes us into minor key intensity but does it with grace and humour, Arm’s atonal yelp telling us to ”embrace the positive, reject the negative” but admitting he doesn’t know what to do with the “neutral” which is ”Neither here nor there”. It’s standard Mark Arm misanthropy, pissing on the chips of the hippies and the cheerful. He follows it up with a punk rock blast through ‘Chardonnay’, a plea for unhelpful booze to ”get the fuck out of my back stage”, because “I hate you Chardonnay”, it’s Iggy Pop via the Dead Kennedys (the riff from ‘Holidays in Cambodia’ even makes a one-bar cameo). By ‘The Final Course’s none-more-grunge riffing Vanishing Point has already blown almost every noisecore contender of the last year out of the water (with the honourable exception of Sub Pop’s newest buzz, METZ) and it’s only five songs in.

Having reasserted pop dominance the band move onto what, in more civilised times would be called ‘Side two’ and indulge in some Black Sabbath trip-outs (‘In This Rubber Tomb’) and gloom pop (‘Sing This Song of Joy’). ‘The Only Son of the Widow from Nain’ harks back to the knockabout psych-metal-grunge-n’roll of Sub Pop's late Eighties heyday, of Nirvana’s Bleach and tha Honey's own Superfuzz Bigmuff, though if you’re waiting for an out an out update of ‘Touch Me I’m Sick’ or ‘Suck You Dry’ you may be waiting some time: those glorious monstrosities are the sound of a young band, something which Vanishing Point certainly isn’t. This is the sound of seasoned confidence, of a group who know exactly who they are, and what they do, and how well they’re doing it.

The album closes on ‘Douchebags on Parade’, a brilliant and acid-funny stab at the “satisfied and entitled” jock bands that Mudhoney long ago rejected. ”Here they come, they’re all number one” deadpans Arm, ”I want a number two. No, after you... Douchebags on parade.”. Still bitter. Still brilliant. Still here.