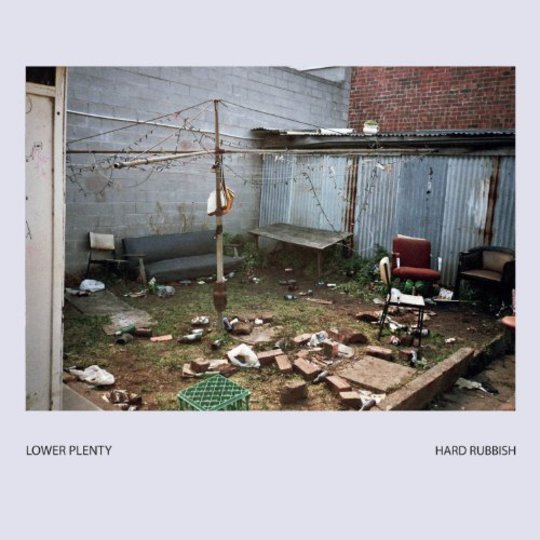 Most of the cuts from Lower Plenty’s second LP Hard Rubbish sound as if the band members decided on the bare bones of a song – a key in which to play, perhaps, and a tempo to stick to – and then put in ear plugs to actually record the thing; completely absorbed in their own improvisation, entirely divorced from the other musicians around them. The result is not only a hauntingly engrossing record - in its ability to square the circle of being at once unbearably bleak as well as coyly enchanting - but it’s also a perfect synthesis of form and content, translating loneliness into 20 minutes of unrelenting intensity.

“Loneliness is the biggest killer of them all”, goes the arresting first line of ‘Strange Beast’ – and indeed, these themes of isolation, sadness and destitution are uncannily reflected in the music; arrangements which sound like their components are skulking about as far away from each other as possible, without the wheels coming off altogether. There’s a vast sense of space between the players in these songs, and by that it’s not to be understood that the album cultivates an airy production – indeed, the mix of songs like ‘Dirty Flowers’ can be positively busy, with alt-country guitars, clattering drums, and out and out feedback competing with the dainty vocal line. Instead, the band members put an incredible distance between one another in purely performative terms, each players’ intentions sounding entirely detached from all others’, conveying a sense of isolation stirring in its completeness. Few live albums make the absence of emotional engagement so immersive.

‘Strange Beast’ is the perfect example: a duet where the male vocal uses the microphone as a spited Dictaphone, while the voice’s ostensible female partner sounds as if she’s languidly joining in from another room in the house. The chasm between the voices is such that it’s hard to believe that these songs were ever even rehearsed together, much less recorded in the same location. The album’s opening song is about receiving a late night phone call. “You talk such nonsense. Don’t you know I’ve got work in the morning?” goes its final refrain, setting the tone for the album perfectly. Any attempts to reach out and connect are batted away immediately, the characters of the lyrics and the instruments in the arrangements preferring to revel in solitude.

The weary dissonance of some of these songs plays out like subversion to the point of outright sabotage. And the few songs which do actually enjoy a certain degree of togetherness to the musicianship still conform to the ruggedly beautiful aesthetic of imperfection by sporting a doubly undercooked or fraught vocal line. The gorgeous twinkle to the riff of ‘Friends Wait’ threatens to provide respite from the gloom, but the barely executed drawl of the simple word “sadness” drags the song back into the album’s mire. It’s little over 20 minutes long, and has incredibly sparse, softly organic arrangements, but ‘Hard Rubbish’ succeeds in achieving a density which makes the LP feel twice its length, conveying the slowness of time spent in sorrowful solitude perfectly, and – most amazingly of all – succeeding in turning the absence of feeling into something intensely affecting.