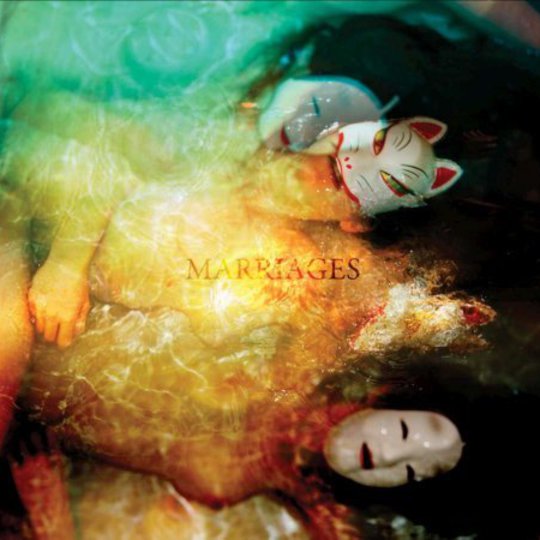 Marriages' debut is a wonderfully thickly textured release. Comprising six tracks of heavy, swirling guitars and the occasional distant vocals of Emma Rundle, Kitsune evokes a sensation of departing-consciousness - the gentle noise before sleep or the static background sounds of transmission. Marriages accordingly turn the volume up or down on their compositions to phase the listener through states of alertness, from near silence to overwhelming power chords.

Formed as a splinter trio from Red Sparrowes - themselves an impressive instrumental group - Marriages' prime concern appears to be creating a sensation of slow movement. Kitsune opens with ‘Ride In My Place’, the band immediately throwing everything they have into the composition. A guitar riff peals with the same downward trajectory that Blonde Redhead always make so appealing. Quickly another layer of guitar is injected and synths fold over. Chord sequences occasionally prick upwards for a momentary euphoric about turn but predominantly the song floats on a low, wistful tone. The song then bleeds beautifully into the following track, ‘Body of Shade'.

As the song establishes itself, Rundle’s lyrics seem a reflection on decay, repeating “my body, gone forever”. Her voice is embellished with a slightly pitched doubling that has a haunting effect. The song exerts washes of sound in such a tempered way that it feels almost aggrieved to be progressing. The drums remain locked and unfaltering, the riffs either intricate or droned. ‘Body of Shade’ uses the same formula as Seam and the more majestic exponents of post-rock, who always expanded their motifs in subtle increments. The neck jut starts small and develops with soft, steady inevitability into the thrashes of a crescendo.

With each track seguing into the next, the band highlight the inherent, pivotal monotony that creates the axis from which the dramatic flourishes can dive. Marriages appreciate the potential power within this balancing act and do more than enough to keep from being lost in the morass of ineffectual post-rock. As ‘White Shape’ develops it quickly launches into a thrash of distortion and bass chords before receding into a sole guitar riff and sparse drums once more, to again build new structures of distortion and glacial vocals in ‘Part the Dark Again’.

As a closing track ‘Part The Dark Again’ crystallizes the components that make Kitsune such an arresting listen. Peace and tranquillity evolve into nightmares and pleas. Soft guitar lines slowly become infected with dischord and grow into dark, despairing anthems. The vocals lull this process along, soft and low before soaring over the burning power chords.

Kitsune is a powerful and fragile album and composes itself with the grace required to step ahead of the current glut of bands that are revisiting the post-rock genre, believing that all that all post-rock requires is distortion pedals and patience.