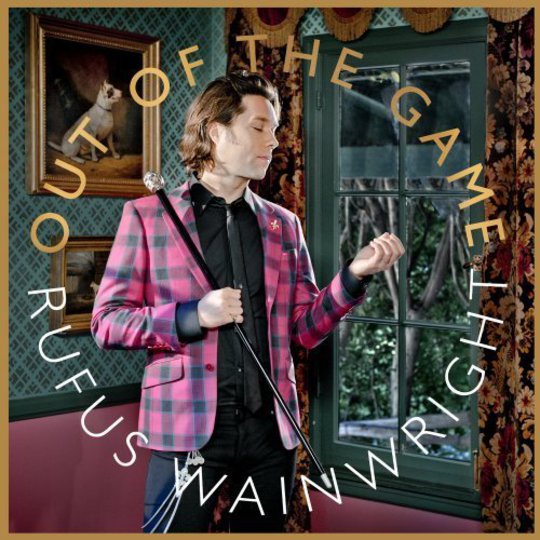 On a recent voyage into the depths of online procrastination I found myself watching some Damien Hirst interviews. The way he spoke about his art brought to mind Picasso’s famous conviction of how every child naturally springs and fizzes with creativity, yet it is only artists who remain sparkling and uncorked as adulthood dawns. It makes sense. Hirst joins Rufus Wainwright in that tiny sliver of the population for whom life revolves around the limitless exploration of their own imagination - days, months, years spent climbing ladders into the stars.

‘I just wanted to find out where the boundaries were. So far I've found there aren't any. I just wanted to be stopped, and no one will stop me.’ Says Hirst, though the exalted sentiment would probably be worn better by Wainwright. After all, here is a man who can count an eponymous velvet-encased 19 disc box-set as one of the less indulgent moments of his career. So, after the self-penned opera, the Judy Garland shows, the deeply personal catharsis of All Days Are Nights - where might Rufus Wainwright have set the boundaries for his seventh studio album? Or is this asking a rather foolish question?

Enter Rufus as Liza Minelli in sparkling ball-gown, pirouetting across the stage singing ‘Make Me A Star’ as streamers drift from the rafters to the eternal ringing of applause.

Not really. But this is the image I’m struggling to shake after spending a couple of weeks in the company of Out Of The Game, a record that leaves no seam un-burst in its insatiable quest for mainstream adoration and success. Of course such adulation has always represented Plan A for Rufus, so the enlistment of Mark Ronson on production duties is perhaps no surprise. ‘It’s the best work of my career’ says Mark, ‘It’s the most pop album I’ve ever made’ says Rufus - so it’s great then right..? Right??

It pains my Wainwright-loving heart to suggest otherwise - but this is an expensive, tame record where too many session musicians may well have spoiled the broth. The first time I heard the title track I regretted it. The slippers and pipe guitar intro phoned-in from 1972, the cruise-ship harmonies, the drums that waft over like the demo function of a Korg Triton played by a music shop employee. You could argue the songs are luxurious, but it’s a Michael Jackson shopping-spree brand of luxury. Replica Ming vases and golden elephant statues; extravagance sans sentiment.

Take the decadent ‘Rashida’ for example. Hark as it unfurls into mellifluous operatics, the guitar ascending upon a throne weaved from Brian May’s hair, then onwards through silken drapes of choral vocals towards the libretto itself - Rufus - centre-stage and deflated, regaling us with some vague ‘thankyou’ note to Anne from Parks and Rec. There’s a pervading sense of disconnect, and whilst Rufus is no stranger to ostentation, here the thousand layers of gloss and sparkle almost serve to airbrush him out of his own album.

That‘s not to say it isn‘t catchy of course. There’s a nuanced Scissor Sisters bounce to ‘Bitter Tears’, a Roaring Twenties pomp in ‘Welcome to the Ball’, and the loungey ’Respectable’ could soundtrack any number of smoke-filled B-movie bar scenes. Still it's hard to escape the feeling that in aiming his sights at the largely imaginary demographic of ‘pop music consumers,’ Rufus has accidentally neutered himself. In previous albums the lavish grandeur of songs like ‘Go Or Go Ahead’ were matched in extremity by their creator, a man temporarily blinded by meth abuse. Elsewhere in quieter moments Rufus has always channelled his turbulence through piano, voice and virtuosity of arrangement. But when hitmaker-for-hire Ronson is around all that kinda goes out the window - thus rendering Out Of The Game a curiously passive listening experience. It’s poppy, it's fun, it's sometimes slow, its sometimes upbeat, but its never magical.

‘Montauk’ sees Rufus Wainwright serenading his recently newborn daughter Viva, and it’s a moment that crystallises the deep personal contentment that Rufus appears to have grown into with age. Like anyone, it suits him well. The siren-like allure of the vocals are a truly touching moment, and in context of the rest of the album it calls to mind the old adage that the best way to gain approval is to not need it. From Bowie and Boy George to Adele and Gaga, pop embraces characters, stories, idiosyncrasies, single-mindedness, vision. In the end there isn’t really a need for Rufus to team up with a superproducer to ‘go pop’ - he’s already the biggest superstar there is.