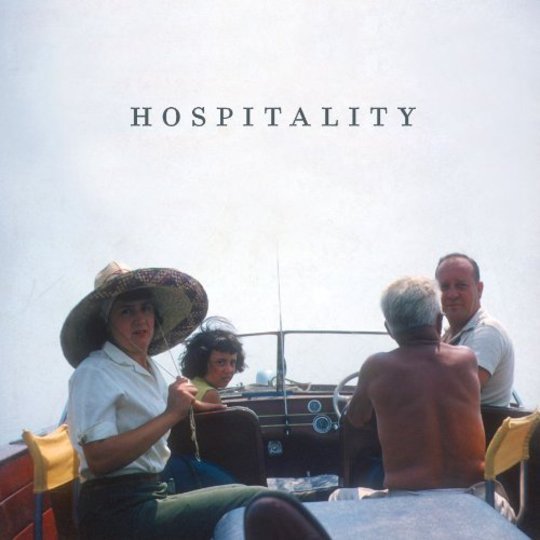 Hospitality’s debut self titled LP is pitched squarely within that liminal zone between adolescent angst and the jaded security of pre-middle age in your first flat with your third girlfriend; ten breezy indie-pop tracks channeling the nonchalant breeziness of twenty-something existence in the city. It's a record waiting to be squashed under the pressure of making life choices which will lock you into irreversible patterns. There are songs about the difficulty of long distance relationships and deciding whether to hedge your bets with one or cut your losses; the gut-chilling panic of finding yourself on a career path which leaves you perpetually dissatisfied; and - of course, that timeless old chestnut - never having any fucking money. Lead singer Amber Papini, however, delivers these anxieties though the quirky gauze of someone who believes that things will turn out OK somewhere along the line, so let’s just enjoy the ride. Her half-shy, half-strident tones slink through sugary melodies atop sparkling acoustic guitars and gentle drum work, offering glimpses into lives of hard work, simple pleasures and tough decisions. Every song on Hospitality hints at the realities, fears and dissatisfactions of post-education system existence (“Is it gold? Is it snow? Is it all the debt I owe”) as well as the joys and excitements (“I’m not tired of you staying here / Up all night, don’t have to sleep”) but always with a cool sheen of cynicism and irony cleverly blurring the lines between the two tones.

The arrangements speak to this duality of tone - the liberty of youth being on your side, but the tick-tock fear of it not lasting forever. While the general blueprints of these songs are that of a Belle & Sebastian-esque acoustica - lightly brushed drum skins, simple rhythms and earnest melodies - there’s always extra clutter just under the surface, subtle flourishes of texture skittering up through the arrangements like restless twinges of anxiety, ready to explode on a thirtieth birthday. It’s quite telling that ‘The Right Profession’ - the song which describes dissatisfaction and disaster in the album’s most unambiguous terms (“staring at the wall, the same old job, it’s not the right profession”) - is the most peppy, uptempo and immediate track on offer, teeth-grittingly cheerful in the face of life’s inevitable disappointments. It’s as if Hospitality are using these songs to channel gnawing anxieties about their futures on one hand, while using insightful lyricism and breezy pop stylings to romanticise the plight of barely scraping together rent on the other. “What have you got to prove?” asks Papini on ‘Liberal Arts’. It’s a good (and comforting) question.