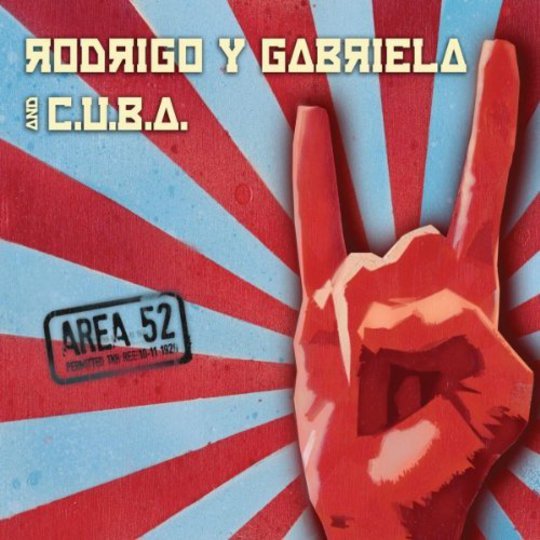 Rodrigo y Gabriela’s latest album has offerings from their last two releases re-interpreted, with the backing of a 13 piece Cuban orchestra. It is a confusing listen, but one that is certainly filled with the performers’ joy and energy.

It was recorded as an intermediate step, due to a sense of uncertainty in recording an entirely new album. Once synthesised down, this is left wide open to the notion that this is Rodrigo y Gabriela ‘doing a Buena Vista’, or somewhat more unfairly, ‘a Santana’, or maybe more interestingly, if schmaltzy, ‘a Norman Brown’.

It is presumptive, but the above description may be something that the act themselves would be happy to endorse. Whilst it’s a pungent mix for your average music mole, the reality is that it is a compliment to their virtuoso guitar abilities. These are unquestionable. It’s all the arranged bluster that sometimes sends this down paths that vary canyon-like between wonderful and woeful. This is a disappointing hit rate when considering that orchestral arranger, Alex Wilson, is a colleague of film scorer extraodinaire Hans Zimmer.

Opening with 'Santo Domingo', originally on 11:11, the full range of conflicts come rushing out of the speakers. The guitar playing is jazz-smooth; fast, frenzied and passionate, a delight to hear. The punctuating brass blasts bring an unwanted bluster and when wah wah playing creeps in it leaps over the line. In contradiction a simple piano solo brings serenity to an otherwise manic and over zealous opening.

With large, developed arrangements surrounding each song, this is maybe understandably the album that is least about the guitar playing. The ongoing Cuban joy tires in many instances though not as a rule. Yes, the slipping into the guitar refrains of 'Hanuman' really are too Santana ‘Smooth’ to be bearable, yet there are standouts that make this a worthwhile listen.

'Juan Loco' has the snapping metal-inspired guitar playing without a literal thrash guitar sound to smash it into the realm of nonsense. There’s a heavy psychedelic feel. Trumpets rally and interplay with the other instruments with nuance and poise, as rhythm guitar constantly hammers in a satisfyingly irreverent away. This intensity has the fervour of a blessed heat rather than the sway of a tourist hungry street troupe on London’s Southbank, and the whole song is a rhapsody of energy.

Similarly 'Master Maqui', in keeping the guitars and stringed instruments in the forefront and the backing arrangements at lower levels. This gives a welcome darker shade to the virtuoso playing. The guitar lines ebb with the insistence of a minimalist composition, fluttered with moments of flute pairing for an almost humorous effect, though a brass segway again thumps in too heavy handedly, a hotel band in Vegas’s dirtier joints, not a Rat Pack supporting spectacle. 'Logos' is the simplest song on the collection and by far and away the best; off beat percussion, guitars that sweep and saw and piano soloing that skitters around the fanned hands.

This album will infuriate many but bewitch some. It’s certainly a record that wants to make you move; maybe the problem is that it’s trying too hard to push the duo's aesthetic into more open waters.