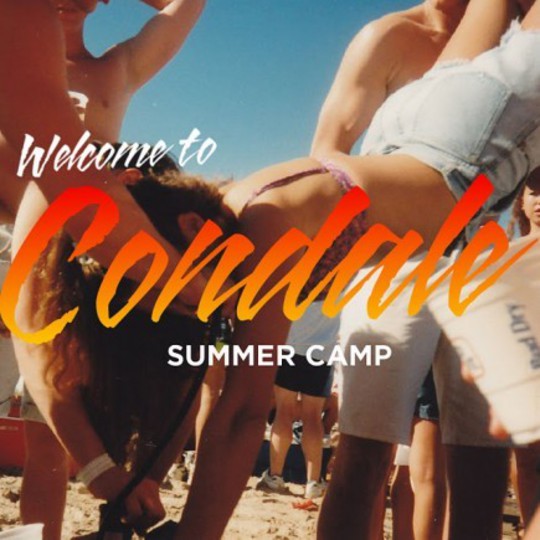 It is, of course, scientifically impossible not to refer to the Eighties when listening to Summer Camp. The decade upon which we bestow so much scorn, yet nonetheless, have become belatedly willing to accept its terrible cardigans back into our collective wardrobe. Straight out of a John Hughes screenplay, Welcome to Condale pulls off the feat of being thoroughly POP - polished and plump, preened for the screen and sequinned to the hilt – yet, somehow, marvellously INDIE. Shy, retiring, unutterably fearful of its own grandeur, blissfully unaware of its sublime vocal melodies and emotive synthesisers.

The album kicks off with recent radio-botherer ‘Better Off Without You’, Elizabeth’s sweet cherry vocals betraying the song’s bitter sentiment: “if you said you’d never waste my time / I’d be so happy... I’d laugh the whole night through.” It sounds deliciously like The Bangles, jumbled up with The Pipettes and the Schla-La-Las. It’s ‘singing-into-a-hairbrush in front of the mirror’ music, yet way more refined. With camera-ready make-up and a champagne smile. The following track, ‘Brian Krakow’ owes more to Roxette than anyone else. That might sound like a sly dig. It’s not. Roxette on a Bauhaus tip. Not entirely sure that’s ever been done before, but Summer Camp pull it off pretty neatly.

‘Nobody Knows You’ continues in a similar vein with the synthetic drums hitting on the off-beat and fuzzed-up vocals casting a shadow over the sunnier tunes. When Jeremy and Elizabeth duet on ‘Down’, the schmaltz-factor hits 11 and anyone with even the mildest allergy to cutesy pop might well feel a tightening of the chest at this point. Given that most of the album is hinged on the fragility of the boy-girl relationship, it feels only right that the two voices should meet at some point and it makes for a heavenly union.

Taking a departure from the theme of love and heartache, the title track takes a sideways glance at suburbia; returning home from the big city to small-town Middle England (though equally it’s hard not to picture a white picket fence, complete with dysfunctional family somewhere in deepest Middle America). It’s one of the stronger tracks on the album, which, after a while, can start to feel a little contrived; like they found the Pretty In Pink setting on their keyboards and set out to see if they could construct an entire album around it. As a collection of songs, it has a strong identity and is easy to love; Elizabeth’s voice is enticing and the melodies are endearing. As individual tracks, though, they get a little lost amongst each other; overwhelmed by their own perkiness.

Landing, as it does, at the rear end of autumn, Welcome To Condale is clearly being released at entirely the wrong time of year. They’re not called Summer Camp for no reason and this rotten scheduling has damned any chance it may have had of becoming the perfect soundtrack to your hot, sweaty and disastrously lonely National Express journey to the coast, to stare wistfully at couples (of which you are not half) snogging carelessly on the pebbles.

It does, however, contain enough tracks that will serve you well, should you wish to recreate your own summery indie disco in the comfort of your own home.