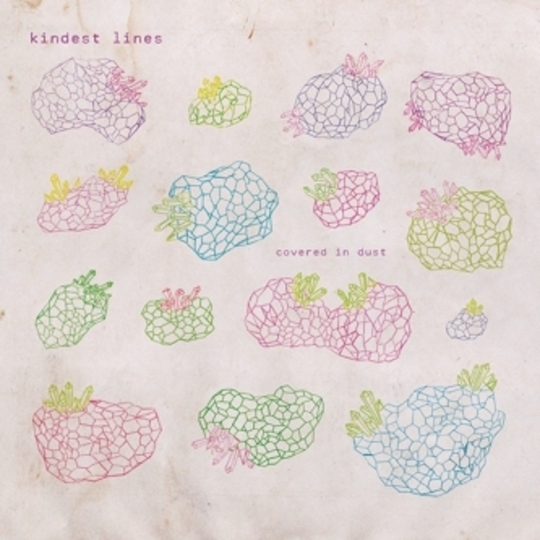 While history has shown that most British artists tend to draw on their Stateside counterparts for inspiration, the tide has turned somewhat in recent years. Labels like Slumberland, Captured Tracks and Wierd Records, along with bands such as Wild Nothing, Beach Fossils and Procedure Club have all proffered musical more befitting of the Eighties English underground. Although not entirely new, it has engendered a refreshing change from familiar old alt. rock, and as last year's Gemini and Beach Fossils long players proved, reaped significant rewards in the process.

Bearing that in mind, it probably comes as no surprise that Covered In Dust, the debut album from New Orleans trio Kindest Lines, also comes steeped in borrowed references from the back pages of Robert Smith and Bernard Sumner. However, what sets it apart from many other wannabe miserablists are the intricate dynamics between its three creators, most notably the eerie vocal performances of Brittany Terry.

Although relative newcomers, Kindest Lines demonstrate a subliminal poise and grace throughout Covered In Dust that belies their youthful exuberance. Indeed were it not for the fact that the band make no secret of their minimal three-piece collective one would be mistaken for thinking their number was double, such is the level of sounds and ideas bursting from within the record's delicate confines.

Take opener 'Hazy Haze' for example, where Spector-esque echoed drums fall into a dazzling array of layered keyboards and Faith-era Cure riffs, intrinsically topped off by Terry's ethereal vocal. While pretty much all of the lyrics here (and throughout Covered In Dust) prove largely inaudible, her ghostly presence produces a similar impact to fellow leads of a similar mindset Liz Fraser from the Cocteau Twins or Barbara Gogan of The Passions, both former cohorts of The Cure during their earlier years as it happens.

The mix and match configuration of Covered In Dust is perhaps best demonstrated when Kindest Lines take a more poppy angle. 'Strange Birds' takes a more resilient stance, its processed backbeats and sashaying riffs bringing to mind both New Order's 'Everything's Gone Green' and High Places 'When It Comes' in equal measures. Similarly, 'Prom Song' is a slickly arranged slice of errant surfgaze that wouldn't sound out of place in Glasvegas or The Jesus & Mary Chain's outer recessed back catalogues.

Overall, there's little by way of disappointment on Covered In Dust, and even when 'No Perfect Focus' reverts to the tried and tested cathedral of sound methodology, the results are once again faultless. Measured and inspired from beginning to end, Kindest Lines may wear their influences heavily across several layers of dark clothing but there's more than enough on display here to elevate them above the rest of the symbiotic ashen-faced crowd.