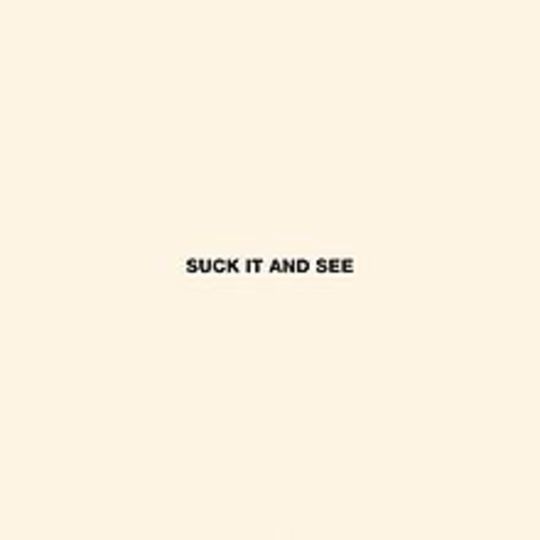 Forget the high profile side projects, celebrity girlfriends, induction into Josh Homme's inner circle or Stateside recording marathons both with this and its predecessor. No, the real defining moments in the seachange enacted by Arctic Monkeys can be illustrated precisely by two separate events. Rewind the clock back to Saturday 28th July 2007, and take a trip to Manchester's Old Trafford cricket ground you'll find a band delighted yet somewhat ashamed by the adulation surrounding them.

Though cementing their position as the UK's biggest musical success story in a decade, the sight of aggressive lads fuelled by cheap lager and girls caught short, dropping their pants and crouching brazenly in the middle of the audience must have horrified a band who seemed to have attracted a fanbase who'd misinterpreted the irony of songs like 'Mardy Bum' and 'A Certain Romance' as semi-autobiographical statements instead. Hurriedly returning to the time machine, the second destination would be the Leeds festival, Friday 28th August 2009. Four days earlier they'd released Humbug, their third and most diverse long player to date, and rather than play the greatest hits set expected of a major festival headliner, they chose to play the record pretty much in its entirety bar the odd single and obligatory Nick Cave cover. Reviews at the time were lukewarm (except here). They'd grown beards and bought plaid shirts, yet this performance undoubtedly marked the 'coming of age', the point where those fans reared on stories of riot vans and looking good on dancefloors either stagnated in their own Whatever People Say I Am, That's What I'm Not vomit, or embraced the changing tide Alex Turner and co. had spent two years formulating.

Looking back, while Humbug probably wouldn't be at the top of many Monkeys devotees' lists of favourite records. But there's little doubt its longevity will far outweigh both of its predecessors. Whatever People Say I Am... in particular, while undoubtedly capturing the moment like no other album since possibly Definitely Maybe eleven years prior, sounds dated now. Indeed the stepping stone that was Favourite Worst Nightmare between records one and three could almost be recognised as being the band's portal to a brave new world. Let's not forget that many of their contemporaries from Sheffield's initial post-millennial flurry - Milburn, Bromheads Jacket, Little Man Tate, and even long standing partners in crime Reverend And The Makers have all either disappeared permanently or embarked on an indefinite hiatus. The scene which they spawned may have dissipated but their ambitions always lay far beyond the run down steelworks and factories of South Yorkshire.

So, at the back end of last year, the band once again decamped to the States, this time Los Angeles, with producer James Ford once again in tow. While it's fair to say expectations would be nearer the sprawling landscapes of Humbug than the gritty backstreets of Whatever People Say I Am... or Favourite Worst Nightmare, Turner's excursions both as a Last Shadow Puppet and on the recent Submarine soundtrack (one track of which, 'Piledriver Waltz', makes a cameo appearance here) suggested any speculation about the direction pursued on Suck It And See would be something of a lottery.

Despite the band's initial protestations that Suck It And See was a return to poppier days, the first offering for public consumption, 'Brick By Brick', suggested otherwise. If anything, it seemed as though the band were playing it safe, several naysayers even hinting at the possibility 'Brick By Brick' was little more than a trite leftover from the Humbug sessions. Certainly as a taster for the album its derivative plod and clumsy lyricism was about as appetising as a bar of soap, and even listening to it in the context of the other 11 songs on Suck It And See, it's difficult to see where it fits into the grand scheme of things.

That said, for the most part Suck It And See is a solidly constructed, well-defined record. Opener 'She's Thunderstorms' sashays out of nowhere via a blistering cascade of drums into a psychedelic waltz The Black Lips would be proud of. The other day while playing this, my better half commented it reminded her of The Jesus and Mary Chain and having stuck 'She's Thunderstorms' on back-to-back with 'Some Candy Talking' she has a point. Turner's lyrical playfulness comes to the fore on the excellent 'Black Treacle', its slow build up punctuated by lines such as "Lately I've been seeing things, belly button piercings, in the sky at night, lying side by side." We'd like to think it's about a certain former T4 presenter.

Probably one of the most understated facets of the Arctic Monkeys' past recordings has to be the guitar work of Jamie Cook. Here, as on the shoegazey glissando of 'The Hellcat Spangled Shalalala' or re-recorded 'Piledriver Waltz', there are echoes of more textured artists like The Boxer Rebellion or Coldplay than anything previously expected of this band. In fact, the former stakes its claim as one of Suck It And See's highlights, Turner's beguiling "Things are getting complicated in the eye of the storm" ringing true. 'Don't Sit Down 'Cause I've Moved Your Chair' you've all heard, and while being passable compared to 99 per cent of daytime radio fare on offer at this present moment, it takes a back seat alongside 'Brick By Brick' as one of Suck It And See's weakest links.

In stark contrast, the mid-point short sharp shock that is 'Library Pictures' is the sound of a band revelling in fresh surroundings. While not that dissimilar to 'Pretty Visitors' off Humbug, it has a real go out and get 'em garage spirit and would have been a more apt choice as a lead single. Similarly, false starts and distinct resemblance to Iggy's 'I Wanna Be Your Dog' as far as riffs go, 'All My Own Stunts' also puts forward a convincing argument as one of Suck It And See's focal points. Layered instrumentation coupled with Alex Turner's request "Put on your dancing shoes and show me what they do, I know you've got the moves" and the relentlessly incisive backbeat courtesy of Matt Helders make this a cast iron live favourite in waiting. Even old mucker Josh Homme provides backing vocals, although largely inaudibly.

Standing out from the crowd, and arguably one of the best songs the four-piece have composed in years is 'Reckless Serenade'. Part ballad, part Fifties style rock and roll gyrator, Turner makes allusions to "Topless models doing semaphore" before declaring "Listen to the voice of reason" only to "...reach his answering machine". Like the famous last words of a romantic desperado, 'Reckless Serenade' unashamedly deserves its place at the top of the pile alongside the equally flawless '505' and 'Cornerstone'.

'Love Is Like A Laserquest' may proffer visions of Johnny Cash singing the blues with Queens Of The Stone Age as his backing band, but really it's Alex Turner's ode to The Beatles 'When I'm 64'. "When I'm pipe and slippers and rocking chair, singing dreadful songs about something" he opines before cutting his subject down to size in an instant ("I've found a better method of pretending you were just some lover"). The title track meanwhile takes the country road even further into melancholia territory, insisting "I poured my aching heart into a pop song" before crying out mournfully "Be cruel to me 'cause I'm a fool for you." Never before has Alex Turner bared his soul as much before on record. Closer 'That's Where You're Wrong' could have been REM or The Go-Betweens in a past life, Cook's jangling guitars marrying precisely with Nick O'Malley's sturdy four-string, Turner inviting his beau to "Make a wish that weighs a tonne". While not quite as memorable as each of the finales on Whatever People Say I Am..., Favourite Worst Nightmare or Humbug, its a fittingly poignant full stop to what is essentially a pensive collection of songs.

It would be churlish to suggest Suck It And See is Arctic Monkeys' finest record to date. By the impeccably high standards they've set so far it ranks as a good rather than great album, and only deepens the mystery as to where the Arctic Monkeys may venture next, both as a group and in their various solo guises.